"This Is 40" is being dismissed as a self-indulgent, cringeworthy mess. But that's what makes it so brilliant 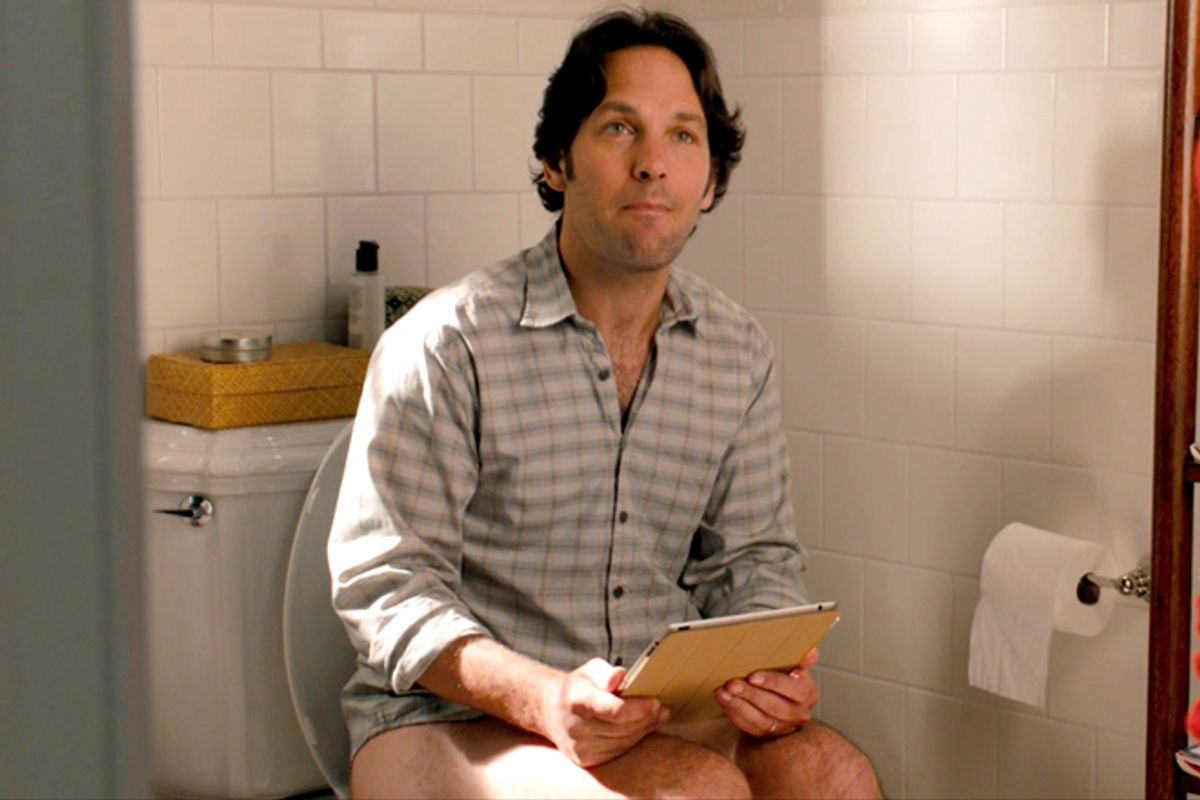 In the first week of its release on Dec. 21, "This Is 40” has been met with poor box-office sales and middling reviews, with many critics branding Judd Apatow's latest as sloppy, overlong, self-indulgent claptrap. Both receptions are a shame, since "40” marks not only a continuation of the filmmaker’s creative evolution but also a culmination of what has been most compelling in comedy over the past couple of years. With its unflinching honesty, ruthless candor, and fascination with uneasy truth over pat payoffs, Apatow’s latest feels less like his previous work and more like a 132-minute episode of "Louie." Sure, the aesthetic is markedly different — "This Is 40” has the gloss of slick studio product — but the spirit and sensibility are the same: It's a stark autobiography and uncomfortable confession, where laughter is the casual byproduct of situation and personality (rather than the other way around) and dramatic beats ring painfully true.

In his earlier works — both as writer/director and as producer for his ever-expanding brood of cinematic progeny — Apatow’s primary thematic concern was a reluctance to grow up. Films like "The 40-Year-Old Virgin," "Knocked Up," "Forgetting Sarah Marshall" and "Pineapple Express" concerned men desperately clinging to a perpetual adolescence, and the women who loved them, in spite of themselves. If his shift in preoccupation to markedly more “grown-up” matters (with only the underseen "Funny People" as the buffer) seems sudden, the characters share that sense of discombobulation — you just wake up one day and you’re approaching middle age, and you have a teenage daughter who has boys telling her she’s hot, and your wife is lying about her age, and all you want to do is disappear with your iPad and play Words With Friends.

“Boys will be boys” is an eternally relatable theme, and the Apatow films that have lived there have enjoyed a cultural ubiquity and commercial success that must have been hard to walk away from — and yet he did. With "This Is 40,” the filmmaker has created a picture so personal that it feels less like narrative than diary: Paul Rudd is the Apatow avatar, playing opposite the filmmaker’s wife, Leslie Mann, and their children Maude and Iris. Their family conversations, which center on television consumption and wi-fi usage and privacy boundaries, feel less written than transcribed, and when the kids aren’t around, the parents jokingly disparage them (“They’re selfish assholes!”) yet grant them begrudging respect (“She’s out-playing us”).

If their frustration with the kids is played for laughs (like Louis C.K.’s “she’s a bullshitter” jokes in his "Chewed Up" special), their interactions with each other cut closer to the bone. The AV Club’s Scott Tobias has called "This Is 40” “Apatow’s Cassavetes movie.” It's an apt comparison. Aside from the picture’s leisurely running time and casual intertwining of on- and off-screen relationships, it approaches the male-female dynamic with a searching, unforgiving thorniness that occasionally borders on brutality. It’s not always intended that way; at one point, Rudd’s Pete notes cheerfully, “It would be so great to not see you for a chunk of time so I could really just miss you. Remember when we used to miss each other?” It’s not that he doesn’t love her; it’s that he’s so itchy within his routine, with the rest of the days laid out in front of him, that he even finds himself wondering about his life as a widower. (A commiserating friend agrees, while insisting, “It’s gotta be peaceful — this is the mother of your children.”)

The fear that feeds Pete’s ill-advised comments and daydreams isn’t as peculiar as we’d like to think. At 45, Apatow is a the upper end of Generation X, an eternally restless and self-doubting swath of the population, often scarred (and at the very least shaped) by the high divorce rates of our baby boomer parents. Yet here we are, marrying and procreating and remodeling and having exactly the kind of lives they taught us to abhor. We were supposed to be cool, jaded and ironic, but you can’t be ironic when you’re going to lose your house and your wife is pregnant again.

As an artist, Apatow has a choice: to either ignore these matters or to tackle them. He does the latter — and not in the cutesy, bullshit manner of a more traditional movie comedy like "Life as We Know It" or "The Change-Up." One of "This Is 40’s” funniest scenes, a centerpiece of its trailer, finds Pete pleading with Debbie to help him determine the source of his rectal pain. Is it a fissure? A hemorrhoid? She looks at her husband, legs akimbo, a mirror carefully positioned below his crotch, and asks in a calm and measured tone: “Can we just keep, like, a small shred of mystery in our relationship, please?” He refuses, and in his own way, so does Judd Apatow. "This Is 40” is a film about that demystification, and Apatow and Mann start with themselves. They don’t worry about perceptions, or commerciality. They put their lives on film, with only the flimsiest of filters, and while all those who see it may not understand the specific Southern California struggles of this yuppie couple, they will see and hear things in their conflict that ring indisputably true.

Earlier this year, Mike Birbiglia explained that impulse to me. It's one that manifests itself in his film "Sleepwalk with Me," on Louis C.K.'s "Louie" and Lena Dunham’s "Girls" (Apatow produces the latter), on Marc Maron's and Dan Harmon’s podcasts, in the divorce episodes of "Curb Your Enthusiasm" and in that remarkable Tig Notaro set in August when she revealed she had cancer. Birbiglia explained:

I’d like to think that we’re part of a comedy movement right now that’s moving away from observational comedy and into something that’s more personal and real. But it’s just one person’s opinion — it’s what I prefer because I feel like it has more heart to it. It’s got more teeth. And I feel like in some ways it’s a response to the Seinfeldian era of comedy, which was observational to a point of brilliance. I mean, Seinfeld did it so well, and there were so many mimeographs of that style, and then at a certain point, those mimeographs became so boring … It’s actually more difficult to just tell your story, and tell it honestly, and admit that you’re wrong about things in a way that’s entertaining. Because chances are, the first two drafts of that aren’t entertaining.

Some of "This Is 40’s” critics say it’s one of those “first two drafts,” and while many of their complaints are valid, they somehow seem insignificant in the face of what Apatow has accomplished, to the achievement of taking that intensely self-critical instinct into the realm of a studio Christmas comedy and seeing how it flies. He puts it all out there, and lets us sort it out — and some audiences are not up to the task (or will simply echo Iris’s dialogue: “I’m sick of everybody fighting”). It’s not just another iteration of the so-called “comedy of awkwardness,” which is dead and buried (and if you don’t believe me, watch the eulogy that is "The Comedy." Better yet, don’t). It is comedy as autobiography, and it’s far more beholden to the second half of the phrase. Apatow is taking big chances here — in the execution, in the autobiography and in the payoff, which comes almost as a throwaway, when Pete asks Debbie for help out of his bed, joking, “Will you carry me?” and then adding, as an afterthought, “You’ve been carrying me all this time.”

There’s something indelible about that moment that "This Is 40” captures -- something real and honest about the complexity of an adult relationship that goes beyond the broad sitcom frames of the “can’t live with them, can’t live without them” variety to the genuine coexistence of true love and total frustration and of adoring someone who, quite frequently, makes you insane. It’s a lot to take in and more than we’re used to in a movie like this. Early on, Debbie keeps countering Pete’s sad rock ballads with the pounding dance music that she and the girls like. “This what makes people happy!” she says, and when he plays his sad bastard music, she keeps pressing: “This doesn’t make people happy!” she insists. “You’re the only one in the room that’s happy!” We defenders of "This Is 40” may find ourselves in similar conversations with its detractors; in many ways, this is not a movie that “makes people happy,” and making people happy is what comedy is supposed to do. Isn’t it?