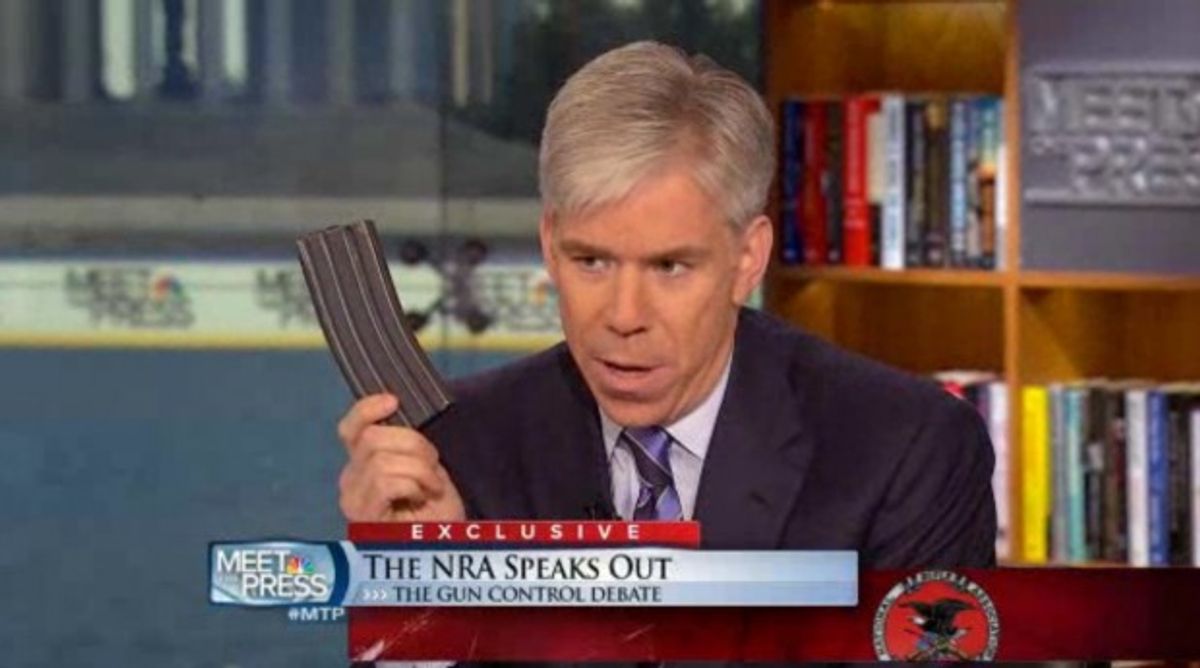 “Meet the Press" host David Gregory is in hot water after brandishing a 30-round magazine for an assault rifle on national TV last Sunday while interviewing NRA head Wayne LaPierre, apparently unaware that the District of Columbia, where he filmed the segment, bans such equipment. Other journalists have scoffed at the controversy, and even the NRA has dismissed it as “silly,” but D.C. police are apparently taking the matter seriously, saying they are investigating the incident.

“I really think what David Gregory did while he was inadvertently flouting the law was illustrating in a very graphic, perhaps not intentionally, but in a graphic way just how silly some of these laws are,” NRA President David Keene said yesterday. We don’t often say this, but the NRA is absolutely right.

The Gregory case incident highlights the problem with the country’s gun laws, a patchwork of state, local and federal regulations that make it almost impossible for jurisdictions that want to enact stricter regulations to do so with any kind of effectiveness.

Gun advocates often point to crime rates in Chicago, Washington and New York City -- which have some of the country’s most robust gun control laws -- as evidence that gun restrictions don’t work to deter crime. But the problem is that, in the absence of a robust national law like the Assault Weapons Ban, it's incredibly easy for someone to simply go to the next jurisdiction over to buy a gun or ammunition that is banned in their hometown.

While it would have been impossible for Gregory and his staff to purchase the magazine he used in the District of Columbia, they could have easily visited one of the many stores ringing the city in its Virginia or Maryland suburbs, all within just a few miles of their studio. Or you can simply order high-capacity magazines like the one Gregory used on eBay or off a dozen other websites.

“Don't wave Chicago because where are Chicago's guns coming from? We trace the weapons that come into my city. They're not coming from [Chicago],” Newark Mayor Cory Booker said on ABC’s "This Week" on Sunday after Wall Street Journal columnist Peggy Noonan raised this exact point. “They're coming from places that have free secondary markets where criminals and gun runners can easily buy weapons and pump them into a community like mine, where it is easy for a person who is a criminal to get their hand on a gun.”

And as Gregory’s predicament demonstrates, the laws are so weak that you don’t even have to be some kind of master criminal bent on breaking the law to do so. The problem is that it’s so easy to flout them, as Gregory and his team at "Meet the Press" may have done. He was just unfortunate enough to display it on national TV, something most people will never do with their illegal guns.