Fiscal cliff: Republicans have no principles

There's no deal because the GOP's confused: They're against voting to raise taxes, even if that raises taxes more 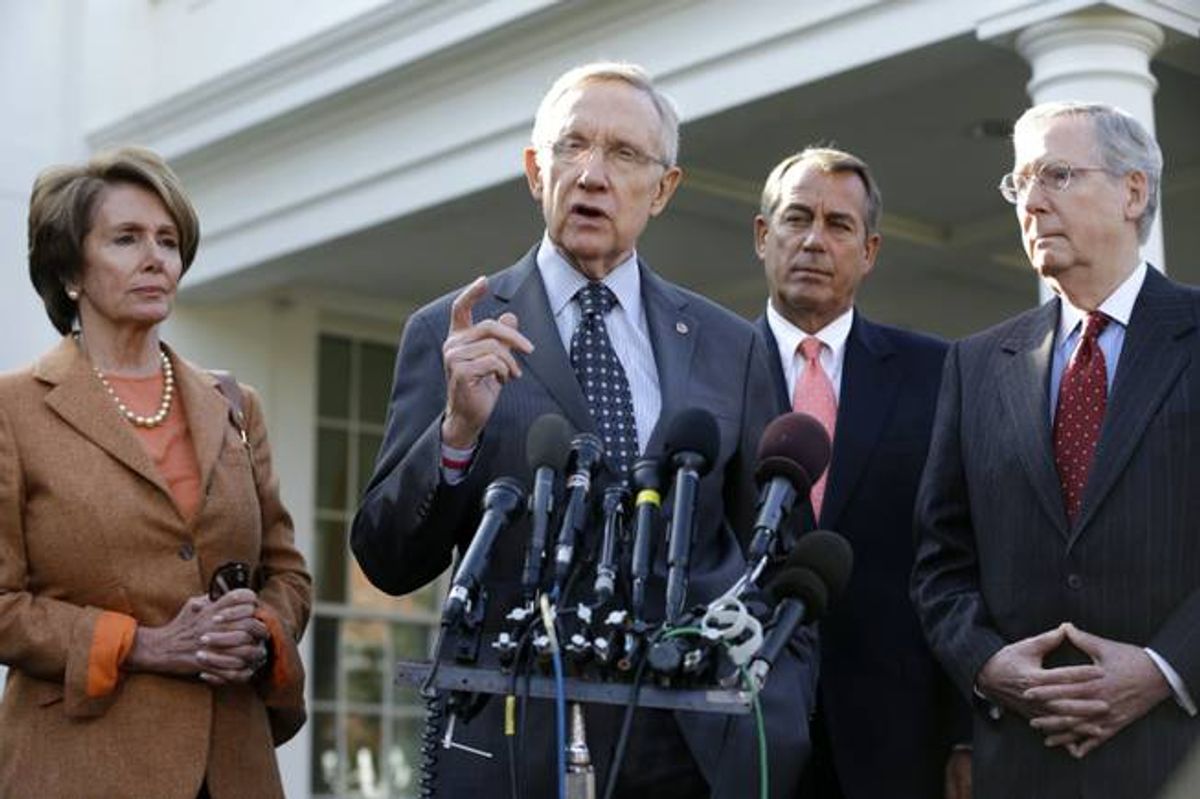 What’s truly amazing about the issues involved in the fiscal cliff is, at the end of the day, just how easy a compromise should be.

This isn’t a decision about war and peace, or abortion, or gay and lesbian rights – issues on which compromise is exceedingly hard to find because of the nature of the issue. A nation can’t be halfway at war; abortion either is or isn’t murder. Budget disputes – overall spending totals, and especially tax questions – are by nature just not like that. A few billion more for the Pentagon or a few billion less? That’s exactly the kind of question normally solved by striking a deal.

Now, granted, even in cases where the two sides eventually compromise, it might not seem as if they will, even right up to the last minute. And it’s always more difficult than just picking a number halfway between what both sides want. After all, bargaining power may not be equal; right now, Democrats control both the White House and one chamber of Congress, so they might be able to get a bit closer to their ideal point than will the Republicans, who have only the House. Meanwhile, both sides may inflate their original bids; it takes quite a bit of bargaining to get to where negotiators’ true positions are revealed, thus allowing for the difference to be split (or for the side better at bluffing to do a bit better than it should).

But, yes, if it’s just money, it should be very possible to split the difference.

So why is this one so hard? Because Republicans aren’t treating it as a difference over dollars; they’re treating it as if a principle is at stake, even if they seem to be struggling to find the principle:

1.) Is it about never raising taxes, no matter what? Even putting aside what a silly principle this would be, it’s clearly not what they’re fighting for since they don’t seem to care at all about the tax increase involved in the expiration of the payroll tax cut, not to mention that their failure to compromise on the Bush-era tax rates will produce an even larger tax increase. So the principle appears to be not about what happens to taxes, but about never voting to raise taxes, even if that means taxes go up more. A strange principle indeed.

2.) Or perhaps the principle is on the spending side. Some Republicans appear to believe that they were elected to return government to the size it was before the New Deal, and that anything else is an unconstitutional and probably ungodly perversion of the Republic. Granted, that principle doesn’t (for almost all of them) seem to extend to the size of the military or restrictions on the government’s ability to do who-knows-what in the name of fighting terrorism, not to mention intrusions into bedrooms. But putting that aside, it’s a way of elevating relatively small differences into a matter of first principles – just not one that Republicans have any chance of winning.

3.) Or perhaps it just comes down, for many Tea Partiers, to a principled opposition to compromise at all.

If it’s the first of these, then a deal may be surprisingly easy – as soon we go over the cliff and they can vote for “tax cuts” instead of “raising taxes,” even if the end result is identical or even results in higher taxes.

If it’s the second one, then it’s just a case of convincing the holdouts (at least if there are enough to torpedo any deal) that, yes, Mitt Romney lost the election and the New Deal isn’t going to be repealed for at least the next four years.

If it’s the third … well, those who believe in that “principle” just have to be left behind, and the remainder of the Republican conference needs to accept that there’s nothing that can be done about it.

What the second and third stories depend on, however, is if there’s some competing incentive for most mainstream Republicans to abandon that “principle” -- whether it’s concern for the economy, or concern for the image of the party, or something else. If not, and if one of these is the big principle they settle on, then we could be in for a long ride.

Either way, the idea that any of these are really “principles” is pretty much a joke. The reality is exactly what it always is in these cases, which is that the two sides will eventually settle on a number between their positions and that the real negotiations have to do with pushing that number a little bit one way or the other. All the GOP's dysfunction does is to push the point when we will get to a solution back in time, and perhaps affect the final numbers. Still, even if it’s not damaging in this case – and it still might be – it’s a terrible way for the nation to be governed.