"The Tinkerers": How corporations kill creativity 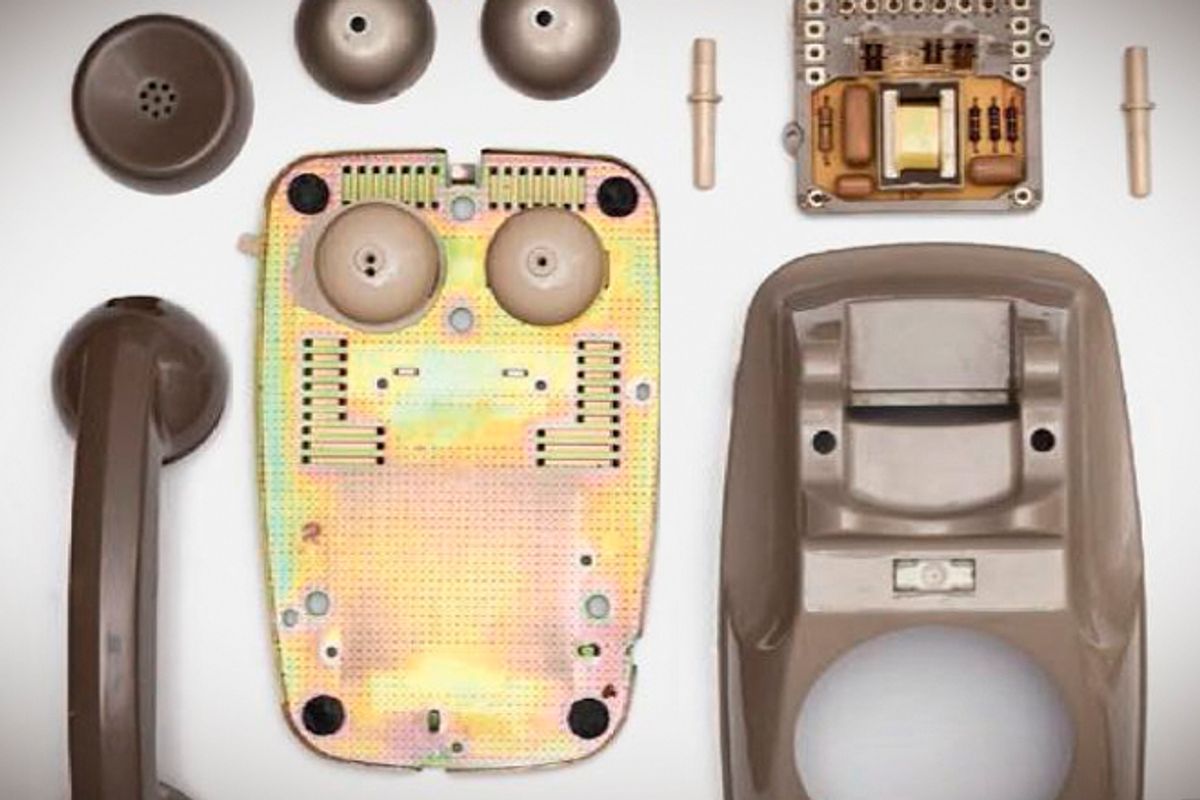 Excerpted with permission from "The Tinkerers: The Amateurs, DIYers, and Inventors Who Make America Great"

A few years ago I engaged my then two-month-old smartphone, a BlackBerry of some sort or another, in a very nontechnical road test: I sat on it. I only noticed the damage when one afternoon I reached to check my email. The small screen, usually jittering and scrolling with plenty of new messages, was suddenly a disconcerting Technicolor swirl with a huge black spot in the middle.

I drove in a mild panic to the nearest Verizon Wireless store and met with a sales representative. After asking for my vitals, he typed for a few seconds and waited. Then he typed, then he waited. Then he sighed.

Could I get my current BlackBerry fixed? The rep shook his head sadly. “They don’t let us repair the phones in the store anymore,” he said.

I felt his pain. Having grown up tinkering with Radio Shack electronic kits, I used to love taking things apart—radios, tape players, anything I could get my hands on.

But in the last twenty-five years or so, the number of household devices we can easily tinker with has dwindled.

I Googled my model number to see if I could find a more affordable replacement. What I stumbled onto instead was a short video on YouTube. The video showed a pair of hands disassembling a BlackBerry and replacing the screen in a matter of minutes.

Through another Google search, I found an online retailer selling replacement screens for around $45, as well as a small smartphone-specific toolkit, including a tiny torque screwdriver and a little plastic tool for prying apart the BlackBerry’s flimsy case. One FedEx delivery later, I had my phone disassembled and its parts neatly laid out on my desk.

Just ten minutes after starting the process, I powered it up. Good as new.

My tinkering journey ended at the point when I had a working phone again. But it certainly didn’t have to. Having discovered through my own persistence that this modern-age bit of machinery wasn’t quite as complicated as I had first thought, I might have been emboldened to make my own alterations to it.

Perhaps the best example of the smartphone-tinkering phenomenon is the remarkable case of George Hotz. Hotz came to fame in 2007 as a seventeen-year-old hacker of Apple’s iPhone.

Hotz, a T-Mobile subscriber, wanted to use the iPhone with his existing phone plan. But at the time, Apple had an exclusive deal with AT&T. Armed with nothing more than an eyeglass screwdriver, a guitar pick, and a soldering gun, he was able to erase his iPhone’s baseband processor, the computer chip that determined which phone carriers the device would operate with. On his own PC, he wrote a new string of code for his iPhone, allowing it to operate with any wireless network. Hotz staked his claim as the first person to unlock an iPhone. This accomplishment quickly brought him both fame and notoriety.

Where do we draw the line between tinkerers and hackers? What role does tinkering play in contemporary society? How did tinkerers traditionally influence American industry and society? Do we still have what it takes as a nation of tinkerers to excel in the global economy?

I believe the answers to these questions lie somewhere in the tension between corporate discipline and individual ingenuity.

The clerk’s sadness at not being able to fix things anymore, and my own sense of accomplishment at having avoided the “throw out and replace” syndrome, I think, were both symptomatic of something afoot in our culture: a return to an important tradition that has been to some extent a casualty of the remarkable efficiency with which we produce all manner of stuff. For many generations in the postindustrial age, puttering around with the mechanical devices that surrounded us was practically a rite of passage, and for many, a way of life. It tethered us to our machines and reaffirmed our notions of modern civilization. Deeply probing how things worked also provided children and adults alike with endless hours of enjoyment. It saved enterprising souls hundreds if not thousands of dollars on repair bills. It also often resulted in new and startling discoveries that sometimes led to fresh innovations.

The first gadget Steve Jobs cobbled together while still in high school with his geeky older college buddy Steve Wozniak was a “blue box” that enabled free long-distance phone calls by duplicating the appropriate digital tones. Sure, the blue box was illegal, but that didn’t stop the mismatched pair of “phone phreaks” from selling a bunch of the units to college students and other intrepid pranksters. The blue box grew out of a simple love for playing around with gadgets and making them bend to the will of a few individuals.

Jobs and Woz, who later cofounded Apple Computers, weren’t preparing for a career in hacking phone service. Rather they were engaging in the time-tested American tradition of tinkering with what was around them, and through doing so, exploring their potential for future innovation.

The word “tinkerer” had, until recently, a slightly negative connotation, suggesting individuals who are somehow aimless, lacking focus, or not sufficiently motivated to create something genuinely new. To many, “tinkering” sounds like a quaint pastime reserved for those who are retired or otherwise disengaged from the everyday process of mainstream productivity. That’s if they think of tinkerers at all. The term itself has fallen out of use, at least in the traditional sense. But historically, American tinkerers were a relatively eclectic bunch who hatched extraordinary, life-changing innovations by sheer will and forward momentum. Benjamin Franklin, Eli Whitney, Cyrus McCormick, Samuel Morse, Charles Goodyear, Thomas Edison, the Wright Brothers.

Then life got more complicated. It’s often assumed that somewhere in the late 1800s, at the turn of the century, tinkerers went the way of the horse and buggy. But I would argue to the contrary: America’s tinkering tradition has always been a key part of its ongoing greatness.

So what do I mean by tinkering, in contemporary terms? At its most basic level, tinkering is making something genuinely new out of the things that already surround us. Secondly, tinkering is something that happens without an initial sense of purpose, or at least with a purpose quite different from the one originally identified. Tinkering also emanates from a place of passion or obsession. Lastly, tinkering is a disruptive act in which the tinkerer pivots from history and begins a new journey that results in innovation, invention, and illumination.

Increasingly, however, American tinkering is the unlikely byproduct of a country driven by greed and conformity. Within our success as a nation and a global economy lies a paradox. The United States, with its highly disciplined approach to capitalism, invented the modern corporation and the marvelous, sleek objects it produces. Indeed, our processes have become so rationalized and efficient that we can produce new things that are cheaper than the old ones they replace. But as those wondrous corporations become bigger and more efficient, they conspire to take control of many of the outlets of our tinkering, threatening to snuff out the very creativity and brilliance that fueled the growth of those corporations.

In August 2010, Paul Krugman published a piece in the New York Times titled “America Goes Dark.” He described how the United States, “a country that once amazed the world with its visionary investments in transportation, from the Erie Canal to the Interstate Highway System” was now dismantling its infrastructure.

Krugman’s main point was that the U.S. government was not investing stimulus funds in the tools needed for our own economic growth. Three decades of antigovernment rhetoric had convinced many Americans that spending taxpayer funds on anything was a waste of taxpayer funds. But government—the US government, specifically—had built this country into an innovative economic powerhouse by investing in “lighted streets, drivable roads and decent schooling for the public as a whole.”

I would take Krugman’s point one step further and argue that the American government and people helped the country grow both by investing in innovation and by committing themselves to the traditional tinkerer spirit. A sophisticated, cutting-edge infrastructure was the perfect crucible for the kind of innovation the United States embodied.

The point about the devolution of tinkering in American life is not that we have lost a physical connection to the work that we do. It’s that the notion that we can fix any problem or achieve any goal that we set for ourselves has deteriorated into a sanitized, corporatized version of what constitutes achievement.

Corporate America has grown rigid as it has grown larger. Despite the dot-com era’s many images of creative whizzes reweaving the very fabric of innovation, it remains extremely difficult for the freethinking alchemists of today to perform their peculiar strain of magic and thrive while doing it.

Modern-day American companies, especially large public companies, simply find it difficult to justify the inevitable overage of resources required to foster truly free-form tinkering. Even if they appreciate it, their investors rarely do.

Recent American history is full of examples of tinkerers who have innovated in worlds that exist only on the balance sheets of corporations or in the ether of the computer cloud. Indeed, these new-age tinkerers now outrank traditional tinkerers in both numbers and economic influence.

That is not as worrisome as some observers claim. The canard that “we don’t make anything anymore” has the ring of truth, since there is no denying that much manufacturing appears to have migrated to countries where the living wage is much lower than in the United States. But, in fact, more manufacturing still happens on American soil than in any other country on earth. United States manufacturers created around $1.7 trillion in goods in 2009, according to United Nations statistics, outproducing China by more than 40 percent. So why is there a perception that Americans are losing the manufacturing battle?

The answer is simple. The solution is complex. The simple reason for America’s continued dominance in manufacturing is that US companies have figured out how to manufacture stuff with fewer workers. Productivity due to innovation has swelled dramatically over the last thirty years. Since the middle of 1979, when manufacturing employment hit its zenith with 19.6 million workers, the US economy has shed around 8 million factory jobs. Meanwhile, American manufacturers have abandoned industries with low profit margins, such as shoes, consumer electronics, and toys, leaving emerging economies such as China and Indonesia to make many of those goods at a fraction of what they would cost here.

Tinkering is not a calling for everyone. But preserving the habitat of the tinkerer is one of the few time-proven ways we as a nation can get back on track. We can’t know the future in any way except to know that it will be different than today.

Tinkering is a state of mind as much as it is a mode of discovery. The motivations that Americans have had traditionally for creating solutions to the world’s problems are as varied as they are vivid. I suspect that what we’re really talking about is a crisis of national confidence rather than a systemic failure.

Excerpted with permission from "The Tinkerers: The Amateurs, DIYers, and Inventors Who Make America Great" by Alec Foege.  Available from Basic Books, a member of The Perseus Books Group.  Copyright © 2012.

Alec Foege, a writer in New York, is the author of The Empire God Built: Inside Pat Robertson's Media Machine.