The year everything went mobile

Smartphones and tablets stomped all over the old-school personal computer in 2012. Society won't ever be the same 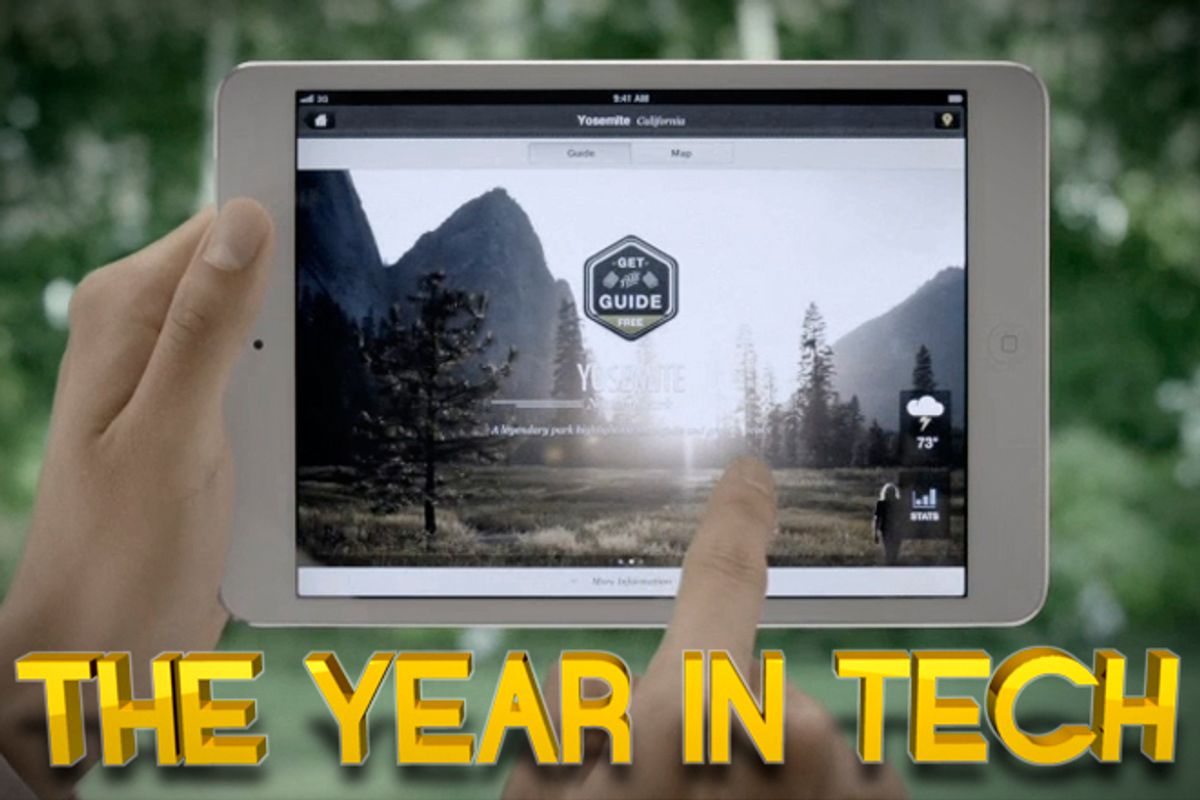 Packing for Christmas vacation, I contemplated my laptop, a MacBook Pro that weighs down my briefcase like a lead brick. Why bother? I wasn’t planning to work over the holidays, and my iPhone could easily handle all my routine Internet needs. It just didn't make sense to lug the old thing around. As the truth sank in, I felt liberated. For the first time this century, I would leave my laptop behind.

A simple story, maybe, but in that personal shift you can hear the echo of 2012's biggest technological transformation. Call it the year of the great untethering: In 2012 "mobile" triumphed. We've seen this paradigm shift rolling down the pike for a long time. Now it's here. The decline of the PC is no longer subject to debate.

And that's a big deal. The changing sales figures for desktops and laptops versus tablets and smartphones signify more than just an interesting tech business trend. This is a story about the reconfiguration of society around the small screen, a development that has implications for the media, entertainment, and advertising industries; for our privacy and our economy; for business and politics. If you're not figuring out how to play in what the tech industry likes to call the "smart connected device space" then you have already lost. And if you are not paying attention to what these devices will do to us as well as for us, then you are criminally negligent. Society is changing fast as we get more mobile. Can we keep up?

Here are just a few data points from 2012 that fit neatly into one big tapestry:

All those items point in the same direction -- our mobile devices are where everything intersects.

If you are in business, the ability to exploit the world's rush to mobile makes or breaks careers and decisively shapes the fortunes of even the mightiest corporations. Just ask Scott Forstall, a longtime Apple executive who was terminated for bungling the introduction of an Apple Maps app for the iPhone. Or Microsoft and Nokia, two companies that lost their position at the top of the tech heap largely because Apple beat both firms to the smartphone. Competition has never been so fierce in the consumer tech space as it is right this second. Product cycles turn over so quickly, and there are so many competitors in the marketplace, both for fully assembled devices and their component parts, that anyone's position at the top is increasingly tenuous. The triumph of mobile also signals a triumph of volatility.

If your livelihood depends on generating revenue from an advertising-supported business model, whether that be journalism or Internet search, you must figure out how to make your product work on mobile devices, or go the way of the dinosaur. This is particularly troubling for industries like the news business, which had yet to figure out a profitable business model for a world in which people were getting their info fix via desktop or laptop, and now suddenly has to make the shift to tablets and phones.

(The news isn't all bad -- some data suggests that smartphone owners consume news more voraciously than desktop troglodytes — simply because they can — which should provide beleaguered publishers with greater opportunities to "monetize" their content. But banner ads didn't work very well on the old Web — and there is even less real estate to work with on the mobile Web.)

If you are a person who cares about privacy, you've never voluntarily made yourself more open to the outside world than when you put a smartphone in your pocket. Your phone, increasingly, knows where you are, what you are buying, what you are reading, watching and listening to, and, of course, who you are communicating with. Devices that are with us from the moment that their alarm clocks wake us up to the moment we set those alarms before we go to sleep know more about us than we might even consciously know ourselves. Sadly, progress in crafting up-to-date privacy laws is woefully far behind the state of technological innovation.

It's troubling, this open door to corporate and government surveillance that so many of us are racing through. But in the wake of all that technological innovation and volatility are also signs of fascinating social change made possible by the triumph of mobile. The maturation of social media merged with mobile devices makes things happen. You might be stuck at the airport, or waiting for the bus, or sitting on the toilet, and you check Facebook on your phone and learn that Komen for the Cure has just dumped Planned Parenthood or a horrific massacre has shocked a small Connecticut town. You check Twitter and there is a link to donate to Planned Parenthood or the Brady Campaign. A few clicks later, and you've donated some cash, signed some petitions, sent an email to your congressional representative, and spread the news. And if we have learned one thing this year, it's that if enough people make enough noise and raise enough cash in a short period of time, politicians and corporations notice and react. Just as entrenched business titans are stumbling as their foundations wash away before the onslaught of the mobile revolution, so too will entrenched politics shudder and wobble.

The smartphone is an accelerant. When we carry computers in our pockets that link us together, we carry with us the possibility for crowdsourced action as easy as our thumbs can manipulate a touch screen. We may look back at 2012 as the year when we just started figuring out how to actually use these things.

So yeah, I might be leaving my laptop behind when I head out for my break this year, but I'm still taking the whole world with me, wherever I go.