All my wasted New Year's 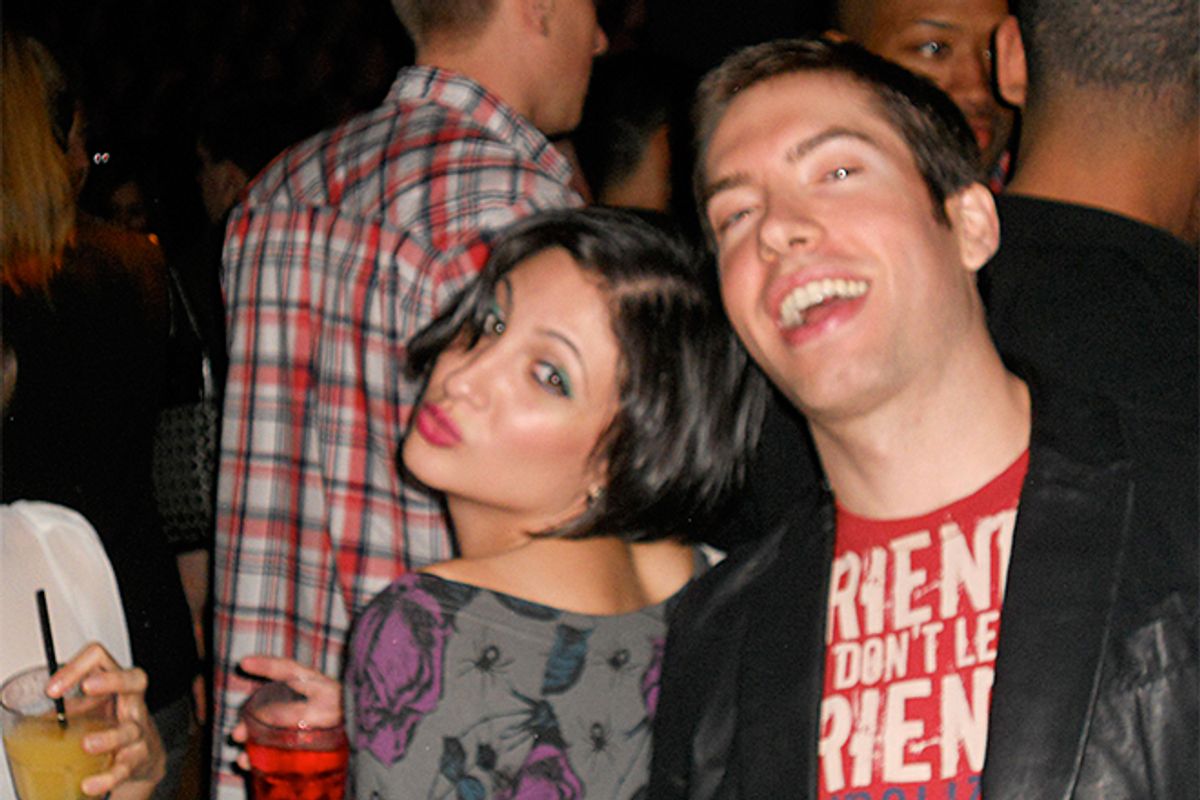 A photo of the author in the clubs.
--

Like every other party girl, I was always in search of the perfect New Year's Eve. Four years ago, I rang it in at a club on the Lower East Side with my then-boyfriend. Champagne rained down on our heads at midnight as we stood on a dance floor spilling over with people and vodka. I had always been searching for this feeling of belonging, this euphoria, and I had reached that beautiful point where I was slightly tipsy but not yet drunk, and I vowed to stay there this time.

Somehow, though, I managed to talk him into hitting up one more bar before we headed back to my parents’ place. And somehow, I managed to down another drink, then another, despite his hand reaching out to stop me. I remember flashes of dancing, and then stumbling home, and screaming something about the “golden-haired prince,” a waiter I just knew was flirting with me.

When I got home, I ran to the bathroom to throw up, and then came back as if nothing had happened. I did this multiple times before passing out, mascara smeared all over my face, one heel on and the other off. I was still wearing my glittery dress.

When people think of alcoholics, they don’t think about 22-year-olds dancing at a club. They think of a middle-aged man swilling vodka from the bottle and throwing furniture across the room, an older woman sneaking nips at her desk, or someone downing 15 drinks at the office Christmas party and passing out on the copier. Our culture has decided that 20-something binge drinking is normal. But it wasn’t normal for me.

My problems began at 17, when I went shot for shot with a pretty big dude, not realizing that tequila is very different from Smirnoff Ice. I stumbled back to my parents’ house on the subway alone and vaguely remember falling in the street before clamoring through my bedroom door with my pants around my ankles, thinking I'd try to get changed. I kept sticking my finger down my throat, making myself throw up to try and stop the nausea and dizziness, as my parents helplessly watched, not knowing what to do. (Is there anything to do?) The next day the sickness was like a fire that spread across my body. I vowed never to drink again, but it didn’t stop me for long.

Alcohol was clearly a staple at every dinner, every party, every girl’s night out, and overdoing it every now and then was practically a rite of passage for a teenage girl. However, by the time I reached college, I'd hit red-alarm territory. I was still reeling from the PTSD of an earlier trauma, and the alcohol drowned out the anxious voices in my head and made me feel calm, confident, more connected to people. I wasn’t partying in the dorms, though. I was hitting the hottest clubs in West Chelsea three nights a week with three of my well-connected friends.

Of course, those girls weren’t really my friends, but I wanted them to be. We always walked right through the velvet ropes and were led to a table in the center of the club, where I began drinking so I could lose all inhibition and hit the dance floor. The alcohol silenced the fear of their judgment, the envy I had of other people, the anxiety I carried inside me at all times. I had always dreamed of rolling with the “in crowd” and there we were, dancing among celebrities and the Manhattan elite. Strawberries and pink lemonade and chocolate were brought with every bottle. (Whoever was paying usually dropped about five grand.) I was living the dream.

But I’ve never felt so empty inside. I usually went home with someone I didn't know and woke up slapping my forehead: Oh God, not again. But the fabulous life can be a vicious cycle. Eventually I’d wind up back in the clubs, gussied up for male attention and swaying on the dance floor in search of approval. If I went to the clubs and didn’t hook up with anyone, I felt like such a failure. So worthless, all wrong.

Throughout all four years of college, I managed to hold it together at school. I got a job as a contributing reporter, worked at an internship, and maintained a GPA of 3.8. On the outside, I seemed to be doing fine. But behind closed doors, I was becoming a mess.

I didn't want to admit I was unhappy, but I can see now that I clearly was. I drank through a relationship that felt wrong, and then another one, terrified to be alone. Alcohol became the way I propelled myself forward, creating a life that looked good on paper and on Facebook. I figured I was drinking like everyone else. Isn’t excess what your 20s are all about? I didn't get drunk every day, or even every weekend, and I could go weeks at a time without picking up a bottle, so I convinced myself that I couldn't be an alcoholic.

I also convinced myself that I was young and carefree, scurrying from bar to lounge to club to party to dinner, sipping here and there and everywhere. But I realized there was nothing “carefree” about my drinking when I began blacking out. I punched my boyfriend. I lost my cell phone in a drunken stupor. Hoping to control myself, I switched from wine to vodka to beer. I cut out alcohol for weeks, even months. All the old tricks. But I always went back. How could this keep happening? I kept asking myself. I was a smart, responsible person, a good girl who always did what I set my mind to. What the hell was going on? It felt like someone had a high-heeled voodoo doll and a vendetta against me.

On Thanksgiving Day, I landed at New York Downtown Hospital for alcohol poisoning, my fourth time since I started college.

“She’s the ninth one today,” the nurse whispered to the doctor when he arrived, shooting my parents a disapproving look. It was no coincidence that three college dormitories were within a four-block radius of the hospital. I am never drinking again, I resolved. And I meant it. But I failed, and failed again.

The realization that I was an alcoholic dawned on me slowly, and frankly it made me sick. I couldn’t imagine a life without bubbly Sunday brunches and Patron-fueled parties. I couldn't make it through a holiday season without red wine and hot toddies, without eggnog and spiked apple cider. For that matter, I couldn't make it through a summer without mojitos on an outdoor patio.

But I began to see I had no choice. No matter how much I drank, the discontent, the restlessness, never went away. The desire for alcohol was like a child’s fever for toys: more, more, more. I made promises I failed to keep. I worried my parents sick. The day I hit bottom, nothing dramatic happened. No lives were ruined. No one got hurt. I was just tired. I couldn’t fight anymore. I needed to figure out how to go through life without picking up a drink.

When I finally reached out for support in November 2011, I thought my social life was over. No more parties, no more laughter. But I was shocked to discover how many young girls were in the same boat as me. These were young and stylish women pursuing amazing careers and attending prestigious universities.

At my first meeting, I met Sophie. She and her friends invited me to a party, and once I got there, it felt like middle school all over again. I stood in a doorway clutching a red plastic cup of seltzer, desperate for my old liquid courage. Somehow, I found it in myself to walk across the broken glass that led to a group of strangers, and the second I introduced myself was the moment that my life changed forever. That slow, prickly walk through the fear was a revelation for me. I could be friendly without alcohol. I could even be kind of charming.

In those early months of sobriety, the clubs, lounges, bars and parties thrown by fellow drinking "friends" were replaced with meals at diners and afternoons at the movies and coffee shops. At first I missed my old life. It was so much more “exciting.” The nondrinking life was quieter, saner, but with the help of my new friends, I began making a transition to adulthood. I began creating a life that I actually loved instead of obsessively trying to create one I could present to the world for their approval. In the place of alcohol, I was faced with choices, decisions, opportunities and responsibilities.

Last year on New Year’s Eve, I headed home at 10 p.m. It was the same time that the glamazons in black dresses and stilettos were just heading out the door. They looked amazing, as if they owned the world. But I remembered what it was like to be one of those women, and I promised myself I'd never forget how miserable I was.

Tonight, however, I'm back out there, but booze-free this time. I’ll be hitting up a few parties in yet another glittery dress, darting around the city with my real friends, and feeling calm, confident, and connected as ever. Sure, I may catch a case of the jitters before walking through the door of a soiree, but I know it will pass. I’ve finally found what I was looking for: I can go anywhere and feel like I belong.

Helaina Hovitz graduated from the New School in 2011. She is an experienced journalist who has written for The New York Times, Chicago Tribune, and Teen Vogue, among other publications. She is currently writing her first book.