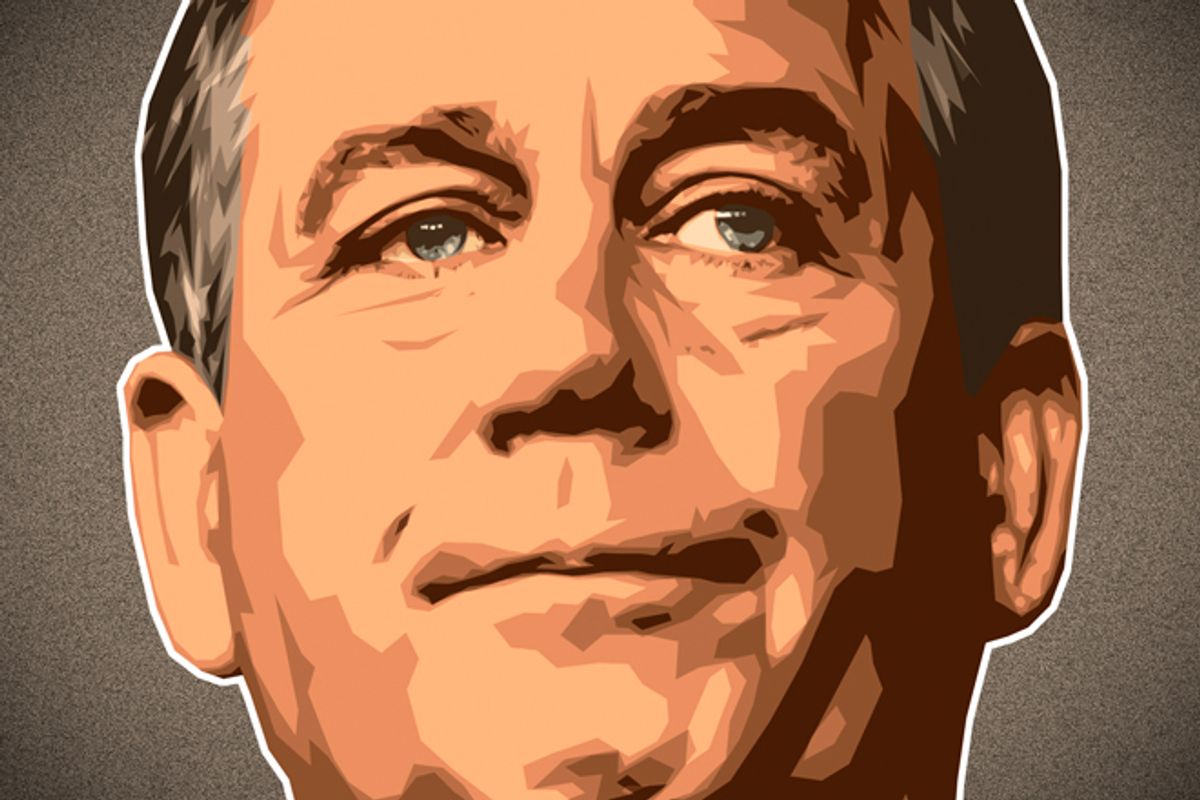 Despite boasting on both sides that Congress finally made a deal on the so-called fiscal cliff, people looking for details about the deal's ultimate outcome are going to have to wait until March. (A lot of important people had vacations ruined, so they have a stake in pretending something big got accomplished.)

There's no way to know how bad or good a deal Democrats cut until the conflict they postponed is resolved, and we know what it takes to lift the debt ceiling, keep the government running and deal with the "sequester" – the combination of automatic spending cuts to defense and to social programs baked into the original debt ceiling deal back in August 2011.

As someone who believed, and still believes, that it was best for the country if Democrats stood up to Republican hostage takers and went over the cliff, I have to admit President Obama and his chief negotiator Vice President Joe Biden got some good things with this deal. Unemployment benefits were extended for 2 million Americans and so were tax credits that help the working and middle class. The deal also kept student-loan interest rates low. Lots of Democrats are also celebrating the fact that Republicans voted for their first tax-rate increase in 20 years. But since the White House got far less in revenue than it originally asked for, we'll see how great a concession that turned out to be, since the deal kept tax rates low for millions of wealthy Americans, and ceded crucial hikes on estates and investment income for the super-rich.

One of the big drawbacks in going over the fiscal cliff, however, was the sharp cuts to spending, including Medicaid, food stamps, Pell Grants and other aid to low income and middle class Americans contained in the so-called sequester.  Going over the cliff also, some reasoned, sacrificed the president's best leverage in averting a new debt-ceiling standoff, since early on, it was assumed that any deal in which Democrats gave ground on tax hikes would include at least a one-year extension of the debt-ceiling. This deal didn't solve either of those problems, it merely postponed the wrangling until March.

Obama has promised he won't ever again negotiate on a debt-ceiling hike, which used to be routine until he at least participated in making it negotiable in 2011, hoping for a deficit-cutting, entitlement-stabilizing "grand-bargain." Will the president avert another showdown, as he promises? We don't know yet, but we have reason to worry.

Here, though, are four things the fiscal-cliff mess taught us with certainty.

Poor John Boehner. Whenever he wants to pass actual legislation, the kind that will also be passed by the Senate and signed into law by the president, he's got to rely on his predecessor, Nancy Pelosi. Once again, just as she did with the bill to keep the government running back in February 2011, Pelosi had to round up the Democratic votes to pass a bill that Boehner purported to want passed. (In the end, he voted for it, but his No. 2 and 3 guys, Eric Cantor and Kevin McCarthy, voted against it.) Pelosi kept 172 of 188 House Democrats on board; Boehner only got 85 of 240 House Republicans. Boehner further shamed himself by closing the session without a promised vote on Hurricane Sandy relief already passed by the Senate.

It's ironic that Boehner is going around boasting that he told Harry Reid "Go fuck yourself" after Reid said he was running a "dictatorship" last Friday. Reid was paying the speaker a compliment. Far from running a dictatorship, Boehner can't even deliver the votes of his top two lieutenants. He's unlikely to face any real challenge to his speakership when Congress reconvenes tomorrow, but he's speaker in name only. With a smaller majority he'll be even less able to make a significant move without Pelosi.

Neither side really cares about deficits.

Going over the fiscal cliff would have reduced the deficit by $1.2 trillion, though at great cost to the economy. Merely allowing the Bush tax cuts to expire would have reduced it by $1 trillion, admittedly with some pain to the middle class. In the end, the deal reached Jan. 1 cut the deficit by about $620 billion. I'm no deficit hawk, but the compromise on tax rates baked into the deal reduces tax-rate progressivity and ultimately makes it harder to fund government investments Democrats believe in, whether to reduce unemployment, improve education or expand social insurance. And meanwhile, the president continues to hype deficit reduction, inviting more ugly cuts later this year (see Lesson 4).

(Bonus lesson in here: Apparently nobody cares about consumer and investor "confidence," either, since it was supposedly the combination of the looming sequester plus debt-ceiling debacle that was depressing both, and this deal addresses neither.)

The country is run by and for the wealthy

The real scandal of the deal is that taxes went up more for people making $50,000 than those making $400,000, thanks to a combination of ending the payroll tax cut "holiday" and keeping the Bush tax cuts for those making between $250,000 and $400,000. The deal also continued the practice of protecting the wealth of the super-rich. Yes, the capital gains tax rate went up from 15 to 20 percent, but it was 28 percent before Clinton presided over its reduction during the 1997 tech boom, and didn't apply to dividends until the Bush tax cuts. Now dividends remain taxed at the lower, privileged rate as well.  The deal maintained the estate-tax exemption at $5 million, though it was set to revert to $1 million, while bumping up the rate from 35 to 40 percent.  Note that the deal did nothing to hike the "carried interest" rate that helped Mitt Romney pay a scandalously low tax rate.

All of this reflects the fact that nobody involved in D.C. policy debates makes $50,000 or less, and most probably dwell in that sweet spot protected by the deal, the $250,000 to $400,000 realm of the "not really rich," in the formulation of coastal Democrats as well as all Republicans. And not surprisingly, they're big winners in the deal.

(Bonus lesson: The White House was serious about not caring whether healthcare reform came with a public option: The deal cut $1.7 billion in funding for loans to help states set up nonprofit experiments in delivering healthcare, which was supposed to be a palatable public option alternative in state-established insurance "exchanges" designed to lower prices and foster competition.)

President Obama remains open to a "grand bargain" that cuts Medicare and Social Security in the guise of "stabilizing" them.

The president made two big media splashes in the final 48 hours of the fiscal-cliff showdown, one on NBC's "Meet the Press," and the other in his address to the country after the deal passed the House. He took pains to discuss his willingness to "reform" Social Security and Medicare in ways that Democrats should not. He boasted to David Gregory that he backed imposing the so-called chained CPI on Social Security cuts of living adjustments:

David, as you know, one of the proposals we made was something called Chain CPI, which sounds real technical but basically makes an adjustment in terms of how inflation is calculated on Social Security. Highly unpopular among Democrats. Not something supported by AARP. But in pursuit of strengthening Social Security for the long-term I'm willing to make those decisions.

And in his Tuesday night remarks, he went out of his way to declare that "the fact is the deficit is still too high," and named Medicare as "the biggest contributor to our deficit."

We may never know who in the administration was pushing the rumor that the president was open to hiking the Medicare eligibility age, as reported by Ezra Klein in early December, and whether it was just a ruse to scare progressives into backing a less hideous fiscal cliff compromise. I hope that's all it was. But the president himself put his own name on the Social Security chained CPI proposal on "Meet the Press" Sunday. (Will we see that clip in 2014 midterm ads, telling seniors Democrats are the party of Social Security cuts? I'd imagine so.) Clearly, the White House is still open to a legacy-defining "grand bargain," and Obama is willing to entertain ideas that are heresy to other Democrats, or that should be. Progressives are going to have to hang tougher than they did in the fiscal cliff negotiation to make sure it doesn't happen.

Obama also insisted Tuesday night that he will never again negotiate on a debt ceiling hike: "While I will negotiate over many things, I will not have another debate with this Congress over whether or not they should pay the bills that they've already racked up through the laws that they passed," he vowed. But understandably, Republicans don't believe him. Supposedly reasonable House GOP member Tom Cole told MSNBC after the final vote that by avoiding going over the fiscal cliff, "we’ve denied him I think his most important piece of leverage in any negotiation going forward ... Still sequester is in front of us. The continuing resolution runs out the end of March and obviously the debt ceiling. All of those things honestly are Republican leverage not Democratic so I think there will be opportunities to deal with the spending issue next year."