With politicians shamelessly mugging during the "fiscal cliff" crisis, D.C. really is Hollywood for ugly people 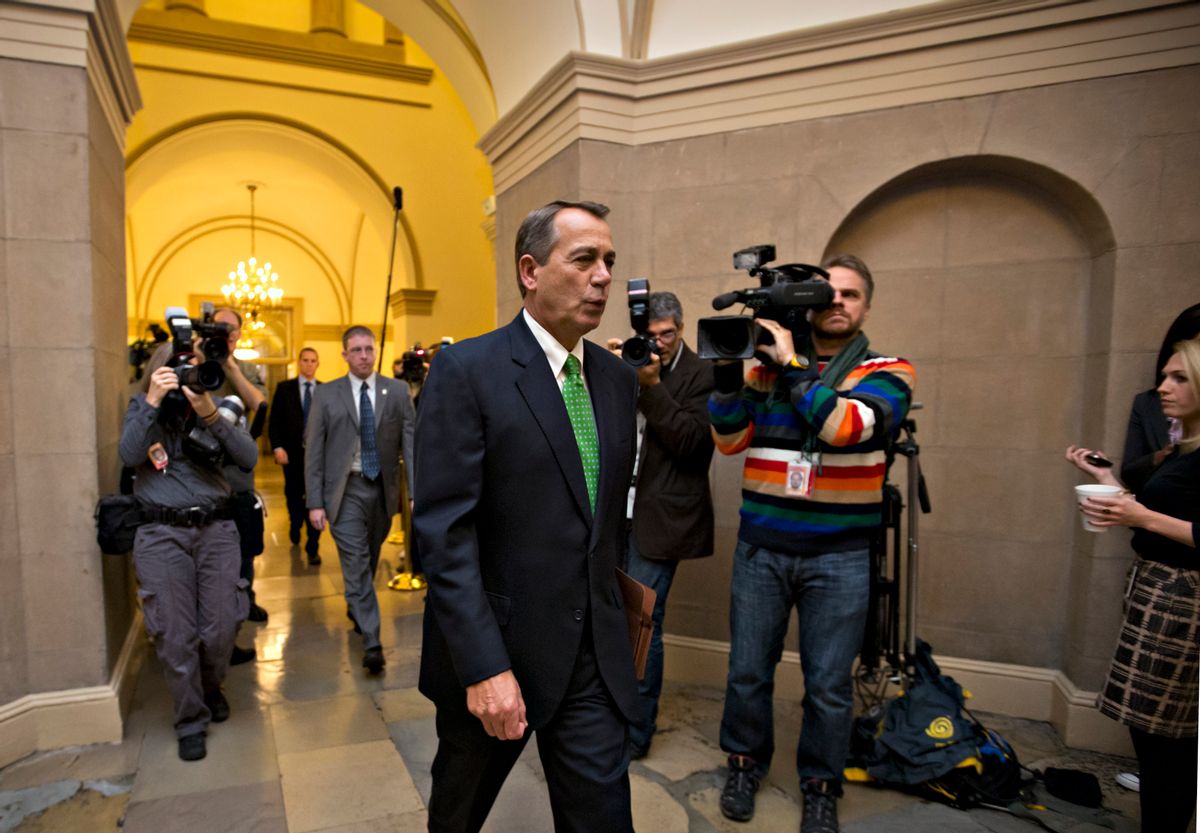 Politico's well-reported narrative of the fiscal cliff negotiations begins with an inevitable anecdote:

“Go f— yourself,” Boehner sniped as he pointed his finger at Reid, according to multiple sources present.

Reid, a bit startled, replied: “What are you talking about?”

The harsh exchange just a few steps from the Oval Office — which Boehner later bragged about to fellow Republicans ...

I love those blushing em dashes, as if the four-letter word itself would scandalize Politico's hard-bitten audience.

Years ago Vice President Dick Cheney expressed himself similarly, addressing Sen. Patrick Leahy, D.-Vt.). While the remark made it into the press, it's fair to take Cheney at his word. The veep later congratulated himself for his bravado.

Maybe it's just my rose-tinted memories of the Bush administration, but I see something different at work in Boehner's outburst. While the speaker may very well have been sincere, it's hard not to see the comment, which he repeated and boasted about, as an audition for real estate in Politico, maybe even the spot he got: the top of a long story that only the mavens' mavens will finish. Or maybe Boehner is trying out that three-word sentence as a new platform for the Republican Party. (Cheney's outburst came in 2004, before Politico existed.)

This is not to single out Politico for debasing the discourse — my colleague Alex Pareene does that far more skillfully than I ever could here and here — but the site is a part of the endless escalation of political coverage. With three cable networks devoted almost exclusively to politics, the players know that any flash of personality will be looped endlessly on cable. They have an incentive to act like reality TV stars.

When you're auditioning for a reality show, not everyone can try to be the hot one or the cool one but everyone can take a stab at being the crazy one. Boehner, with his orange tan and easy tears, is a perfect fit. So he curses at a colleague to get attention. By Washington standards, it's as crazy as throwing a fit in public or tampering with your partner's birth control.

Like reality producers, politicians stretch their dramas and characters far thinner than can be sustained. Every negotiation is a crisis that carries on far past anyone's patience and, like a soap opera, ends with a new cliffhanger or manufactured crisis "looming."

It's hard to see where this stops. There's a large group of smart, ambitious people professionally interested in covering politicians, no matter how little there is to cover. The irony is that despite the obsessive media, the level of interest in congressional maneuvering is largely illusory. John Boehner's official Twitter account has 422,000 followers. Lady Gaga has 32.7 million.