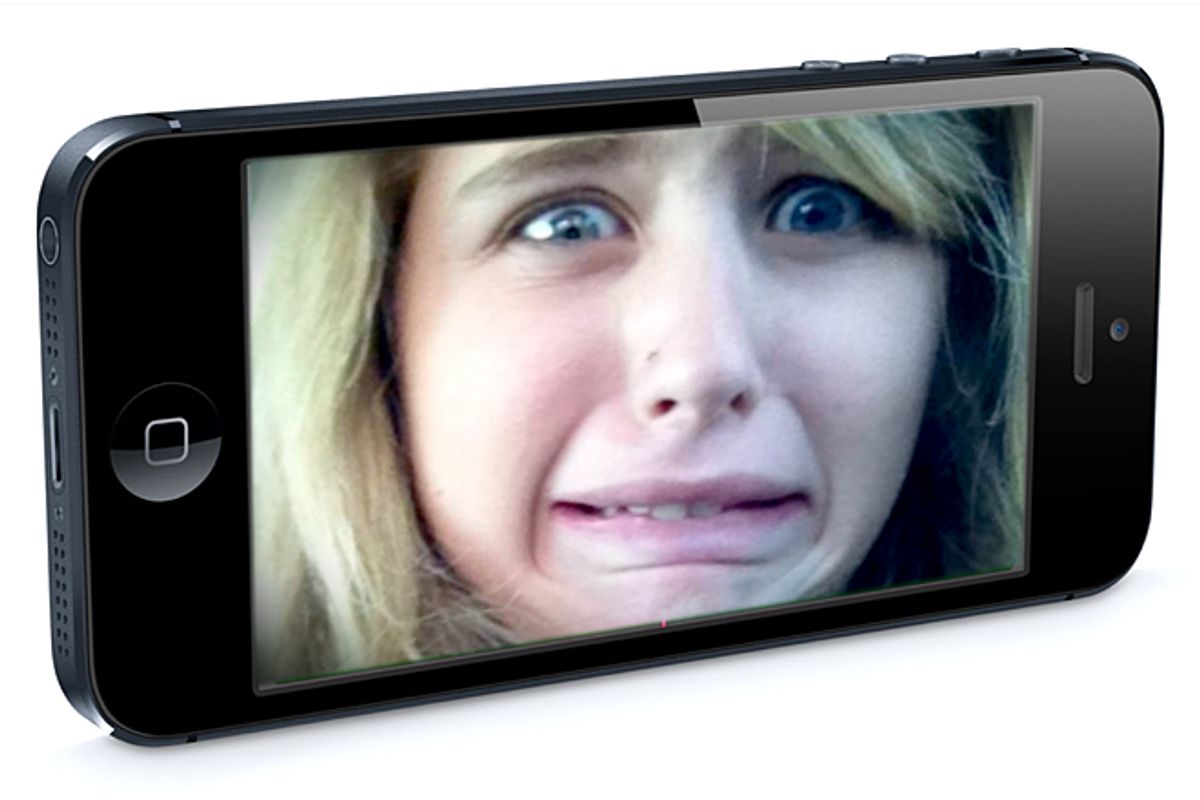 A Snapchat photo of Andrew Leonard's daughter, Tiana, was too good not to save forever.
--

Wait -- what? The video-and-pic sharing app Snapchat is suddenly, according to the Financial Times, "in the coveted but risky position of beginning 2013 as the most hyped app in Silicon Valley." How'd that happen?

Sneak attacks like Snapchat's -- the app was launched in September 2011, and exploded in popularity this past fall -- are most likely to happen when the target demographic is younger than the journalistic cohort that covers new technology. Smartphone-equipped high schoolers and college kids are the big Snapchat users, so the rest of us weren't paying much attention until the app blew up.

Or maybe you're just a jaded cynic like me, and responded to seeing the name Snapchat pop up with increasing frequency on Twitter by wondering why the heck the world needed yet another piece of software to help people share digital content. Haven't we shared enough, already?

Yes, probably. But the answer to why Snapchat is worth pondering is a couple of orders of magnitude more profound than I expected. Snapchat is the anti-Panopticon, an indigenous rebellion against the know-it-all, see-it-all, never-forget-anything networked world.

Sometimes, you just have to see these things in the wild before you understand. Over the holidays, my 18-year-old daughter, who received an iPhone for her birthday and then promptly absconded to college, walked out of a screening of "The Hobbit," checked her phone, and announced with pleased amazement that she had a dozen new "Snapchats."

"Explain this to me," I demanded.

It was simple. Snapchat's key feature is that the videos or pics that you share or send to your friends self-destruct after viewing. My daughter showed me her Snapchats: 90 percent of them were her college friends making fun of themselves with goofy pictures. The kind of photos that maybe they wouldn't want their legions of Facebook friends mocking.

Is there a business model to be made out of people sharing photographs of themselves sticking their tongues out? Thoughts like these can make one question the very premise of Silicon Valley capitalism. But underneath the goofiness, we're talking serious business.

In a world where your permanent record is captured in cyberspace for all eternity in ways our ancestors could never have foreseen, where a single Facebook post can sabotage your career, and every "like" helps advertisers target your every desire -- Snapchat says, go ahead, be silly, and don't worry about it coming back to haunt you. In an era in which everyone says they are concerned about privacy, Snapchat may just be the most successful of a new wave of apps that respond to consumers who want to escape the all-seeing eye.

Of course, it gets tricky. If you are quick and agile, you can capture a screenshot of your Snapchat photo before the self-destruct completes. There are also ways to store videos. According to Snapchat founder Evan Spiegel, such "reverse engineering" is counter to the spirit of Snapchat, but trying to stop it once and for all is likely to be futile. If you commit any part of your life to the digitally transmissible universe you have to accept the possibility that your digits will end up somewhere that you didn't intend them to be.

That will never change. But with Snapchat, maybe it's the thought that counts. The thought that spontaneity can be served, that sharing doesn't have to be forever, that we don't need to be tethered to Timelines or held accountable for every comment on every post we've made from the moment our infant hands started thumbing at our first touchscreen.