Catholic leaders in the U.S. and U.K. may keep on speaking out against gay marriage. But they can't fight progress 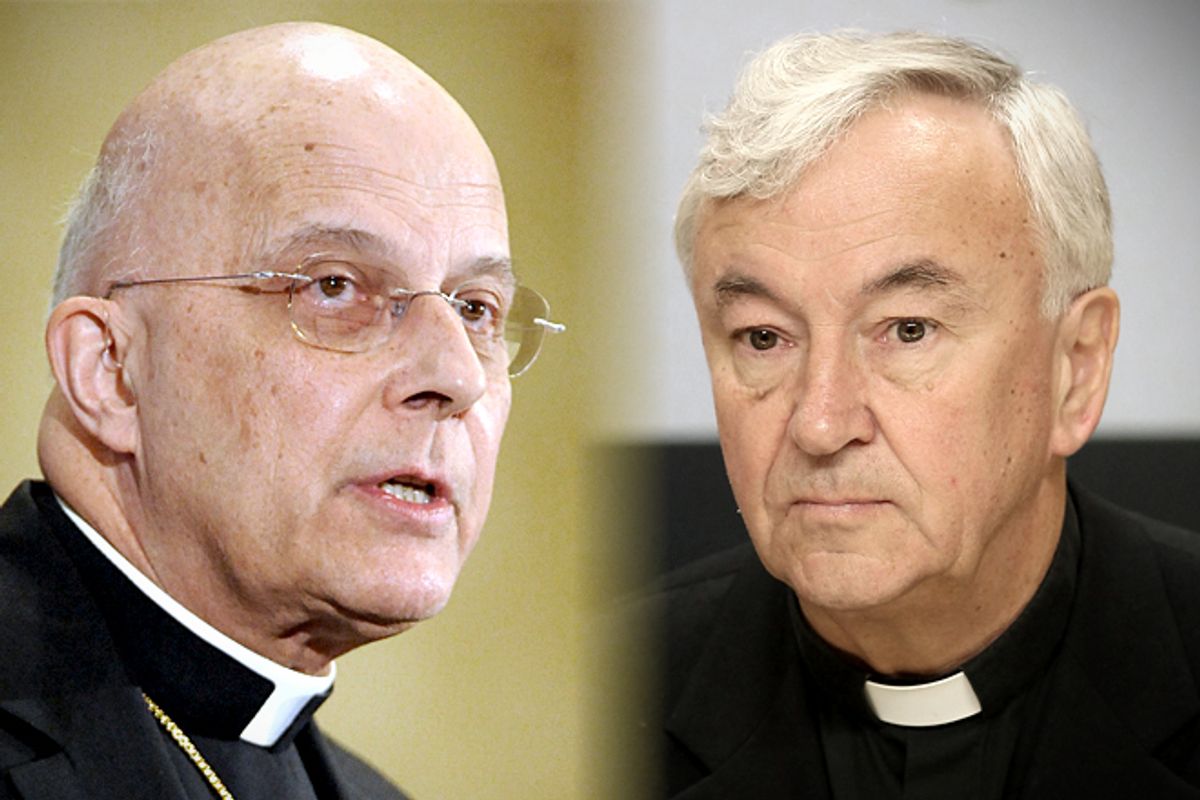 It's been a busy past few weeks for the Catholic Church and its muckety-mucks. There was the pope's holiday message insisting that gay marriage is a threat to world peace and an "attack" on the family. Then, Ireland's Cardinal Sean Brady used the death of a pregnant woman in a Galway hospital – and subsequent galvanizing outcry — as an excuse to urge his nation's Catholics to insist on the preservation of rights for the "innocent." And finally, in one last little outburst of vituperation before the year ran out, Italian priest Piero Corsi posted a rant on a bulletin board of his church, blaming women for "provoking the worst instincts, which then turn into violence and sexual abuse," adding, "The core of the problem is in the fact that women are more and more provocative, they yield to arrogance, they believe they can do everything themselves and they end up exacerbating tensions." But lest you think the men in black now intend to ease off on the crazy talk for the winter, it looks instead like they're just getting warmed up.

On Tuesday, Chicago's Cardinal Francis George and his six auxiliary bishops sent out a letter to parishioners urging them to oppose same-sex unions, insisting that they "create a legal fiction … the state has no power to create something that nature itself tells us is impossible."

You know, of all the reasons to oppose same-sex unions, surely right up there among the all-time dumbest is the inability of some people to get their heads around the viability of them. Issuing a pastoral statement that says, in effect, "La la la! This can't be so!" hardly makes for a compelling case. It treats matrimony as an organic entity rather than what it truly is — a human-made state, replete with ritual and contractual obligation. And it completely ignores that the Church's rule book, the Bible itself, has some seriously wonky notions of what constitutes marriage.

And though George's statement added that "the Church welcomes everyone … [and] has consistently condemned violence toward or hatred of homosexually oriented men and women," it goes on to insist that if same-sex unions become the norm, "We will all have to pretend to accept something that is contrary to the common sense of the human race. Those who continue to distinguish between genuine marital union and same-sex arrangements will be regarded in law as discriminatory, the equivalent of bigots." Way ahead of you there, your Excellency; we already think you're bigots.

But fear of gay people hogging up all the Crate & Barrel registries isn't just an American thing. Over in the U.K., Vincent Nichols, the Archbishop of Westminster and the leader of the Catholic Church in England and Wales, has this week ordered a London church to stop offering its special Masses for openly gay parishioners. In an interview last week, Nichols hinted at what was to come, saying of the U.K.'s movement toward marriage equality that "From a democratic point-of-view, it's a shambles. George Orwell would be proud of that maneuver, I think the process is shambolic."

The London parish's Soho Masses have been in existence for six years. Yet in a statement, Nichols declared that "people with same-sex attraction" could continue to receive pastoral care but said, "As I stated in March 2012 … 'many types of sexual activity, including same-sex sexual activity, are not consistent with the teaching of the Church'." It's an interesting distinction to make – I've been to many Masses in my life, but I've yet to see a single one that involved any form of sexual activity.

Nichols added, "The moral teaching of the church is that 'proper use of our sexual faculty is within a marriage, between a man and a woman, open to the procreation and nurturing of new human life.'" And that's got to be the most hilariously unself-aware thing a man who's taken a vow of chastity could possibly use as a defense of shutting out any group of individuals. And, by the way, call me when the Catholic Church refuses to marry a heterosexual couple because they're elderly, infertile or otherwise can't be "open to procreation."

It would be unrealistic to expect the Catholic Church to make a sudden about-face on the issue of equality. It's been doing the "Homosexuality is an offense to God" shtick a really long time and that's a hard habit to break. But the religion whose pope declared in 1866 that slavery wasn't necessarily against "natural" law does have a track record of sometimes evolving in light of compelling social change. We no longer think that owning human beings is a natural act -- even Catholics agree! And what we see of late, in the Church's sputtering gasps of outrage about the rights of pregnant women and LGBT couples, are the vestiges of a declining order. They're the outward expressions of old beliefs forged in ignorance and fear. They have nothing to do with "nature" and they have even less to do with anything that Jesus himself ever had to say. Their voices are loud, and they're hurtful. But in light of a growing movement toward tolerance, they're increasingly meaningless. You can preach against love all you want. Or you can get out in the world and practice it.