Sorry, East Coast Republicans, but this is your party too 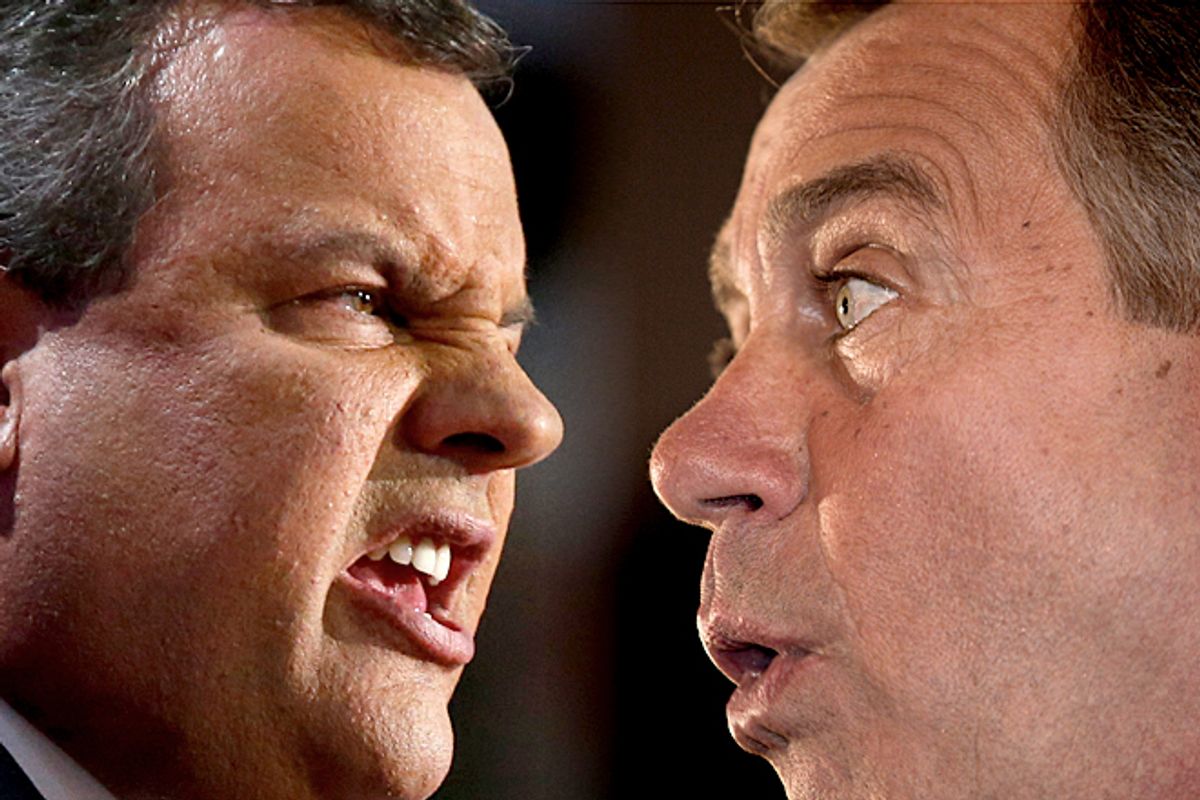 Spare me, Chris Christie. The New Jersey governor delighted political reporters with his theatrical excoriation of the Republican leadership in the U.S. House of Representatives after Speaker John Boehner refused to allow a bill funding aid for people affected by Hurricane Sandy to come to the floor for a vote this week.

This would be the same Christie who, in September 2012, headlined a fundraiser for Iowa congressman Steve King, who is not just one of the craziest members of the GOP crazy wing, but who also announced a month later that he probably wouldn't vote for relief money for Sandy victims for the same reason he refused to vote for federal aid for victims of Hurricane Katrina: Because he was pretty sure people spent the relief money on "Gucci bags and massage parlors." This is a man Christie wanted to win reelection, in order to help Republicans maintain control of the House of Representatives, so that they could continue ignoring the priorities and desperate needs of liberal, urban coastal states like New Jersey.

If people don't want John Boehner controlling -- or attempting to control -- an arm of the federal government, the answer is to not support Republicans at almost any level of government. It's that simple. The reason Boehner is speaker is because Republicans at the state level in various states controlled redistricting, and did such a good job of it that it would require that Democrats nationwide pull off a 7-point popular vote victory in the next midterm in order to win even a slim House majority.

Every Republican -- including New Yorkers Michael Grimm and Peter King -- who fundraises and campaigns for the Republican Party is responsible for what the Republican Party does with its power. While the "crazies" have nearly complete political control of the party, much of the money still comes from rich coastal "moderates," and Chris Christie is so important to the party as a symbol of moderation (shouty bullying moderation but moderation all the same) that the GOP gave him a prime-time speaking slot at the national convention. The Christies enable the crazies.

The reason a bunch of knuckle-dragging idiots and far-right radicals were able to kill the Violence Against Women Act is because there are effectively no consequences for doing things the moderates disapprove of and huge consequences for doing things the right wing doesn't approve of, and that is going to remain the state of affairs in the Republican Party until the supposed grown-ups stop supporting the Republican Party. Everyone who remains in the party is responsible for the worst abuses of the conservative movement, from voter suppression to fiscal nihilism to refusing to send money to people whose houses were destroyed months ago.