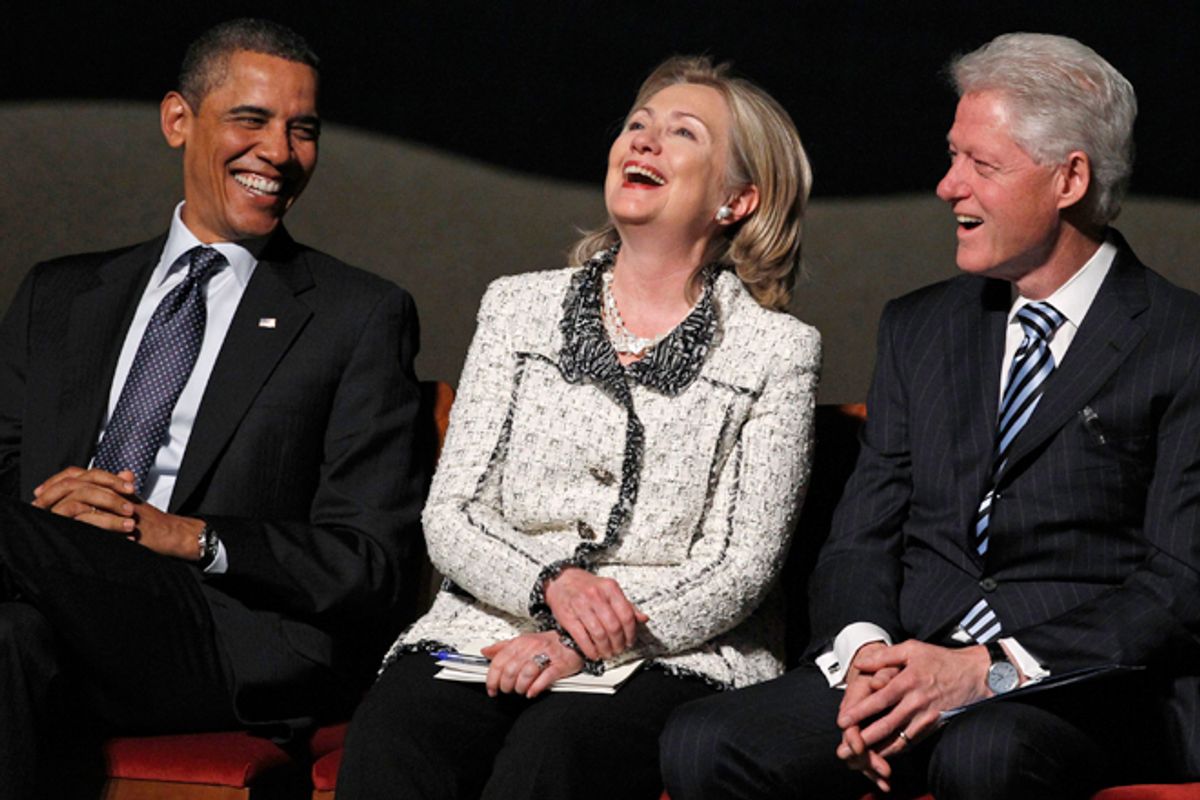 Right-wing claims that Hillary Clinton faked illness to avoid testifying about the Benghazi tragedy would be funny if they weren't so ugly. It's the wingnut trifecta, smearing our most popular past Democratic president, Bill Clinton, along with our current president, Barack Obama, and the current 2016 front-runner, all with one shot. Imagine birtherism crossed with the worst of the hateful anti-Clinton lies, like the "Vince Foster was murdered" claim. That's Hillary-health trutherism.

But so far right-wingers claiming that Clinton somehow faked her concussion have gone virtually unchallenged on Fox News and right-wing sites like Newsbusters and the Daily Caller. Everyone from Charles Krauthammer to Sean Hannity to Laura Ingraham and former U.N. Ambassador John Bolton have gotten into the act. Even after reports that Clinton also suffered a dangerous blood clot between her brain and skull, Bolton not only failed to apologize, he suggested that she was dodging Benghazi questions in order to protect her 2016 chances.

This is crazy. Obviously, the Benghazi-coverup stories began as a way to hurt Obama, by alleging that he wasn't telling the truth about Libya because he didn't want to reveal that al-Qaida was a factor in the murder of Ambassador Chris Stevens, especially at the height of election season. After the election, the claims continued, and they mainly focused on the Sunday-show statements of U.N. Ambassador Susan Rice. They managed to torpedo Rice's chances to succeed Clinton as secretary of state.

Now they're going after Clinton herself, and no doubt some of it is designed to hurt her 2016 chances, even though she herself insists she won't run. It's remarkable to me how few mainstream, respectable Republicans have come to Clinton's defense.  The Washington Post's  Kathleen Parker did so today, in a column that declared "the attacks on Clinton during her illness, essentially attacks on her character, have been cruel and unfair." But Parker is the rare Republican known for fairness and honesty (she was an early public critic of Sarah Palin, when others merely trashed the V.P. nominee anonymously).

It would be nice to see the three amigos, Sens. John McCain, Lindsey Graham and Kelly Ayotte, who cruelly and vindictively railroaded Susan Rice, get together and tell their wingnut friends the same thing. But tolerating Clinton health trutherism is like tolerating birtherism for the GOP: You don't necessarily share in the craziness (and in the case of birtherism, the racism) that inspires it, but you benefit from its toxic half-life nonetheless.

I talked about the crazy Benghazi allegations on "Hardball" today and I was surprised to find myself in strong disagreement with the Daily Beast's Lauren Ashburn. Ashburn acted shocked at the Clinton slurs; I argued they're just the latest outbreak of Clinton-Obama derangement syndrome. But even more significant, Ashburn tried to declare that both sides are somehow equally to blame for the "incivility" of our current political debate, claiming that someone (she didn't say who or where) had wished death on former President George Bush when the news broke that he was in the intensive care unit.

I'm on record, often, saying that false equivalence about haters on the right and left is dangerous. To equate Democrats and Republicans on this front, you'd have to imagine, say, Susan Rice suggesting something that crazy, not to mention unethical, about Mitt Romney's secretary of state, had the 2012 race ended differently. And you can't equate some random commenter on the HuffPost with people like Krauthammer and Hannity who have regular perches atop Fox News. That would be like Chris Matthews wishing death on the former president; it would never happen.

You can watch my segment with Ashburn and Michael Smerconish below: