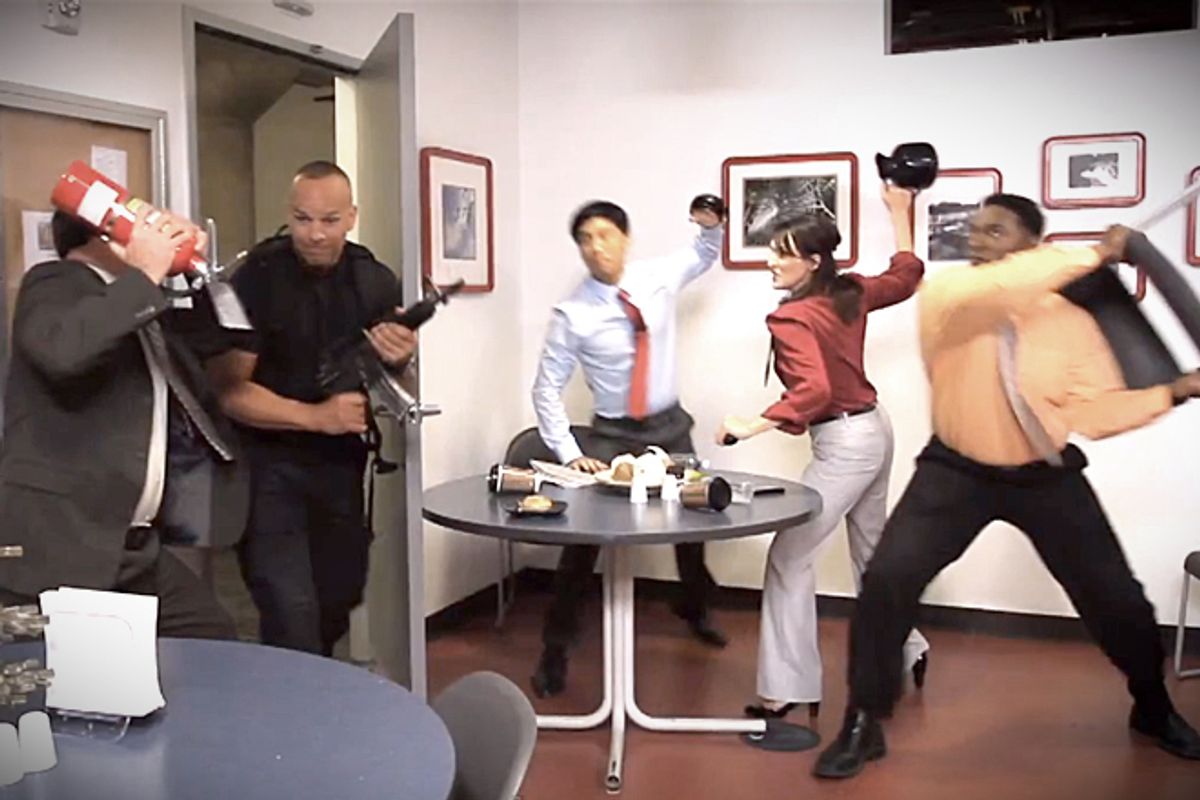 It's the strangest low-budget action movie in ages. Ominous music cues that it's not "just another day at the office" -- and then a sunglassed, well-armed psycho/Dwayne Johnson look-alike bursts in and starts shooting. The short film, titled "Run Hide Fight," a product of the Alabama Department of Homeland Security, is an instructional tool for how to cope in an "active shooter" situation. It's as awkward and stilted as any piece of industrial filmmaking or any workplace training video you've ever endured. Yet the subject matter – and the mere need for its existence at all – makes it a gut punch nonetheless.

To its credit, "Run Hide Fight" -- a $200,000 production made with public funds -- is a relatively common-sense how-to primer. It's not easy to make a movie about a scenario no one wants to envision. But in the aftermath of the December mass shooting at Sandy Hook Elementary, it's been hard to think about much else. Since that December day, a number of theories on how to avoid future tragedies – or at best curtail the damage – have emerged. Many of them have been full-on bananas – from the NRA's suggestion we arm our schools to the National Review's roundtable that featured the brilliant hope of relying on "huskier 12-year-old boys."

In contrast, "Run Hide Fight," which specifically addresses violence in a workplace, takes the far more obviously logical tacks like "Always try and escape and evacuate" because "getting out of harm's way needs to be your number one priority." If that's not possible, it says, hide and "Do your best to remain quiet and calm" -- a strategy that very likely saved teacher Kaitlin Roig and her 15 students during the Sandy Hook massacre. Only if no other resource is available does the DHS advise "physical aggression."

Despite the horrific glut of recent tragedies, the odds of you or me ever being caught in the midst of a mass shooting are still, in the words of criminologist and mass murder expert Grant Duwe, "probably no greater than being struck by lightning." Yet, just as slender odds still don't mean you go standing under a tree holding a metal rod in a storm, they likewise don't mean it isn't useful to know some basic safety strategies. And if you need evidence that the DHS video is chillingly timely, note that the video has been quietly up on YouTube since November – weeks before the Newtown tragedy. Even more strikingly, "Run Hide Fight" was originally created for the city of Houston earlier last year. It was made before Aurora. It was made before Oak Creek.

In the aftermath of Sandy Hook, however, the Alabama DHS has decided to push its campaign harder, sharing the video and timing it to Gov. Robert Bentley's request for the state's DHS with an "incident response" plan for dealing with mass violence. State officials will meet next week with "legislators, law enforcement and education officials" to discuss safety strategies. The state is certainly no stranger to mass shootings -- in 2009, Michael Kenneth McLendon killed 10 people in a sprawling murder spree across Geneva County. And last summer, three people were shot to death in an incident outside a Houston County strip club.

The simplistic message of "Run Hide Fight" -- and its stilted, let's-beat-the-shooter-with-a-chair plot -- is that "sometimes bad people do bad things." It's self-evident and corny. But it's also accurate. Aurora and Oak Creek and Sandy Hook were the most recent examples of that truth, and they won't be the last. So here's your instructional guide to what to do the next time a maniac opens fire. Welcome to America's new normal.