Welcome to the new Civil War

Lincoln's unfinished war rages on, as the neo-Confederacy tries to turn back the clock on women, gays, God and guns 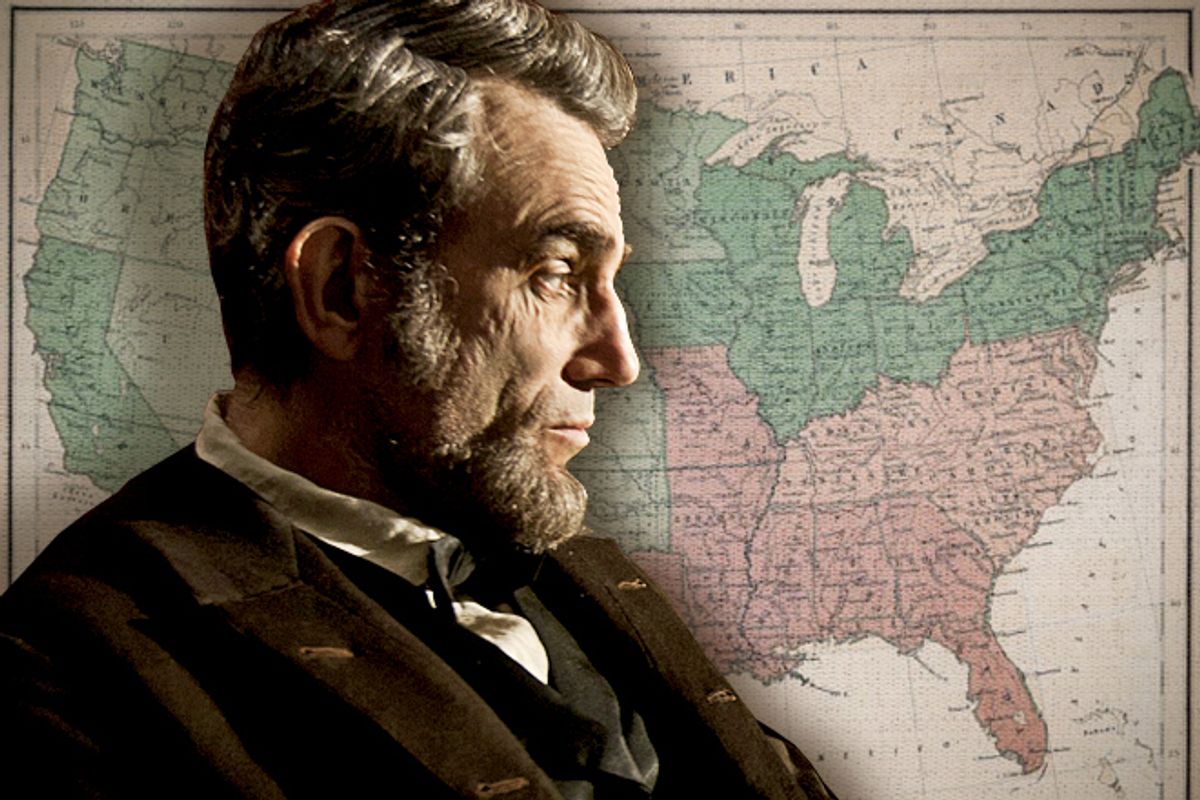 On a repeat viewing of Steven Spielberg’s “Lincoln” over the New Year’s holiday, a scene I had barely noticed the first time jumped out at me. Confederate vice-president Alexander Stephens (played with reptilian gentility by Jackie Earle Haley), in a secret meeting aboard a steamboat with Abraham Lincoln and Secretary of State William Seward, faces up to the reality that the era of slavery has come to an end. Ratification of the 13th Amendment, Stephens muses, will destroy the basis of the Southern economy and the South’s traditional way of life. “We won’t know ourselves anymore,” he says.

If only it had been so. What an affluent slaveowner like Stephens feared most, no doubt, was the utopian vision of “radical Reconstruction” imagined by legendary abolitionist Thaddeus Stevens (Tommy Lee Jones in the movie), in an earlier conversation with Lincoln in the White House kitchen. Stevens envisioned a future in which all the land and property of the Southern aristocracy would be dispossessed and divided among the emancipated slaves, building a new society of free soil and free labor amid the ruins of tyranny. To put it in contemporary social-studies terms, Stevens hoped that by uprooting and destroying the South’s slave economy, one could also replace its culture.

It didn’t quite work out that way. You can’t boil one of the most tumultuous periods of American history down to one paragraph, but here goes: Lincoln was assassinated by a domestic terrorist and replaced by Andrew Johnson, who was an incompetent hothead and an unapologetic racist. Within a few years the ambitious project of Reconstruction fell victim to a sustained insurgency led by the Ku Klux Klan and similar white militia groups. By the late 1870s white supremacist “Redeemers” controlled most local and state governments in the South, and by the 1890s Southern blacks had been disenfranchised and thrust into subservience positions by Jim Crow laws that were only slightly preferable to slavery.

So even though it’s a truism of American public discourse that the Civil War never ended, it’s also literally true. We’re still reaping the whirlwind from that long-ago conflict, and now we face a new Civil War, one focused on divisive political issues of the 21st century – most notably the rights and liberties of women and LGBT people – but rooted in toxic rhetoric and ideas inherited from the 19th century.

We’ve just emerged from a presidential campaign that exposed how hardened our political and cultural divide has become, and how poorly the two sides understand each other. Part of the Republican problem, in an election that party thought it would win easily, was that those who felt a visceral disgust toward both the idea and the reality of President Barack Obama simply could not believe that they didn’t represent a majority. As many Republicans are now aware, the party now faces an existential crisis. It’s all very well to go on TV and talk about attracting Latinos and downplaying cultural wedge issues. But the activist core of the Republican Party is neo-Confederate, whether it thinks of itself that way or not. It isn’t interested in common cause with Mexicans or turning down the moral thermostat. Just ask Rick Santorum: What it wants is war.

In the recent “fiscal cliff” negotiations, which ended (of course) in yet another short-term stopgap measure, most congressional Republicans, having sworn a blood oath never to raise taxes on their millionaire patrons, were content to let the nation slide into chaos and catastrophe rather than reach a compromise with the president they have consistently depicted as a socialist renegade or alien interloper. It was like a third-rate farcical reprise of the great congressional struggle depicted by Spielberg and screenwriter Tony Kushner in “Lincoln,” when the defeated and embittered Democrats of 1864 fought a rear-guard action to defend slavery, in defiance of not just history, morality and basic human decency but also tactical judgment and common sense.

Thanks to Lincoln’s great political victory in that Congress, slavery has faded into the history books -- maybe too much so. As the controversy over Quentin Tarantino’s slave-revenge western “Django Unchained” demonstrates, it still isn’t a history we know how to talk about. It may seem melodramatic to claim that the curse of slavery hangs over us still, but Lincoln himself clearly foresaw that possibility, as his slaveowning predecessor Thomas Jefferson had before him. In Lincoln’s Second Inaugural Address, he described slavery as an offense against God, and the bloodshed of the Civil War “as the woe due to those [on both sides] by whom the offense came.” Perhaps a cruel cosmic justice was now being extracted, he concluded, and the war would go on “until all the wealth piled by the bondsman's 250 years of unrequited toil shall be sunk, and until every drop of blood drawn with the lash shall be paid by another drawn with the sword.”

I’m not sure America ever paid that debt, in blood or money or any other currency. The lingering effects of our racist history – from the resegregation of our public schools to the enduring and astonishing “wealth gap” between whites and blacks – are national problems, not just Southern problems. Our new Civil War is infused with the undead spirit of the old one and waged by a rebellious neo-Confederacy rooted in the states of the Old South, but its influence can be felt, as with the pro-slavery forces of the 1860s, in every part of the country. (Fernando Wood, the fiery pro-slavery Democrat played by Lee Pace in “Lincoln,” was a former mayor of New York.)

The new Civil War is not entirely or even principally about race, although there’s no mistaking its pernicious racial component. Even making allowances for Bobby Jindal and Allen West, the neo-Confederate forces are perhaps 99 percent white, in a nation whose fastest-growing demographic groups are neither white nor black. While the issues of the new Civil War are contemporary, its rhetoric is ancient and all too familiar, from states’ rights and resistance to Washington to claims of a special relationship with the Almighty and vague appeals to distinctive “cultural traditions,” employed as a justification for bigotry and oppression.

While the Civil War of the 1860s really was about slavery first and foremost – it was the foundation of the Southern economy, and had concentrated immense wealth in the hands of a small landowning caste – the true subject matter of the new Civil War is much less clear. Abortion and same-sex marriage play a crucial role, to be sure (and we may soon see guns and marijuana enter the picture as well). Those are symbolic issues that reflect larger social tensions around gender roles, sexuality and the “war on women,” but they are not just symbolic issues. Many people on the neo-Confederate side see abortion and Adam-and-Steve marriage as moral outrages or offenses against God, to borrow Lincoln’s phrasing, which must be stopped at almost any cost. Of course, pro-choice activists and marriage-equality advocates see those issues as matters of basic economic justice, guaranteeing to all people the kind of basic personal autonomy that men take for granted, or the common-law legal and medical rights that heterosexual married couples have long enjoyed.

We appear to be moving into an unstable Missouri Compromise period of American history, in which regional tiers of states adopt sharply different policies on reproductive rights and marriage rights in particular, but also seem locked into fixed political identities and differing views on fundamental questions of national identity and the national future. Within the past week, we saw Illinois and Rhode Island – core “neo-Union” states, if you will – move closer to legalizing gay marriage, while the Republican governors of Michigan and Virginia (exactly the kind of “border states” where these battles are being fought on the ground) snuck new restrictions on abortion through the legal back door.

If you correlate the states where both same-sex marriage and same-sex civil unions have been banned and the states with the harshest restrictions on abortion, you begin to measure the breadth of the neo-Confederacy: Alabama, Arkansas, Georgia, Idaho, Kansas, Kentucky, Louisiana, Mississippi, Nebraska, the Dakotas, the Carolinas, Oklahoma, Texas, Utah. Most (but not all) are onetime Southern slave states and hotbeds of evangelical Christianity, and most (but not all) coincide with the familiar red-blue split between Republicans and Democrats. The battleground states of the moment, on these issues as on many others, are strikingly familiar: Florida, Michigan, Ohio and Wisconsin. All four are currently in the grip of neo-Confederate forces on a state level, and all four have enacted gay-marriage bans and abortion restrictions, even though Obama won them all in both of his election campaigns.

Do I even need to mention that none of the neo-Confederate states are in the Northeast or on the West Coast, regions where abortion remains widely available and same-sex marriage is rapidly becoming routine? Or that the neo-Confederate states of the South and the Plains States have sent nearly all of the intransigent, anti-taxation Tea Party members to Congress, while the neo-Union states of the East and West, with their polyglot, immigrant-rich populations, have elected few or none?

Ultimately, the Missouri Compromise collapsed (as did the short-lived Compromise of 1850 that followed it), tearing the nation apart and forcing a long overdue reckoning with the enormous evil of slavery.. We are heading toward a similar reckoning now. Secession is no longer an option (although many, on both sides, might wish it were), so the new Civil War is not likely to involve pitched battles in the meadows of Pennsylvania, or hundreds of thousands of dead. Today’s fights over abortion and gays and God and guns have a profound moral dimension, but don’t quite have the world-historical weight of the slavery question. As with slavery, however, it’s tough to imagine any viable long-term middle ground. At the moment, two women who get married in Iowa will have no legal relationship if they move to Kansas, and a teenage girl in Seattle can easily get a safe and legal abortion while her cousin in Dallas faces mandatory counseling, a 24-hour waiting period and a parental consent law. (If they have another cousin in rural Mississippi, she probably won’t find legal abortion services under any terms.)

Regardless of how you feel about those issues, that’s nuts. No nation-state can function indefinitely on that kind of patchwork-quilt basis. Then again, this is the United States of America, land of semi-permanent political paralysis, so “functional” doesn’t really apply. It’s tempting to call upon history and proclaim that the only possible outcome of this new Civil War, after many years of ugly politics and occasional outbreaks of craziness and violence, will resemble the outcome of the last one: the continued expansion of constitutional rights and freedoms and the final defeat of the Confederate strain in American political and cultural life. But other, darker outcomes are definitely possible, and I suspect that as long as we’ve got a country, the Confederacy will still be with us.