Laura Dern: "We shouldn't be able to watch CNN and then go to sleep"

The "Enlightened" star's Amy Jellicoe has gone from "Lucille Ball to Norma Rae," and she wants to change the world 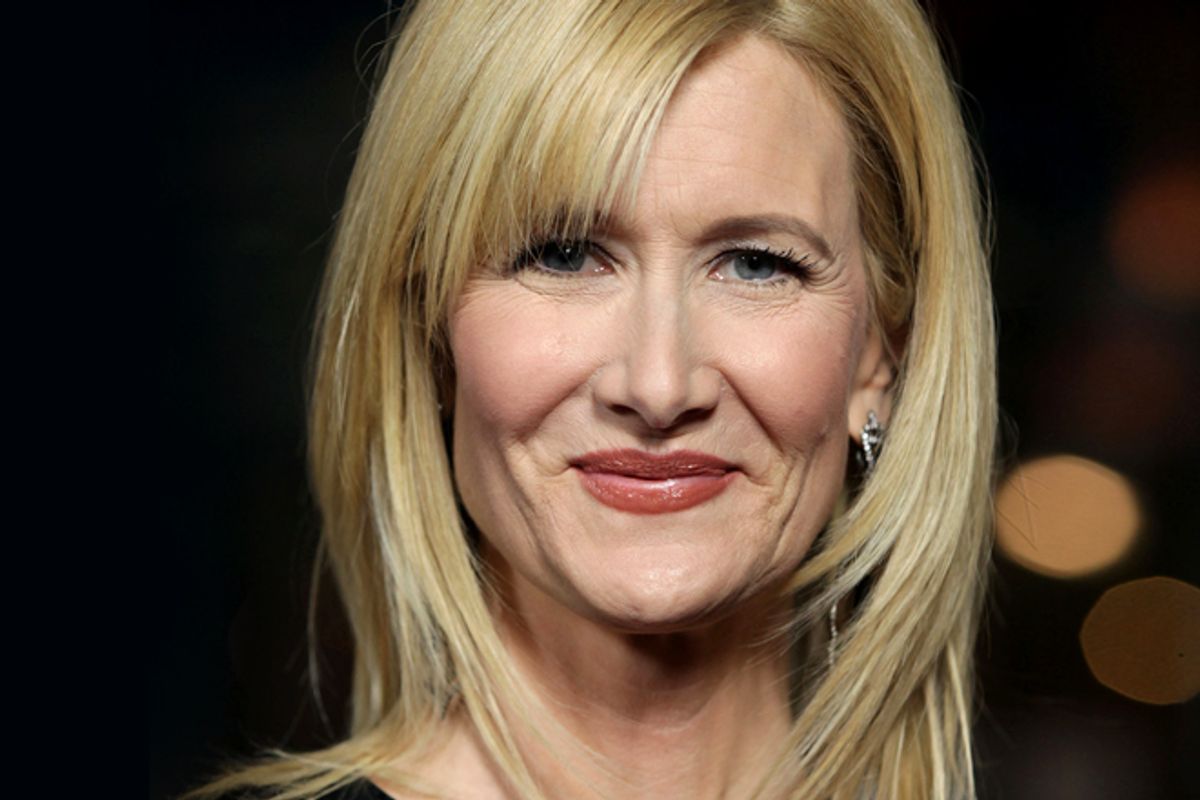 HBO's "Enlightened" is not quite like anything else on television: Moody and lyrical, ostensibly comedic, it focuses on the trials and tribulations of Amy Jellicoe, played by Laura Dern, a former addict and rage queen who is actively, painstakingly, not only trying to get her life back in order, but change the world. In the new season, which begins Jan. 13, Amy attempts to take down her corporate overlords at Abaddon, a move so brazen and crazy, it just might work. "Enlightened" is Dern's first television show —  her movie credits from David Lynch through "The Master" are too numerous to mention. We spoke just after the Sandy Hook shooting, and during our conversation, she revealed a deep level of empathy she feels for her character's rage, innocence and desire to change the world.

"Enlightened" has such a unique tone in that it’s both very bleak about how hard it is to be a human, but also extremely positive about our ability to change things. This season Amy Jellicoe, intense and naive as she is, makes a difference. Her naiveté makes her try things that someone who knew more than her would think it was ridiculous to attempt.

That was the point of the show. That was the seed that was planted with me, early on, was that I was very interested in the level of cultural apathy that was all-pervasive in this country a number of years ago, pre- the Obama election. I think everybody was feeling it. And my description to HBO, if I could fantasize a character, would be someone who was both reactive enough and emotionally wrought enough to feel everything in an enormous way and therefore actually want to do something about it. One of my favorite movies is “Network,” and one character says in that film, “I’m mad as hell and I’m not going to take it anymore.” And that film proves that it sometimes takes someone who is seemingly crazy to effect change. But this took it to another level. When HBO asked me to sum up how I would describe Amy, I said, “What if Lucille Ball became Norma Rae?” And that was my original thought process about it. She believes that you can effect change. Even though it is naive, it’s working. Even though she is impossible, she’s amazing. There’s a lot of duality in the show. It is naive but she is setting the example that one voice does make a difference.

But more than Lucille Ball or Norma Rae, Amy Jellicoe can be really annoying at times. She means so well, but it seems like being around her would just be very intense and difficult. Do you feel that, or do you feel so much affection for her that you would like to encounter her?

Both. I think we all have encountered her, some of us within ourselves, and many of us outside ourselves. There are things that are incredibly complicated about her that I think make the show entertaining. But the part that I think we all can tap into is that life is overwhelming. And I think we all feel it, particularly this week [of the Sandy Hook massacre]. We’re constantly reminded that we live in an insane, somewhat terrifying world. And every time we turn on the news there are atrocities that we’re witness to. And somehow we think we’re supposed to sign up for just dealing, just handling it. You know, still going to Starbucks and still having a lovely dinner with someone we care about and still getting the Christmas presents wrapped. But there is a part of Amy in all of us, which is the part that says, "You know what? It’s too much. You can’t function with this level of horror. So what do we do? What are we going to do?" And that’s the part of the show that really interests me and the part of Amy that really interests me. The part that may be flawed, and may be annoying, and may not be the most fun date, or the most fun hang, but it’s people like her that are actually waking the rest of us up to the fact that we actually shouldn’t be able to watch CNN and then go to sleep. That shouldn’t happen anymore.

It’s now become impossible for me to watch the news before bed. It’s too excruciating. We have to, hopefully, figure out a mindful way to be connected to what’s going on in the world, and try to effect change, but also not completely fall apart. I think we can explore this on the show because Amy is so impossible, and is funny, and too flawed, so that maybe it gives us some room with satire to consider how we’re going to do it. We can feel like we’ve got it a little more together than Amy, but the world doesn’t make it that easy. Every day we’re faced, as Amy is in this season, with wrongdoing. Every day we’re walking through things that Amy is walking through and hopefully we’ve handled them a little bit better, but in a way we have the right to act just like she does because it’s nuts. Life is nuts.

This season it does seem like Amy has really grown. She pulls off corporate espionage.

We always talked about how we would love that part of the season to really feel a little bit like an homage to “Revenge of the Nerds.” It takes a group of these people  [Amy and her colleagues] to actually take down a Monsanto or a BP or whatever the company of choice is that has poisoned land or water. It’s like you don’t know how the president is ever going to effect change, or Congress or the Senate, but somehow a few dumbasses — forgive the expression — could get together and do the very thing that corporate would never think people would be stupid enough to try. And maybe that’s how you can actually make a difference. It takes a level of intellect too, and that’s what’s sort of fun about it. It’s like Amy’s an idiot, but she’s actually not at all. It’s not that she’s dumb, it’s that she is just such a wild innocent. She doesn’t think that people would be intentionally cruel. And she doesn’t think that you’ll go to jail for certain things. And she thinks that if you say what’s true you won’t get in trouble for it, people will care to know. Those kinds of morals we have lost are what make her beautiful and also make it possible for her to bust them. Her determination is what makes it happen. It’s like we’re forced to appreciate the very flaws in her that we cringed at.

In one of the episodes Amy goes on this reverie about technology, and how we’re all able to connect because of it. She starts a Twitter account. Do you think screens are making us less or more engaged?

Both. We see, just like Amy, how mass communication is extraordinary. We never would have seen what happened in Egypt without iPhones and Facebook. It is the new revolution — but my children don’t look at me when I talk to them because they’re on their iPhones or iPads or they’ve got the game going on. The level of effort it takes as a mom to actually be an evil, horrific, monster of a mother by making them get off the computer when 14 friends from their class are chatting on the same game, and the other kids get to stay up until 9:30 on a school night, why do they have to go to bed at 8:30? There’s a whole world of 8-year-olds meeting up to chat online after school. And they’re in their thing, and I’m like, “How was school,” and they’re like “Oh my God, you did what? Yeah! Yeah! What, Mom, what?” [Laughing.] It’s a nightmare. And I’ve rarely had a meal with a friend or a primary partner in my life where they were looking at me for longer than four minutes at the table, without checking a device. And me too. Something buzzed, and oh my god. I’m not a highly advanced technological person, so I veer more on the side of how it has ruined our empathy and communication skills, but at the same time it’s benefited my life enormously.

Did you approach this season as though it’s possible you might not get renewed for another?

I think when we first started talking about it, we imagined three seasons, to be honest, all having a very different moral compass and theme, it kind of being a trilogy of falling apart and then getting it back together, and then when you get it together and you are seemingly lauded for it, how well do you handle that? Which would be the next season. I’ve never done series television, but it seems that that’s pretty common that at the end of each season you’re sort of tying up the stories that are left, but you’re also creating room for the next chapter. It’s an odd thing compared to working in film for so long. But I think the goal is to give Amy her opportunity to really do this.

How have you found making TV compared to films?

I’ve loved it because, at HBO, it is doing a film. It’s been amazing. Mike [White, co-creator and showrunner] writes the scripts before we start, so we’re not getting pages before we go, though we’re making changes readily through the season. So HBO affords us the time to know the season before we start it, which is amazing. And it’s the length of a movie shoot. And, in a way, each season is kind of its own movie. So it feels very, very similar and probably the only difference is we have these amazing directors, and film directors come in to do the episodes, but they come and go as opposed to one person at the helm directing everything. That would be the biggest difference. And also exploring an aspect of Amy, instead of a beginning, a middle and an end. Everything else I love in the same way.