As a stripper, my thick legs were a liability. But they also carried me through drug addiction and grief 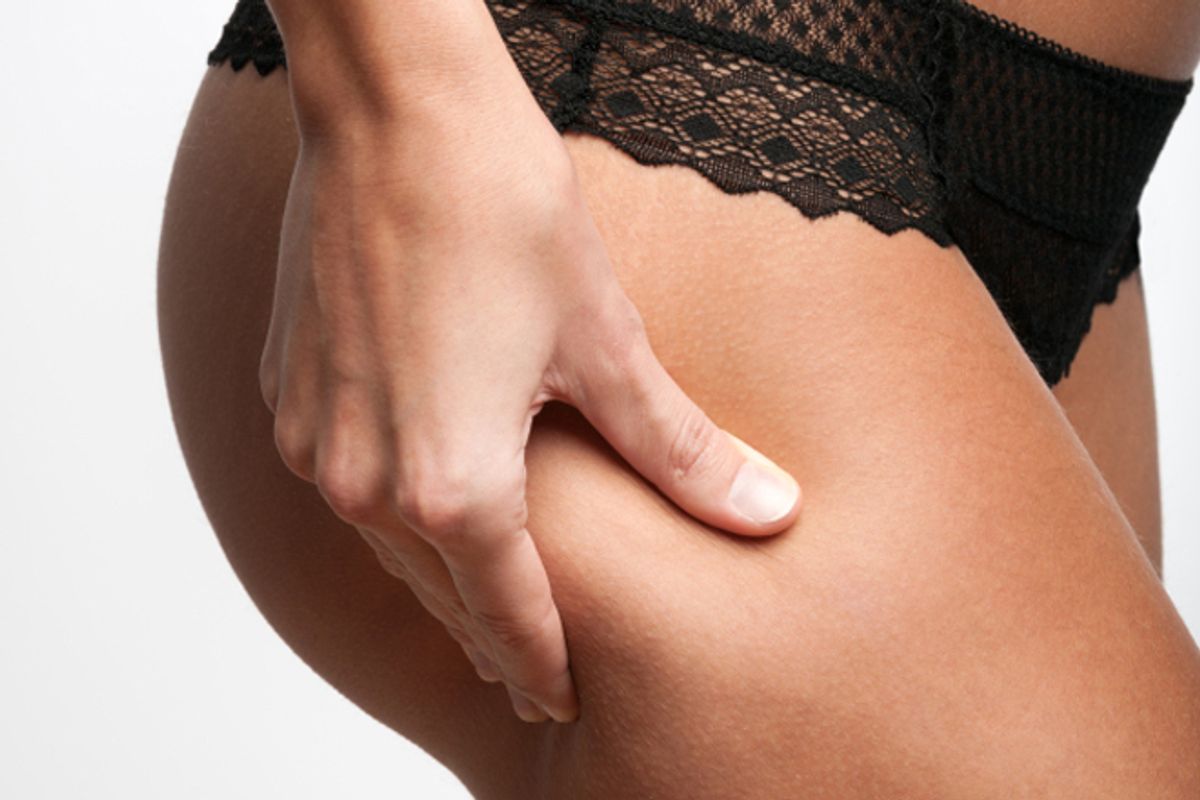 "Body Issues" is a personal essay series about obsessions with our shape.

The fourth rejection happened at a small topless club called Little Darlings. I leaned over to Trixie. “Ask him why he won’t hire me,” I whispered. She walked over to the manager and said something I couldn’t hear over Van Halen’s “Panama.” They disappeared behind a door.

On the floor of the club, a small-boned brunette with flawless golden skin and a ponytail sat on a guy’s lap, and then led him to the VIP lap dancing area. I wondered if my candy heart tattoos were too edgy for Vegas. So far, the three fanciest strip clubs hired Trixie while I fumed on a bar stool, wondering how I’d become so unemployable. After all, I was blonde. I had big boobs. I was tan.

When Trixie appeared again, she lit a Menthol and tossed her lighter into a glass ashtray. She looked at me like she had a horrible secret to tell.

“My hair too short?” I unclipped a rhinestone barrette and shook my stiff curls loose.

“Nuh-uh.” She exhaled a minty cloud above my head. “There’s something puffy going on.” She pointed at my legs.

I wanted to march behind the bar and down a fifth of vodka. I wondered where I could score meth in Vegas and snort my way back to ripped abs and shredded hamstrings, audio hallucinations and missing teeth. Sober for nearly three years, I’d just finished a 382-mile bike ride for charity, and I was in better shape than I’d been in for years. But it wasn’t enough.

“I need some speed,” I said. I sucked in my stomach, devastated. My legs had always been the bane of my existence. Now, they were messing with my income.

I was born to strip. If there had been a pole in my mom’s womb, I would have never left. By age 5, I danced ballet, tap and jazz and blasted music in every corner of my house. I made up silly dance routines to perform for my weary working mom. “Watch me!” I squealed. She nodded with bored amusement while I undulated to Donna Summer and wiggled my pelvis to David Bowie. Pink Floyd’s bass line rocked my tailbone and my butt bounced to Blondie.

I may have been a star on the private stage of my living room rug, but I was horrified to realize I didn’t have a Swan Lake body like the other girls in class, with their flat butts and wiry legs. My thick thighs were ball park franks packed into pink tights. When I could no longer stand my reflection in the mirror of the studio, I quit ballet and stuck with tap, where I could hide in black leggings and a loose T-shirt.

At 10, Dad drove away in his new blue and silver 280-ZX and moved in with a woman named after a doughnut, leaving my mom and me. Mom took me to school and drove me to tap lessons. During one recital, the hot stage lights blinded me and my dumb legs wouldn’t budge. My feet forgot the music, my knees trembled and I ran backstage. I wanted to disappear forever but my legs held me up. “It happens once to every real dancer,” Mom said. I hid my face in her thighs.

And I discovered my legs were fast, too, when I beat Mindy in P.E. class. Mindy was a freckled towhead with legs so white you could see a river of purplish veins on their surface. Not only was she slim like the girls in Seventeen, she was quiet, nice and in advanced math. I was a bulimic cheerleader with new-wave hair and bad grades. But when I sprinted, my legs blazed out ahead. I made the relay team that day, but the accolades only troubled me. I felt more comfortable in my own failure. And so I drank until I was sick and numb -- stretched my thighs wide for older boys who licked them and called them “hearty.”

Still, no matter how much I starved them and retched, my legs were never going to be skinny. And so I moved on to meth, which shrunk me down to a jittery 108 pounds. Even then, my thighs remained solid and strong as old redwoods.

But the meth came with too many consequences. I was a mess. I kicked the habit, and put on 35 pounds in three months. By stripper standards, my sober legs were borderline vulgar. Sobriety had gifts, though: sleep, clear skin and the ability to spend the tips I made stripping on gyms and bills instead of squandering it on speed and Xanax. The voices stopped and my energy level surged. I started bike riding. In my skin I felt fully awake and prickled with life. And even though I was one of the curvier girls to fling my bra on stages from North Beach to Market Street, I danced with clear-eyed abandon and straddled customers with all the flesh that nature had given me. My lover at the time left strawberry-colored bite marks like steps leading up to my crotch. I savored the bruises from her flogger and counted them under my fishnets like a dozen hash marks on my bed post. My sober legs were lucky.

And so, hoping to make some money, I decided to fly to Vegas with Trixie for one of our frenzied stripping trips. We’d done this before, dancing for a week in Hawaii and making piles of cash. My goal was to pay my student loans; Trixie’s was her credit card debt. We planned to stay sober. Funny enough, Trixie was also my AA sponsor.

But that day in the club, rejected for my magical, lucky thunder thighs, I secretly hoped for a relapse. Maybe Trixie would say she popped diet pills like Altoids and offer me some. Maybe just this once, I could score a quarter of tweak and hit a sickly anorexic bottom, just long enough to pay my debts. Not only did I want to get high to escape the humiliation I felt; I wanted my meth body back.

“Can I get you girls something?” A tiny blonde appeared in a red, white and blue bikini. She looked like she stepped out of an '80s Budweiser poster. She was carrying a cocktail tray, and I wanted to fling that thing like a Frisbee straight into the mirror behind the bar, hog-tie her and force-feed her a Po boy. Trixie shook her head no.

“That pack of Dunhill’s,” I said. Cigarettes. The one drug I could ingest without losing my sobriety date. I hadn’t smoked a cigarette since I was 16, but I grabbed the blue box and savagely tore it open.

“Let’s get out of here,” Trixie said. She slammed 10 bucks on the bar and we marched out of the club and into the sharp Vegas sunlight. We needed to find a club for bigger darlings that would hire a redhead with racetrack glutes and her fat sidekick; a place where my lucky thighs could wriggle and kick in the dark heat.

Finally, we found the place: Wild Jay’s. It was painted black and looked like an abandoned liquor store. Inside Wild Jays was so smoky, I couldn’t make out the faces of men beneath their large cowboy hats, but I could see their hands holding cigars. The manager had a Yosemite Sam mustache and wore a polyester brown jacket. “C’mon up!” he said and led us into a cramped office with wood paneling. “You two sisters?” He showed us a framed picture of him with his arm around a Pamela Anderson look-alike — his fifth wife. “You both change right now and bunny-hop onstage. You got a job.” He offered us tequila shots. We declined.

It wasn’t the perfect gig. That place was actually pretty dark. But I took the stage and wrapped my thunder thighs around the pole and burned rubber for the next eight hours. Sober and naked, I felt vulnerable and strong moving my hips to the Rolling Stones and crawling on my knees toward the appreciative grins of strangers.

Customers didn’t call me a heifer or snicker at my corn-fed physique. They favored fat bottom girls and luscious legs. We left after 2.a.m. with matching sore throats, headaches and about $300.

The next day, Trixie confessed her desire to hit Little Darlings and Olympic Gardens where she could enjoy steady employment for the next several weeks. But I was done with Vegas. I boarded a plane home the next day with my Dunhill’s, and went back to San Francisco.

Back home in the Bay Area strip clubs, skinny strippers stole sips from little bottles they stored in their lockers. When they asked me for dollar bills to snort speed off the yellow linoleum counter top, my mouth watered. “Here,” I said and handed them a rolled-up bill. For a half-second I envied them. But my legs carried me away from the powders and walked up the stairs and onto that stage again. That was something I learned from my mom: how to keep on going when things got hard. I twirled expertly on the pole and danced for hours without stage fright or self-hatred.

I began to run again when my mom was diagnosed with cancer, and her body began to wither. While I was jogging, worry poured out of me, as though I could pound the cancer out of my mom’s stomach by sweating — like an exorcism by proxy. I jogged in silence around a reservoir where pools of sunlight glittered on its surface and lazy ducks waddled around its perimeter. I jogged to move my grief along and pictured my mom’s graceful legs in step with me. I am many years sober now, and I no longer smoke, although I'm still stripping. My legs will never appear in Playboy or strut down a catwalk. They’ll also never again sit next to Mom’s on her couch while she cuts recipes from magazines. I quicken my pace and feel lighter. My solid thighs are shapely, my calves athletic. They are resilient, sensual and strong — a gift from my mom.

Antonia Crane’s memoir about the sex industry and her mother’s illness, “Spent,” is forthcoming. She is a regular contributor to The Rumpus. Her essays, fiction and nonfiction have appeared in several journals and anthologies.