Does the president's legacy require chipping away at LBJ's, or building on it? 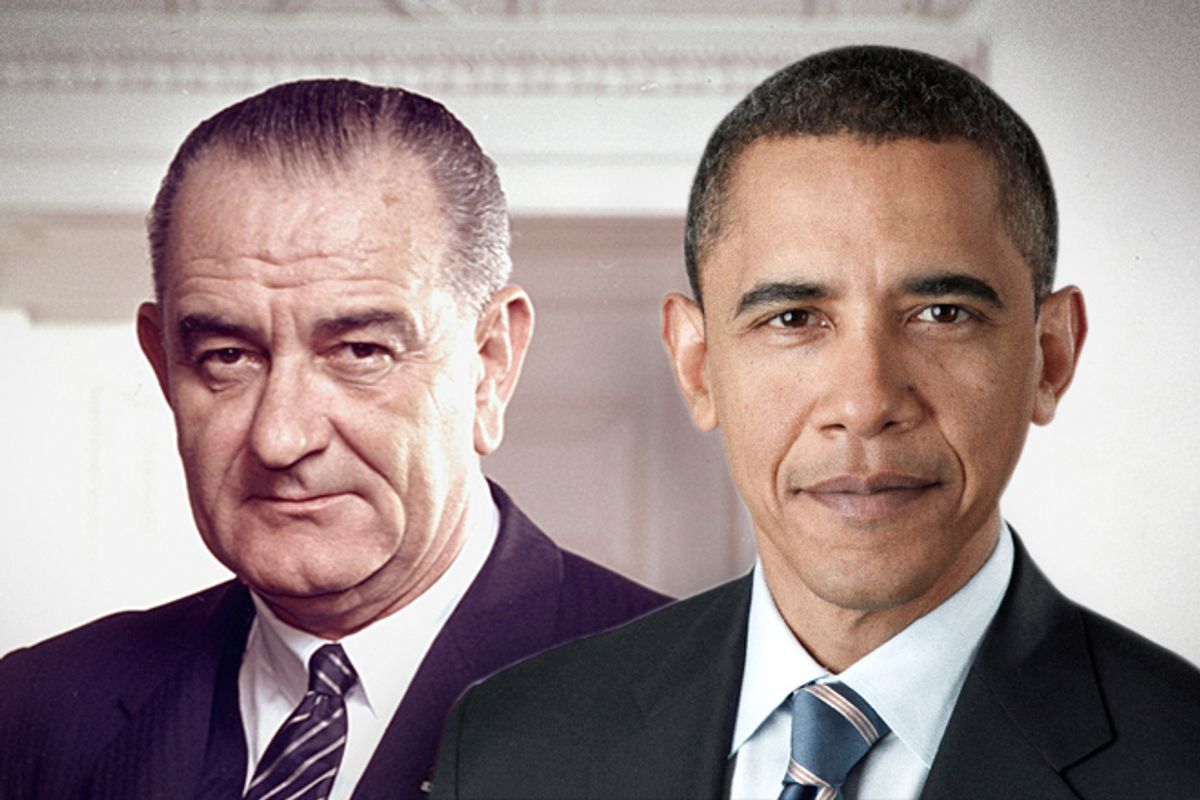 It was 48 years ago this weekend, Jan. 4 to be precise, that President Lyndon Johnson outlined his vision of "the Great Society" in his 1965 State of the Union address. Although lots of programs remain, his signature effort, and the one that remains strongest and by far the most popular, was the 1965 Social Security Act that created Medicare and Medicaid and expanded Social Security benefits. Outside of the fancy hotels and think-tank offices where cosseted Beltway deficit scolds and shiny "Fix the Debt" flacks convene, those programs are wildly popular, to this day.

There was genius behind the way both were created. First, in a country with a particular fear of slackers and moochers, the proverbial "free-riders," they were tied to your work history, with "payroll taxes" that at least partly helped fund your eventual benefits. They've come to be called "entitlements," a term the programs' would-be "reformers" use to make recipients sound like greedy entitled geezers, because you're entitled to them: You paid for them (or for part of them). Second, they went to a group we can all empathize with: senior citizens, whether because we have elderly parents or grandparents, or because we'll eventually be old ourselves (we hope). Finally, they were universal programs that avoided "means testing," because first Franklin Delano Roosevelt and then Johnson knew that programs that only went to the poor tended to be unpopular, poorly funded and politically vulnerable.

Thanks to those design innovations, Roosevelt once said, “no damn politician can ever scrap my Social Security program.” The same goes for Medicare, outside the Randian salons frequented by Paul Ryan and his friends. Ryan's proposal to replace Medicare with "Vouchercare" is part of what went down to defeat in the last election, just as George W. Bush's effort to use his 2004 reelection "capital" to privatize Social Security went no place, either.

"Scrapping" Social Security and Medicare isn't on the agenda right now, but "stabilizing" them is, and most of the mainstream proposals for doing so involve cuts to the program, whether by changing the formula for cost-of-living adjustments for Social Security, or raising the Medicare eligibility age. President Obama is on record supporting the "chained CPI" for Social Security, and he was widely reported to be willing to hike the Medicare eligibility age in his 2011 round of talks to lift the debt ceiling. "Means-testing" Medicare is even more popular, even among Democrats.

The president says he won't negotiate over a debt-ceiling hike again, and that's great. But at the very least, he will soon be negotiating with Congress over how to avoid the so-called sequester, the $1.2 trillion cuts to defense and social programs that were set to take place Jan. 1 -- the fiscal-cliff "deal" just postponed that reckoning. Debt ceiling aside, I believe Obama still wants some kind of "grand bargain," and why shouldn't he? Not only for glory, but to leave our social welfare state broader – as he did with the Affordable Care Act -- and more stable than he found it. It's an admirable impulse; the question is how far he'll go and exactly what he'll do to achieve it.

And with deal-makin' Joe Biden at his side, such a "bargain" could top off not only his legacy, but advance his vice president's shot at the presidency. Nobody who watched TPM's now-viral video of Biden working the Senate swearing-in ceremony, hugging every "mom" who'd have him, can have much doubt he'd like to run again, and not for dog-catcher.

So I expect there will continue to be talk of cuts to Social Security and Medicare, even though voters don't want them. Pro-cut Democrats won't call them cuts, they'll be "tweaks" and "adjustments" to "stabilize" the popular programs. I don't want to be in the position of arguing that neither program needs "stabilizing," especially as the baby boom wave ages. But it seems to me even some Democratic reformers are missing what has protected the programs: that they're universal, they aren't means-tested (although well-off seniors pay higher Medicare premiums) and they're tied to work. We should pay attention to what's kept these programs thriving and popular, and our efforts to "stabilize" them shouldn't mess with those.

Like many stark social policy choices, the answer is probably a little of both. What we can say for sure: The United States has the thinnest social safety net of any industrialized country. (Not coincidentally, countries with high levels of income inequality also have lower social trust.)

Unfortunately, outside of public education (which varies hugely in quality depending on where you live), Social Security and Medicare are our only large-scale universal programs today. The U.S. has the most rickety public opportunity ladder of any industrialized country. Universal programs for healthcare, childcare, preschool, some form of higher education, workforce transitions and unemployment benefits are all more common and more generous in other Western democracies.

For whatever reason, we haven't mustered the social trust and political muscle needed to create universal programs for more than just the elderly – universal preschool and higher education, to cite two pressing priorities. Our need to invest more in those areas – and in the young generally – is driving some to suggest that we have a moral duty to trim programs for the elderly to fund programs for the young. The National Journal's Ronald Brownstein recently framed the dilemma in racial terms, as a clash between "the brown and the gray," with an increasingly multiracial young America struggling, while seniors, who are roughly 80 percent white, hold on to their "entitlements."

The fact is, at a time when political distrust is rising, especially between leaders of the country's two main parties, it seems significant, and disturbing, that one widely endorsed area for "compromise" involves our two big universal guaranteed programs, Social Security and Medicare. If universal programs foster social trust, it might be a bad idea right now, as our country is trying to cohere across not only political but racial and ethnic lines, to dismantle our signature universal programs. What if we talked about creating more of them, rather than shredding the ones we have?

Many of the proposals to "tweak" the programs involve slicing and dicing populations in ways that add bureaucracy and make little sense. Raising the Medicare eligibility age does nothing about escalating healthcare costs; it merely passes those costs on to other people, either beneficiaries or state and local governments, and it makes the costs higher by removing those people from the well-run, low-overhead Medicare pool. It's a lose-lose.

Raising the eligibility age for both programs for only some people – the wealthy, say, or people with sedentary, less demanding careers – would take away something else that's great about the program: There's far less bureaucracy than in means-tested programs. Means-testing for Medicare might actually cost money, or come close. Raising the eligibility age for people who've had high lifetime incomes, as proposed by healthcare management expert Ezekiel Emanuel, puts the government in charge of deciding who's in need and who's been profligate with a lifetime of earnings. (Did I really need to send my daughter to college?) Imposing a "chained CPI" but exempting some seniors or building in higher benefits for the very old, again, takes a fairly simple program and makes it more costly, complicated and divisive.

And bureaucracy aside, it's hard not to notice that the end result of all those moves is to do what FDR and LBJ opposed: to throw more Americans back into the private market, making it necessary for them to invest more of their income before they retire and purchase their own health insurance for longer. Markets do some things well. Insuring healthcare for seniors, or guaranteeing a floor of income when they retire, are not among them.

One way I think about the march of human progress is that over time, we've managed to extend basic rights and certain privileges once reserved for the rich to the non-rich. Politically, in this country that meant expanding voting rights gradually, from white men who met certain qualifications, to all white men, to black men, to women, and then, with the Voting Rights Act, to every adult. On the material front, it began with little things: a defined period known as "childhood," safe from compulsory labor, along with basic education. It expanded to a safe workplace. Weekends. Vacations. Temporary social insurance in hard times, and finally, a period in old age that's safe from penury. We reduced the power of the wealthy, whether feudal lords or modern CEOs, to command that we work from cradle to grave.

We pretty much stopped there. Laws to prevent discrimination certainly helped people climb out of poverty, but too many people got stuck there and more are returning there every day. Still, the goal now shouldn't be to sacrifice what we have, but to extend it to more of us.

Sometimes I worry I'm being obsessive over these two programs, implacably opposing the various adjustments proposed in the last 18 months of bargaining toward a grand bargain. Maybe you could even argue that their "universalism" isn't protecting the programs as much as it used to, given the growing number of super-rich who live in their own worlds. We've really only had this phenomenon for a relatively short while -- as recently as 1980, the average CEO only earned 42 times what his employees did; now it's 380 times -- but they're the people who happen to disproportionately control Congress and the media. They can't imagine themselves ever needing Social Security or Medicare, and they can't imagine anyone they know needing it either.

But you need a partner to negotiate smart changes, and today's Republicans aren't trying to fix the two programs, many are trying to kill it, turn Medicare into vouchercare and privatize Social Security. Raising the eligibility age is a crucial first step on their march backward.

My other worry is whether these two hugely popular programs, which target only one admittedly large demographic, the elderly, are somehow crowding out social spending for other people – most worrisome, the younger people we've disinvested in over the last 30 years. Head Start, for instance, was another Great Society program; it still reaches less than half of all eligible preschoolers. The program isn't perfect, but it's appalling that some form of high-quality preschool isn't universal today.

The other big priority left unaddressed by the Great Society was employment. That same year that Medicare was enacted, Sargent Shriver, Daniel Patrick Moynihan and others came to Johnson with big proposals for public works jobs to do something about the rising problem of unemployment, and particularly black male urban unemployment. Johnson nixed those proposals every time, as too expensive (especially given Vietnam) and impossible to administer. Unemployment among young men, particularly young African-American men, is at crisis levels, above 40 percent according to the Labor Department. There's no doubt we left the Great Society unfinished, and the president is challenged to find the resources to help those who need it most.

In his first inaugural address Obama said we'd solve more problems “if we could just recognize ourselves in one another.” Maybe this next multicultural generation will develop the social trust to finish the job. As I've written before, when mulling the problem of "the brown against the gray," the gray will never be brown, and thus may sadly lack empathy for this new generation, but the brown will certainly be gray. Polls show they support a greater role for government in solving the country's problems than their elders do. It would be a shame if we taught them that we can't afford the only universal programs we've achieved.