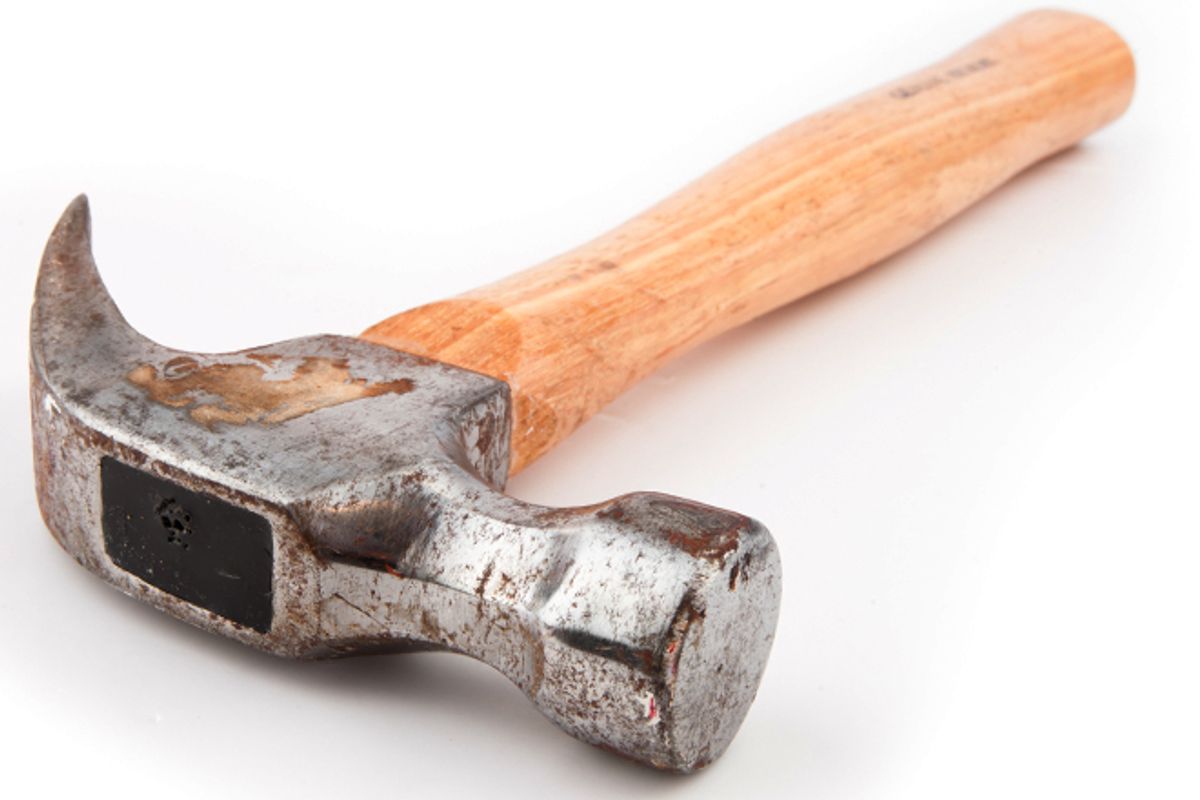 In the perverse logic of the anti-gun control crowd, the fact that things other than guns sometimes kill people means that we shouldn’t regulate guns. Whether it’s cars, kitchen knives or 1990s violent movies, there are plenty of dangerous things in the world, so depriving Americans of their fundamental rights to guns will be ineffective at best, and dangerous at worst.

But the latest non-gun weapon fetish on the right is hammers. Ever-quotable Texas Republican Rep. Louie Gohmert explained in a recent radio interview:  “I refuse to play the game of ‘assault weapon.’ That’s any weapon. It’s a hammer." Democrats want to ban dangerous military-style assault weapons and conservatives want to have a semantics debate about the term.

Breitbart.com added some numbers to the assault hammer crisis, reporting last week that more people are killed every year with hammers than with rifles. Indeed, according to FBI’s online homicide database, 611 people were killed with “blunt objects” (including hammers and clubs) in 2009, compared to just 348 with “rifles.” This, Breitbart argues, shows that “Democrats' feverish push to ban many different rifles” is bogus. The meme took off in the conservative blogosphere and quickly hit all the most prestigious sites: Fox Nation, World Net Daily (the birther one), Alex Jones’ site (the weirdly paranoid one), and even the John Birch Society’s magazine (the other weirdly paranoid one). Even CBS News wrote up the stat -- without crediting Breitbart (or vice versa, it’s unclear which story was posted first).

It’s a cute little meme, if wildly and obviously dishonest. First of all, set aside the fact that hammers and kitchen knives and cars are useful things outside of their capacity to maim, banning them would have tremendous negative impact on our economy and lifestyles. Guns, on the other hand, are designed specifically, primarily and exclusively for one purpose -- to kill things. They have no other purpose, and heavily restricting their use would have no obvious impact on the economy or modern life (hunting will always be allowed).

Now, while rifles account for only a few hundred homicides every year, guns overall are responsible for many, many more murders -- almost all of them. If you add up all the other methods used to kill people in 2011 (fire, drowning, poison, strangling, hammers, etc.), you get 4,081 non-gun homicides. That’s fewer than half of the 8,583 gun homicides. Guns killed more than 17 times more people than hammers and are responsible for nearly 70 percent of total murders. There’s a reason you don’t hear about mass hammering sprees.

Yes, assault rifles are used in a tiny fraction of guns crimes, about 2 to 8 percent, but petty crime was never the main target of the Assault Weapon Ban. Rather, it's designed to stop mass shootings, where rifles are vastly overrepresented. Rifles or assault rifles were used to kill John F. Kennedy and Martin Luther King, and were deployed in the the Beltway sniper attacks, the Columbine massacre, the Aurora movie theater attack, the Oregon shooting in December, the Sandy Hook spree and countless other massacres.

In other recent mass shootings, like the one that targeted former congresswoman Gabrielle Giffords and the Virginia Tech shooting, the killer used handguns outfitted with high-capacity magazines, which were also prohibited in the Assault Weapon Ban. In fact, if the rifle and magazine ban are separated, the magazine ban is probably more helpful than the rifle ban.

When Australia banned assault weapons in 1996, which included measures to take them off the street, gun-related homicide plummeted by 59 percent and there wasn’t a single mass shooting in the decade that followed. Importantly, and in contradiction of gun-friendly talking points, there was no corresponding increase in non-firearm-related homicides.

In other words, people don’t pick up hammers to kill each other when they can’t get guns. But if all the empirical evidence is against you, and there are zero credible arguments  left to make on your side, pretending that hammers are more dangerous than guns probably seems like a good idea.