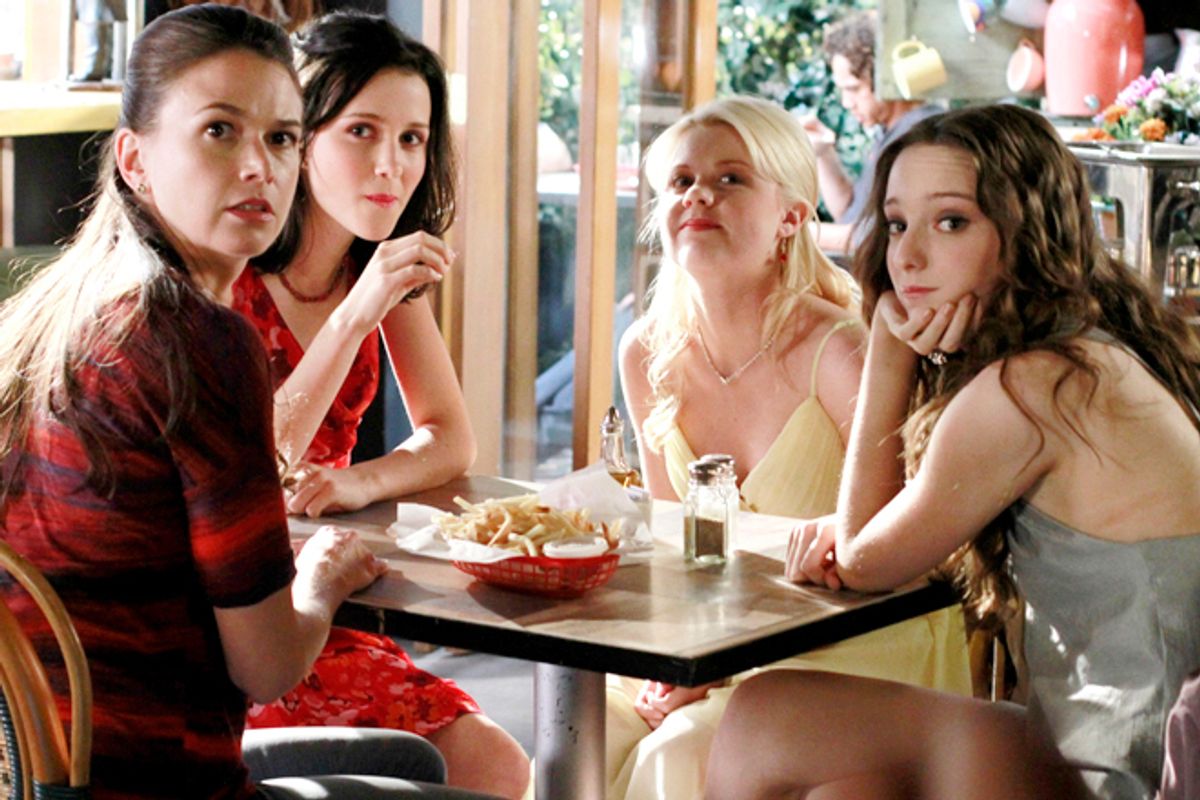 “Bunheads,” the strangest, most flawed show I am totally head-over-heels for, returns for the second half of its first season tonight on ABC Family. As if to pat us all on the head for waiting patiently, it contains an extended scene of a terrible, depressing, Nevada-based magic show, an Auto-Tune-the-news-style viral video about a mass-macing incident, and a scene that takes place inside a cardboard box that has been wired for electricity and remodeled to look almost exactly like Madam Fanny’s kitchen, except a little smaller. Also, it made me cry. Welcome back, “Bunheads.” Missed u!

When we last left “Bunheads,” Michelle (Sutton Foster) was being run out of town, having accidentally maced a roomful of children just trying to put on a production of "The Nutcracker." Since the show is called “Bunheads,” and not “Caustic and Lonely Middle Aged Woman With Great Legs Tries to Survive in the Las Vegas Area,” the first episode picks up a few months later, at the end of summer vacation, and deftly locates Michelle — now working as a magician’s assistant and living on a friend’s couch, eating all her hummus — and conspires to bring her back to Paradise, Calif., and her bunheads. (For those keeping score, over the summer, Ginny — aka the bunhead who looks like a mini-Megan Hilty — has emerged as the best actress of the bunch, by many grand jetés.)

The premiere encapsulates for me all that is great about “Bunheads.” (The second episode, a tedious, circuitous slog through really, truly nothing encapsulates all that is infuriating. In that episode, Michelle talks a lot about a looming blind date and then goes on it off-camera, which is one way to go about storytelling.) Amid a huge amount of delightful blathering, rambling, arcane pop culture references and a whole bit where Michelle will, inexplicably, not stop giving her friend a hard time about dating an older guy, there is also a great economy of feeling. Emotional arcs it would take other shows entire episodes to pull off, “Bunheads” crams into four or five scenes, leaving 20 other scenes for the purely unnecessary and fanciful, like putting Fanny’s kitchen inside a cardboard box

In those four or so scenes, it is guttingly established just how much the women in “Bunheads” need each other: Madam Fanny cannot connect with the girls without Michelle, beyond curtailing their consumption of fried foods. Without Michelle, the girls have no ballet and no adult to open up to.  And without Fanny and the girls, Michelle is revealed to be a true sad-sack and headcase, seriously developmentally delayed when it comes to forming lasting relationships, living on a couch and being a pill about it. Michelle may be played by Sutton Foster but her damage is not adorable, it is deep, and it falls to Fanny and Sasha, not exactly bastions of warmth and kindness, to demonstrate to her how loving people is actually done, something they will have to do more than once this season, I presume. “Bunheads” never soft-peddles just how laborious it is to become an emotionally functional adult, it just pads it out with the cutesy and the twee, the wacky and weird.