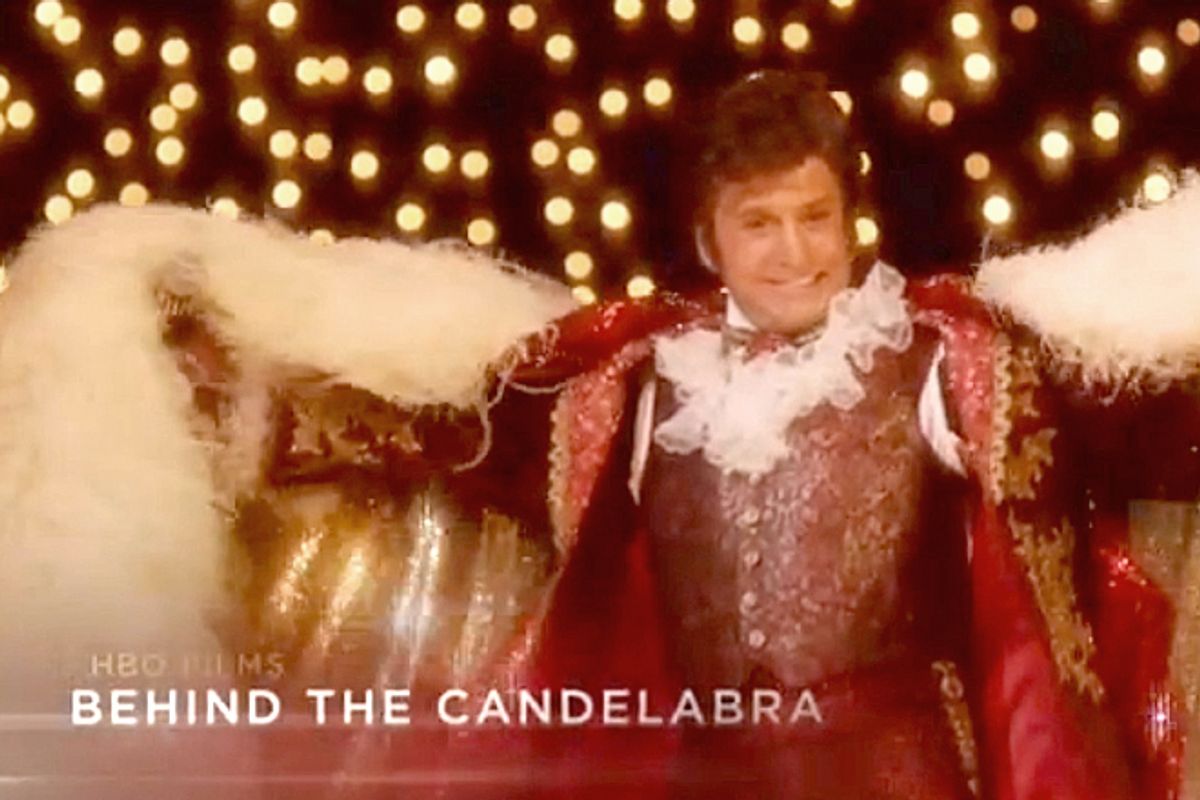 This is everything that's ridiculous about Hollywood in a single sentence. You can put together an acclaimed, hit-making director and two A-list, Oscar-winning actors, promise a low budget and an intriguing subject matter, and have the whole industry run away. The whole liberal, diversity-loving industry. Because, as director Steven Soderbergh explains, "They said it was too gay."

Too gay. That's the reason that Michael Douglas and Matt Damon's "Behind the Candelabra" biopic about Liberace is coming to HBO instead of a theater this year. Because in 2013, apparently the entertainment industry believes we can still only watch stories about homosexuals in the privacy of our homes. Soderbergh told the Wrap, "Nobody would make it. We went to everybody in town. We needed $5 million. Nobody would do it. They said it was too gay. Everybody. This was after 'Brokeback Mountain,' by the way. Which is not as funny as this movie. I was stunned. It made no sense to any of us." Maybe he could have gotten green-lighted with a movie about a gay star who died of AIDS that was just a little bit gay?

It's been eight years since Ang Lee's "Brokeback Mountain" became what was supposed to be a game-changing hit. The tragic, gay-themed drama didn't cause any major outbreaks of protest or collective hand-wringing when it opened. The cast and creative team garnered enthusiastic critical praise and awards, and it was a solid box-office hit. And in the intervening years, television has become increasingly, confidently representative of the LGBT community. Emmy-winning shows, ranging from "Glee" to "Modern Family" to "Downton Abbey," feature gay characters and story lines. There have been gay characters in everything from sci-fi "("Torchwood") to reality ("The Real L Word") to competition ("Dancing With the Stars"). Elsewhere, the macho, traditionally homophobic world of professional sports has thrown itself front and center into the cause of marriage equality. Hip-hop had a star write about his love affair with another man, and gave him the greatest year of his career.

And yet the movies remain dauntingly, stubbornly straight. Now and then, the occasional prestige picture like "Milk," "A Single Man" or "The Kids Are All Right" comes along, an art-house hit for the grown-ups. Sometimes there's a sighting of an outrageous queen character, like "Bruno," or the tough-girl lesbian, like Ester Dean's in "Pitch Perfect," or the teasing, is-he-or-isn't-he? villain, like Javier Bardem's Silva in "Skyfall." That's a pittance. And the fact that Salon declared the more realistic, and little-seen 2012 drama "Keep the Lights On" a "breakthrough" and, a year earlier, called "Weekend" "a major step forward for gay-oriented cinema" tells you just how far the movies still have to go.

One look at the top-grossing films of the past year will tell you that the movies are a great place if you're an 11-year-old boy, not so much if you're a grown-up of any orientation. So I guess we should be grateful that "Paranorman" at least offered one of the few gay characters of the year, in an expectations-busting twist.

Getting a movie with no superheroes or explosions or computer animation made at all is an increasing challenge for filmmakers. But it's telling – and dismaying and revealing of a whole lot about Hollywood's vast underestimation of what America can handle – that the Liberace movie wasn't universally rejected because the subject matter was too obscure or showbiz insidery: It wasn't about the script or the stars. It was too gay. Too gay for an industry that is full of gay men and women. Too gay for audiences who read Andrew Solomon's books and listen to Rufus Wainwright and watch "Happy Endings."

Maybe "Behind the Candelabra" was too gay for some future ticket buyer who'd prefer to see the next installment of the "Transformers" franchise, but otherwise, really? How much longer do we have to wait until a homosexual in a movie isn't considered a breakthrough? How much longer before Hollywood doesn't have to quantify the acceptable level of gayness a film can have? And in an industry that relies so much on special effects, how much longer until movie studios pull off the impressive one of making homosexual men and women truly visible?