John Brennan: The nominee who should be controversial

Chuck Hagel's getting flak but we should debate the CIA nominee, a veteran of Bush-era torture policies 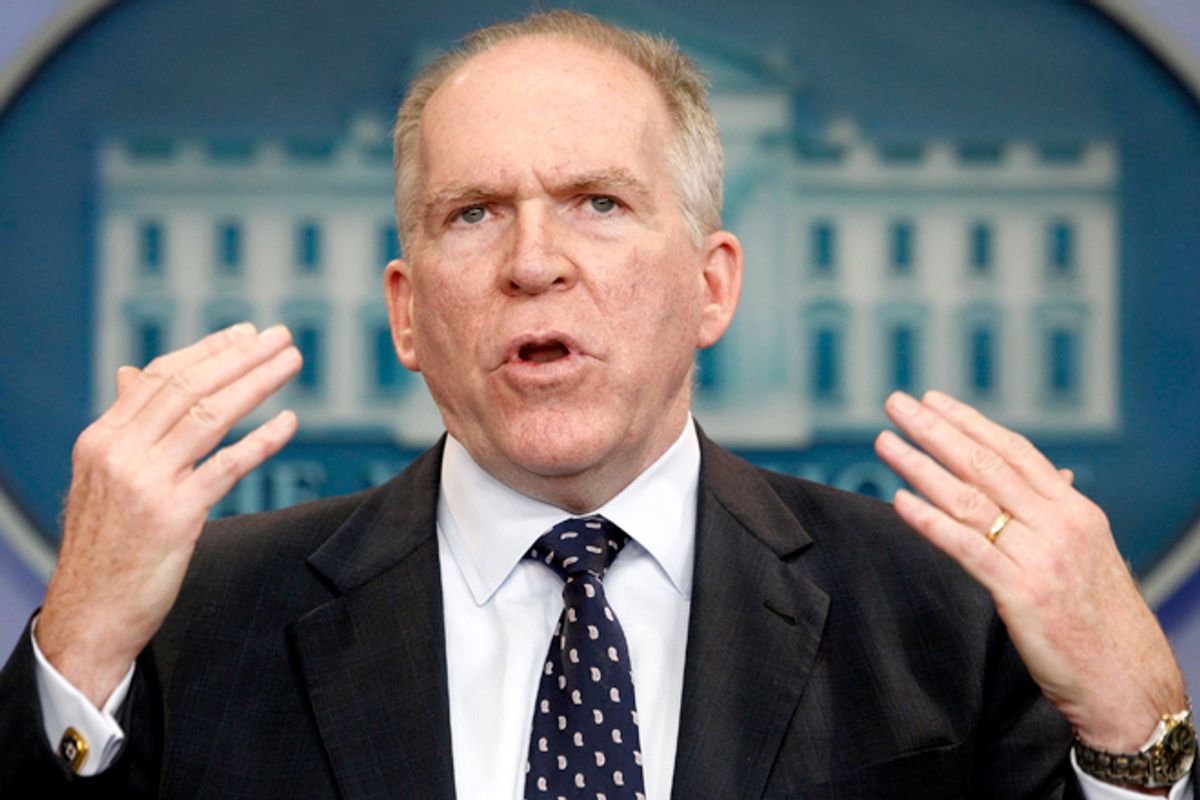 If you want to see what’s wrong with our foreign policy debate, look no further than the two appointments President Obama will announce later today. Specifically, look at the patently absurd controversy surrounding former Nebraska Republican Sen. Chuck Hagel’s pending appointment as secretary of defense, and the complete lack of controversy surrounding John Brennan’s looming ascension to the head of the Central Intelligence Agency.

Hagel has come under withering criticism for allegedly being hostile to Israel or even an “anti-Semite.” Much has already been written about this, but the evidence to support the attacks is exceedingly thin (he once used the phrase “Jewish Lobby” and has since apologized for it) and the charges are little more than a partisan smear job. But the fact that Republican senators have a real (if small) shot at killing the nomination of a fellow Republican senator over Israel shows how difficult it is to have any kind of serious discussion about Middle East policy. Hawkish Republican Sen. Lindsey Graham yesterday called Hagel “out of the mainstream” and “an in-your-face nomination of the president to all of us who are supportive of Israel.”

Meanwhile, no one on the left or the right seems to much care about Brennan’s nomination, despite the fact that he was forced to withdraw his name from consideration from the very same job in 2008 thanks to controversy over his alleged involvement with Bush-era interrogation programs. Brennan spent years at the CIA and served as chief of staff to former director George Tenet during the creation of the post-9/11 detention and interrogation programs. The New Yorker’s Jane Mayer described him as a "supporter" of the programs, which included torture and the use of secret prison “black sites.”

“There are some really important concerns that need to be publicly addressed before the Senate moves forward with the nomination,” said Laura Murphy, the ACLU's Washington legislative office director, in an interview with Salon. The ACLU doesn’t take positions on nominees for executive branch jobs, but Murphy said Brennan’s appointment is “troubling,” adding, “We definitely are concerned.”

In his November 2008 letter bowing out of contention for the CIA job, Brennan claimed he opposed “coercive interrogation tactics, including waterboarding,” and even said he was denied two promotions by the Bush White House over those beliefs. “If that letter is true, then say it on the record,” Murphy countered. Advocates hope more information will come to light in the Senate confirmation hearings. “I don’t know how you serve as chief of staff and not know, and somehow not do more than voice your concerns internally if you really think the agency has gone morally and legally astray," she added.

“There just is such a large range of problematic programs that we think are harmful to civil liberties that he’s touched. And he should be asked to account for his role,” Murphy explained.

In his current job, for example, Brennan has spearheaded some of Obama’s most controversial national security tactics, such as the aggressive escalation of drone strikes and so-called signature strikes, where targets are hit based on incomplete intelligence. He’s also caught flak for claiming drone attacks didn’t result in a “single” civilian death in Pakistan one year and for initially (and erroneously) claiming that Osama Bin Laden "engaged in a firefight" with Navy SEALs during the 2011 raid in which he was killed.

In 2008, liberals and civil libertarians were outraged by the possibility of Brennan heading the CIA. “Appointing Brennan to the CIA does not mean a change from Bush. That was absolutely a critical part of Obama's message. With Brennan, we get the taint of a Bush and two-facedness of a Clinton,” Andrew Sullivan, then at the Atlantic, wrote at the time.

Four years later, civil liberties have largely disappeared from the range of issues liberals care about. Two weeks ago, the Senate quietly reauthorized the Foreign Intelligence Surveillance Amendment Act -- which codifies warrantless wiretapping and email snooping -- with little debate and no amendments.

Glenn Greenwald, one of the most vociferous opponents of Brennan in 2008, summed up the resignation many liberals apparently feel today about civil liberties: “Although I actively opposed Brennan's CIA nomination in 2008, I can't quite muster the energy or commitment to do so now. Indeed, the very idea that someone should be disqualified from service in the Obama administration because of involvement in and support for extremist Bush terrorism policies seems quaint and obsolete, given the great continuity between Bush and Obama on these issues.”

Obama is marginally better than Bush on these issues, and liberals trust a Democrat in the White House more than a Republican, but the change is likely also a product of the fact that the new way of doing things, in this era of warrantless wiretapping, has become routine. Like taking off your shoes at a TSA checkpoint, we don’t really think about it anymore and just sort of accept it.

Brennan and Hagel are both qualified for the jobs and will probably make it through the confirmation process, but the tale of the two nominations should at least serve as a rare moment to debate these important issues that are otherwise ignored.