Meet the Nate Silvers of the Oscar race 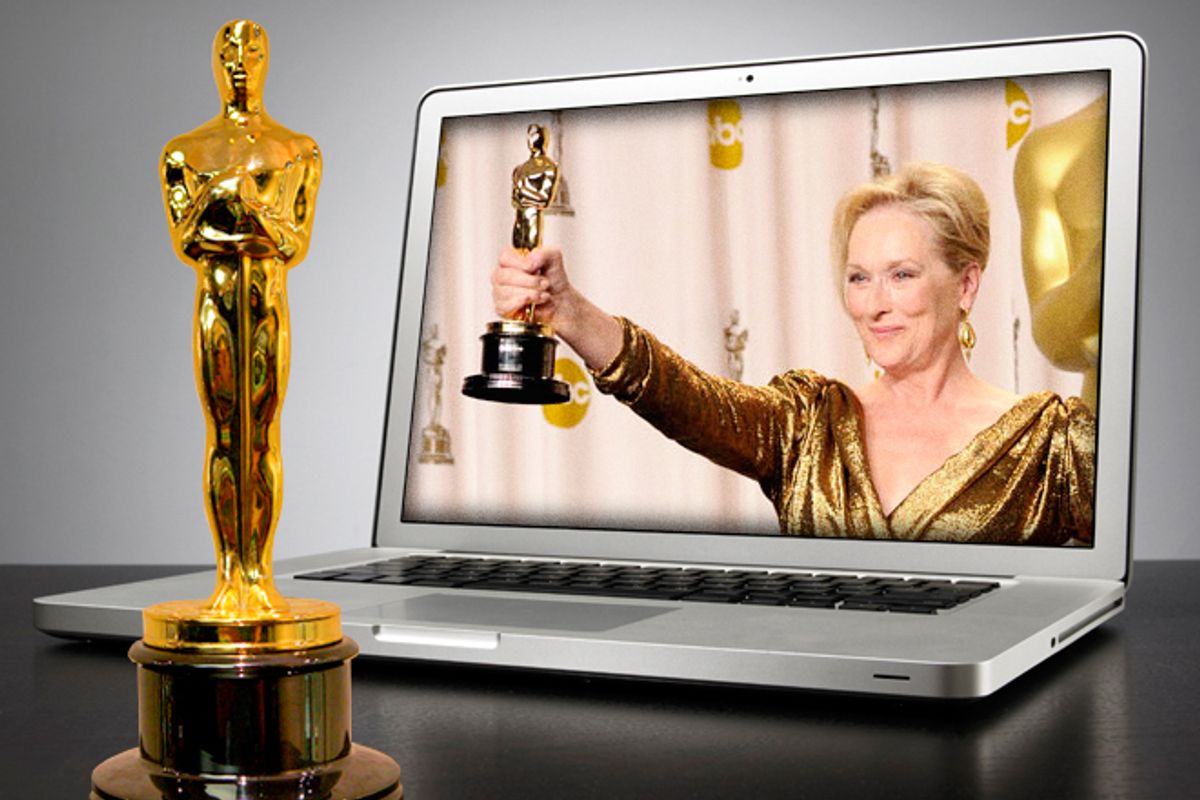 Casual awards-season fans may be debating over whether Anne Hathaway is a lock for her performance in "Les Miserables," or whether a dark horse like "Moonrise Kingdom" can sneak into the best picture race. But among Oscar bloggers, the debate’s already about next year.

“I’ve written out a list of films that are almost certainly going to be best picture nominees” in January 2014, said Jeff Wells, blogger for Hollywood Elsewhere, where he prognosticates about everything pertinent to Oscar season. He’s among a coterie of bloggers who track every change in a race that, this year, has been unusually volatile.

Oscar prognostication and reporting online is hardly a new phenomenon — the zeitgeist-tracking website Gold Derby went online in 2000, and media reporter David Carr was in the game for a while at the New York Times’ Carpetbagger blog. Other grandees include Kris Tapley at Hitfix, Dave Karger at ticket-sales site Fandango’s new editorial arm, and Mark Harris at Grantland. (Harris is taking the season off to avoid a conflict of interest, as his husband, Tony Kushner, wrote the screenplay for "Lincoln.")

But this year, with a volatile field of potential best pictures including a presidential biopic perceived by some as deathly boring, a Middle Eastern action film that is alleged to glorify torture, and a musical featuring the dubious vocal stylings of Russell Crowe, has provided much to talk about ever since Labor Day, which Wells estimates as the official start of Oscar season.

The far-out speculation is just for fun — insofar as anything about the practice is “fun,” strictly defined. The Academy Awards ceremony is alternately thrilling and drudgery, just like the practice of daily blogging. “Now that everyone’s writing about the Oscars, they need content,” said Sasha Stone of Awards Daily, “and what better way to get content than controversy or hysteria? I used to think it’s only since we created these blogs that this madness is going on.”

That madness includes Movie City News' Gurus O’ Gold horse-race rankings, which has been tracking who is in the lead to win best picture since September, when we thought the Coen brothers’ new movie might come out this year. ("Lincoln" is currently leading.) It also includes the raging controversy over the torture scenes in "Zero Dark Thirty," a debate that has taken up many precious days in the Oscar campaign (and a discussion that we have had over the past month here at Salon) and may have permanently turned some academy voters against the film. “I’ve never seen anything like the 'Zero Dark Thirty' thing,” said Stone. “It really was a pile-on!” And it’s evidence of how high the passions run this time of year. Wells noted: “The idea that a film can’t be ambiguous — that’s as disgusting an idea as I ever heard in my life. It’s one of the lowest attack campaigns I’ve ever seen.”

Both Stone and Wells speculated that the controversy had originated organically, rather than having been planted by publicists — it was the natural story to write about when one has to post every day. “This is gonna sound judgmental,” said Nathaniel Rogers of Oscar-predicting site the Film Experience, “but people get bored of talking about certain things, and that ends up creating a story that isn’t a story. Anything that opens early, after a couple months it’s no longer a new toy.”

Not that publicists don’t have sway. “They try to place the Oscar bloggers in front of a movie first, to get their take on it and make them feel special,” said Stone. (The first screening of "Les Miserables" wasn’t for long-lead fashion magazine editors and socialites — its attendees included Oscar bloggers Tapley and Karger, both of whom tweeted shortly after that Anne Hathaway could win an Oscar.) And when the  blogger doesn’t like the movie the publicist has promoted? “Your friend is betrayed. Are they going to prevent you from seeing their [next] movie?” said Stone. “It’s something mainstream journalists didn’t have to deal with, and it led to Variety and the Hollywood Reporter having the blandest coverage around.”

“The constrictions that used to be put on trade reporters for the two main trades were that they had to be reportorial, dispassionate; what’s liberating is our personal voices,” said Wells.

Oscar bloggers, whose take can be saltier and more vociferous than established print organs — no institutional necessity to pretend you didn’t like the movie to preserve access! — have also been eating the Hollywood trades’ lunch, as the old papers no longer have exclusive claim on lucrative “For Your Consideration” ads. (As I write, Wells’ site features ads for "The Intouchables" and "Django Unchained," both from the Weinstein Co.; Stone’s has a jam-packed right rail with ads for movies from Disney, Weinstein and Paramount, among others.) Oscars coverage justifies itself.

And with screener DVDs, screening invitations, and the opportunity of celebrity access (Nicole Kidman was on the cover of Vanity Fair to promote her sure-thing bid for "The Hours," but to get a long-shot nomination for "The Paperboy," she’s been calling Oscar bloggers like Rogers on the phone), it’s a thriving industry, if one Rogers calls “an echo chamber.”

The predictions for Thursday’s Oscar nominations haven’t been finalized — at least not for Stone and Rogers, both of whom are waiting for the Directors Guild of America to announce its nominees. “How we win that war is by being the rightest,” said Stone, who said she hasn’t been able to watch the movie "Milk" ever since she failed to predict Sean Penn’s Oscar win. “Whoever’s the rightest is the most powerful.”

Wells takes a lighter view of the process, though he recently tweeted that the inevitability of "Lincoln" winning best picture (he’s not a fan; Stone is) is a “sickening, soul-stifling bummer.” “Most people are not that thrilled with what happens at the Oscars, but they like the argument. That’s the fun part. The blood is up. That’s what makes it fun. Then everybody goes to sleep March 1.”

For his part, Rogers is focused on waiting to see who will be nominated before predicting who will win on Feb. 24. “It seems like the obsessiveness and bipolarness of constantly trying to see what will happen in two months and changing your mind every five seconds ... I want to be like Tiffany [Jennifer Lawrence’s character] in 'Silver Linings Playbook' and say ‘Calm down, crazy!’”