Michelle Rhee to actually be held accountable by press for once 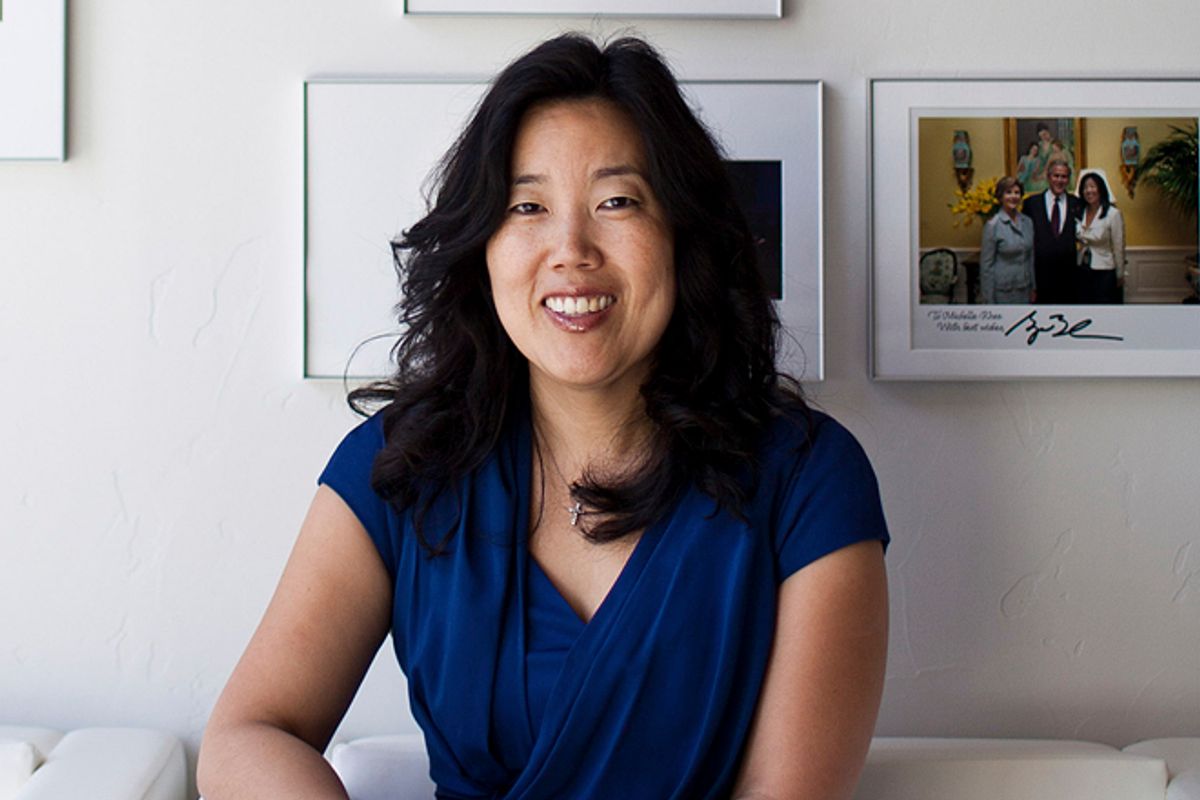 Michelle Rhee is the subject of tonight's "Frontline" on PBS. Considering that Rhee, the former head of Washington, D.C.'s schools, is one of the most deified figures in contemporary American politics, you'd be forgiven for predicting another gauzy follow-up to "Waiting for Superman," the pro-"education reform" propaganda picture that made Rhee a national figure. But this interview with the episode's lead reporter, John Merrow (via Dana Goldstein), suggests a much more critical take than Rhee is used to. Because unlike so many other outlets, "Frontline" is going to report on all the cheating.

3. Do you think the documentary will change anyone’s opinion of Rhee?

I don’t think people know how strongly she resisted the investigation of the erasures. That might give some people pause. In Atlanta, the lead investigator told me that they considered three or more standard deviations from the norm to be a strong indication that cheating took place. In the district, there were classrooms that were five, six, seven deviations from the norm. That’s staggering. This is of course the evidence that was presented to Michelle Rhee.

The question, then, is whether any of this will change Rhee's relationship with the press as a whole. "Education reform," an unfortunately loaded term, is one of those things, like deficit reduction, that is considered so self-evidently right and good that it's pretty much OK for "objective" mainstream political press types to support it, and Rhee, as the most visible face of the movement, and its most prominent martyr (she was ousted in Washington by "the special interests," which in this case means the actual voting parents of Washington, D.C.), is rarely subject to hostile questioning on TV or in other press appearances. When StudentsFirst, her education reform advocacy and lobbying group, released its "report cards" grading each state's school systems based on how many of Rhee's policies the state had agreed to adopt, news organizations across the country reported on the findings as if they came from an objective think tank and not an ideological group pushing a set of controversial policies. (According to StudentsFirst, Republican-controlled Louisiana has the most pro-student laws in the nation, while many states with actually high-performing schools end up near the bottom of the rankings because they coddle their teachers a bit too much.) The line on the top of the Orlando Sentinel blog post is illuminating: "Update: Criticism from American Federal of Teachers added to post." Edited to add "on the other hand," in other words.

As a "longtime Democrat," Rhee also gets glowing press for working with Republicans -- though lately she's been working much, much more with Republicans, often very conservative Republicans, than Democrats. As Daniel Denvir wrote in Salon last November, Rhee's organization worked to get nearly 100 Republicans elected to state office across the country this last year, while spending a small fortune on campaigns against collective bargaining rights for public employees. Many of the top Democrats working for Rhee's StudentsFirst have now left the organization, which also recently hired former Americans Elect CEO (and longtime Republican) Kahlil Byrd as president.

But there is one fact that is seldom expressed clearly in stories about the education reformers, and that is that wherever they have implemented their agendas, they have largely failed to improve schools, even by their own entirely test-based metrics. New York's famed improvements under Bloomberg have been largely illusory, and Rhee's D.C. schools weren't just beset by cheating, they were no better when she left them than they were before her campaign of mass firings and intimidation. If tonight's "Frontline" tarnishes Rhee's golden reputation, state governments across the country might look upon some of her goals and claims a little more skeptically in the future. (Well, besides the Republicans, who are thrilled to have bipartisan cover to divert public education money to the private sector.)