My love is "Justified" 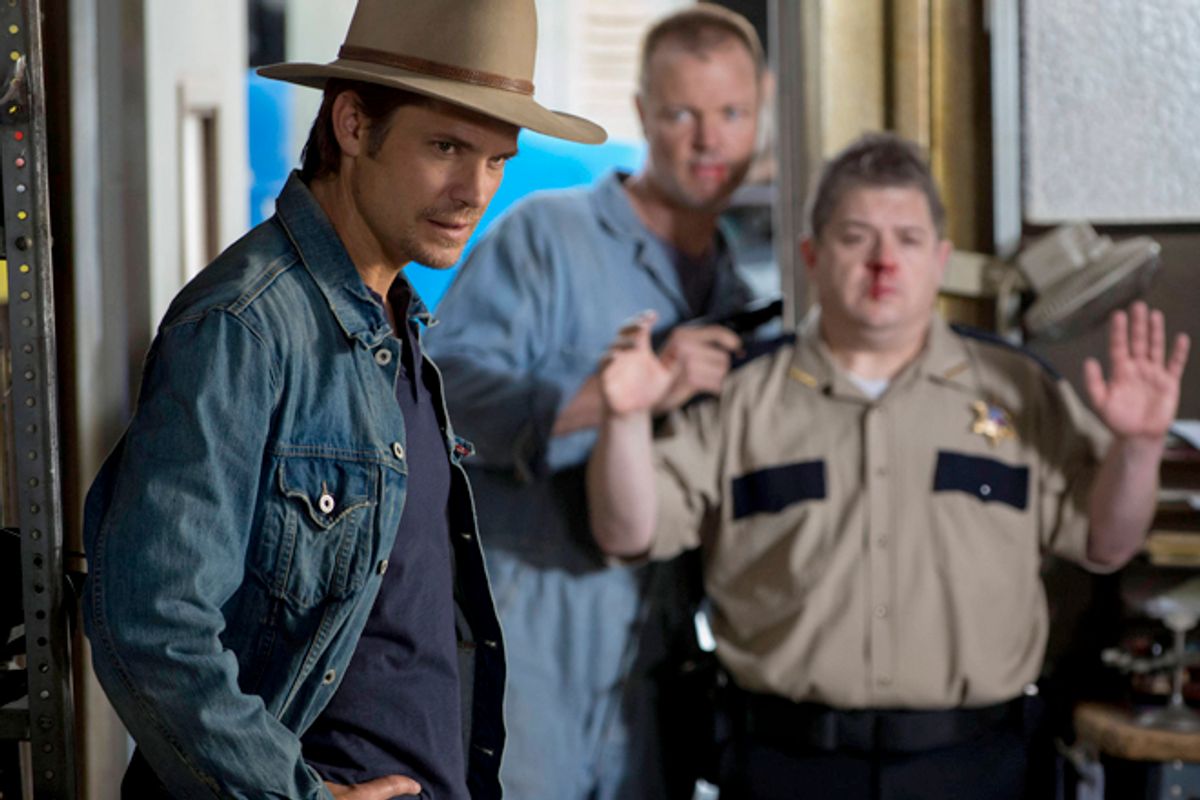 Let’s talk teeth. The often truly great, almost always truly enjoyable, only occasionally cartoonish FX show “Justified,” which begins its fourth season tonight, chronicles the pursuits of trigger-happy, white-hat-wearing U.S. Marshal Raylan Givens (Timothy Olyphant), his colleagues, the various perps he tracks down, and, most important, the charismatic gun-toting, lawbreaking residents of Givens’ place of birth, Harlan County, Ky., Appalachia central. All of these characters, not just the federal employees, but the lowlife hillbillies, drug addicts, prostitutes and general impoverished ne’er-do-wells who don’t look like they make it to the shower on a regular basis, let alone the dentist, have perfect, glistening, Hollywood-installed chompers. Boyd Crowther (Walton Goggins), “Justified’s” second lead, and the dreamiest bad guy on television, has a pair of (much-remarked-upon) pearly whites that should preclude him from pulling off heists in the dark, but most certainly do not.

I point out the teeth, which could all be found on any tooth-professional's wall-of-big-smiles fame, not to crap on “Justified’s” verisimilitude, but to suggest that for a very good show, “Justified” has a uniquely functional relationship to verisimilitude — just enough to keep things fun. (It also takes a real joy in appearances: It is the most shame-free, equal-opportunity-ogling show currently on TV. There is a looker for every gender, and you are encouraged to look.)  “Justified” is a serious drama, but it is not a self-serious one.

“Justified” checks all the boxes on the “serious drama” scorecard. It stars a hero with an antiheroic bent (Raylan Givens doesn’t want to shoot all these people, but he just keeps getting plopped into situations where he must. His body count is laughably high. Certainly his colleagues laugh about it pretty regularly) as well as a pure antihero in Goggins’ almost distractingly riveting Crowther, a skinhead turned evangelical turned bad guy-with-a-conscience turned bad-guy-without-a-conscience-but-still-with-intelligence. (Boyd Crowther is definitely the guy with a swastika tattoo on his bicep I have hated least in my life.)  It has an extremely specific, rich, complicated backwoods Kentucky setting and in its second season put on a master class in paying off a long-term story arc in an emotionally and dramatically satisfying manner (cheers to you, Mags Bennett).

“Justified” also consistently checks all the boxes on the procedural scorecard, and for my money, what “Justified” does better than any show on TV other than some episodes of “The Good Wife” is be a procedural, an extraordinarily concise, savvy and hilarious one at that. “Justified” has excised many of the more predictable beats of the crime-solving show from its repertoire and updated the form. You will never see Raylan Givens waiting for a warrant or interrogating a suspect in a holding cell. On “Justified,” interviews happen on the road. Instead of warrants there is leverage — and bullets. Last season's longer arc, which ended with a cleaving Quentin Tarantino would dig, was broad and zany: When "Justified" does procedural, broad and zany are part of the charm.

In the new season, “Justified” takes a purely procedural setup — the episode begins with a skydiver carrying cocaine falling to his death 30 years ago, a death that has been featured in “CSI” and “Bones” — and turns it into a long-term story arc, a season-long mystery that will presumably get less goofy than it first appears, as it involves Raylan’s criminal papa Arlo and guest star Patton Oswalt. Meanwhile, Boyd and his crew (I'm saving all my thoughts on Ava Crowder [Joelle Carter], who is the type of antiheroine someone should be making a TV show about this very instant, for another exegesis)  are mucking around in more well-trod “Justified” territory, tangling with the Dixie mafia and scoping out a grass-roots religious revival movement that may be dampening drug sales.

In the first two episodes, the procedural and serious drama aspects of “Justified,” which usually blend together as nicely as the ingredients in Mags' apple cider, jostle up against each other in jarring ways. (Goggins’ performance as Crowder is so charismatic, it almost unbalances the series), but I am optimistic the parts will come together. “Justified” has always done right by both its procedural satisfactions and big time payoffs. Like its leading men, Raylan and Boyd, it understands and revels in the crasser virtues of showmanship, of the right joke, the right threat, the right plaid shirt and tie combination, the right number of buttons to do up on a collared shirt, the right way to brandish a gun and, of course, the right hat.