The Krims show the world what healing looks like

Two months after their children were murdered, the couple reaches out to offer solace and inspiration to others 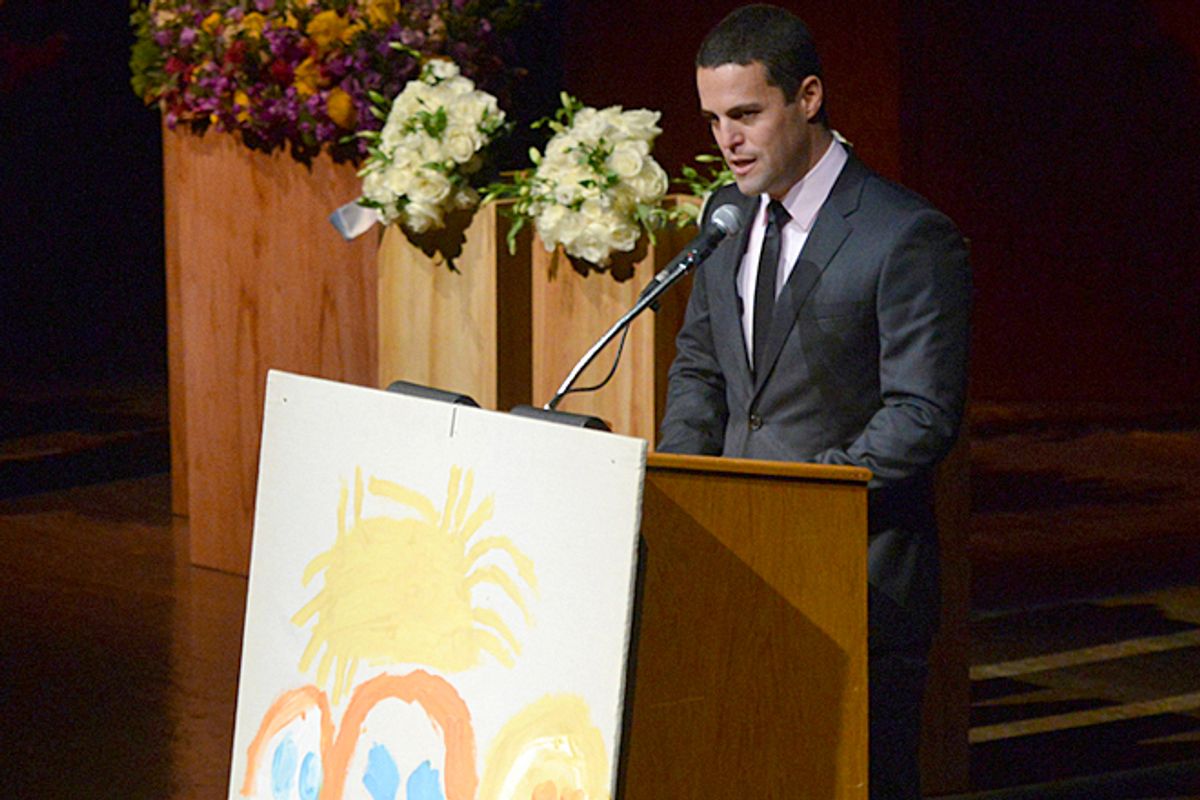 Kevin Krim speaking at the Celebration of the Lives of Lulu & Leo Krim Memorial Service, Nov. 5, 2012
--

After losing two of their three children last October, allegedly at the hands of their nanny, Yoselyn Ortega, the Krim family would have been entirely justified in retreating from the public eye to bear their grief alone. Especially after suffering the subsequent indignity of being judged and criticized by an army of trolls for living on the Upper West Side and employing a Dominican nanny. But then, that's not the kind of people Kevin and Marina Krim are. Instead, they've turned the worst thing imaginable in any parent's life into an opportunity to honor the memories of their children, and to provide strength and inspiration to others. They're showing the world what healing looks like. They're demonstrating, in the words of their reverend, the most profound "emotional generosity."

Just days after the October murders of 6-year-old Lucia and 2-year-old Leo, the Krims went into action, launching the Lulu & Leo Fund to "honor our children" by raising money for children's arts and science programs. But the real work of the organization reaches far beyond fundraising.

In the Fund's early days, the Krims were relatively quiet, posting images of their much-missed children and their exuberant artwork on their Facebook page. But in recent weeks, spurred perhaps by the passage of time and the loss of even more young lives at Sandy Hook Elementary, the Krims have been speaking out more. Just two days after the Newtown shooting, they wrote, "Our hearts especially go out to all the families who have lost their children in an act of unspeakable violence. As parents who are dealing with loss and grief, we understand how much these children will be missed every minute of every day."

The Krims were adept communicators long before their tragedy. Kevin is an executive at CNBC. And Marina Krim, a part-time art teacher, had kept a blog of her parenting "Life With the Little Krim Kids,"  a journal that's now all but unbearable to read today, with its innocent photos and posts about birthday parties and "precious hours" spent with family.

Now, instead of talking about pumpkin patches and playdates, Marina and her husband are writing of their new life. On Dec. 28, Kevin wished his surviving daughter, Nessie, a happy 4th birthday, saying, "She saves us every day." And, along with a video of their music teacher performing the song "Daughter" at his children's memorial, he added his belief that "Lulu and Leo are very happy to be inspiring and teaching people." In the past week, the Krims have been even more communicative, sharing their adventures on a cross-country RV trip with friends from Los Angeles to New York. Saying that they "are hoping to experience some inspiring moments that will help us with our healing and rebuilding," they've posted photos of a sunset, and a trip to an art gallery that "we are sure Lulu and Leo would have loved."

The Krims have suffered an incalculable loss. The same parents who speak wistfully now of the weddings and 16thbirthdays they'd envisioned have to build a new life. That they've chosen to share some of that new life, that they're able to give to others from a place of profound loss, is an extraordinary testament to their family, and an act of deepest tribute to their children. In the wake of fresher deaths like the ones at Newtown, it's also a gift of compassion to others.

In a December post, Kevin shared a video of their friend Reverend Jon Kitto, speaking at the children's memorial service. And he included Kitto's reply to his question of "how someone with his faith would try to understand this horrific violence." The answer that Kitto gave is the one that Kevin Krim — who's suffered the cruelest, most unjust and inexplicable thing that could happen to any father — shares with the world. "The concept of a God that rights all wrongs and makes all things well is not one that I know," Kitto wrote. "The concept of the God I know is one that lives within you and me. It is the capacity to feel love and give love … You must continue to love. You must continue to be loved. It is your love-bound obligation not to let your capacity for love wither, but to hold up what you gained and let the love that you have had flourish." It's the challenge that the Krims are meeting with grace and hope. And it's proof of the enduring impact that two small lives can make in the world.