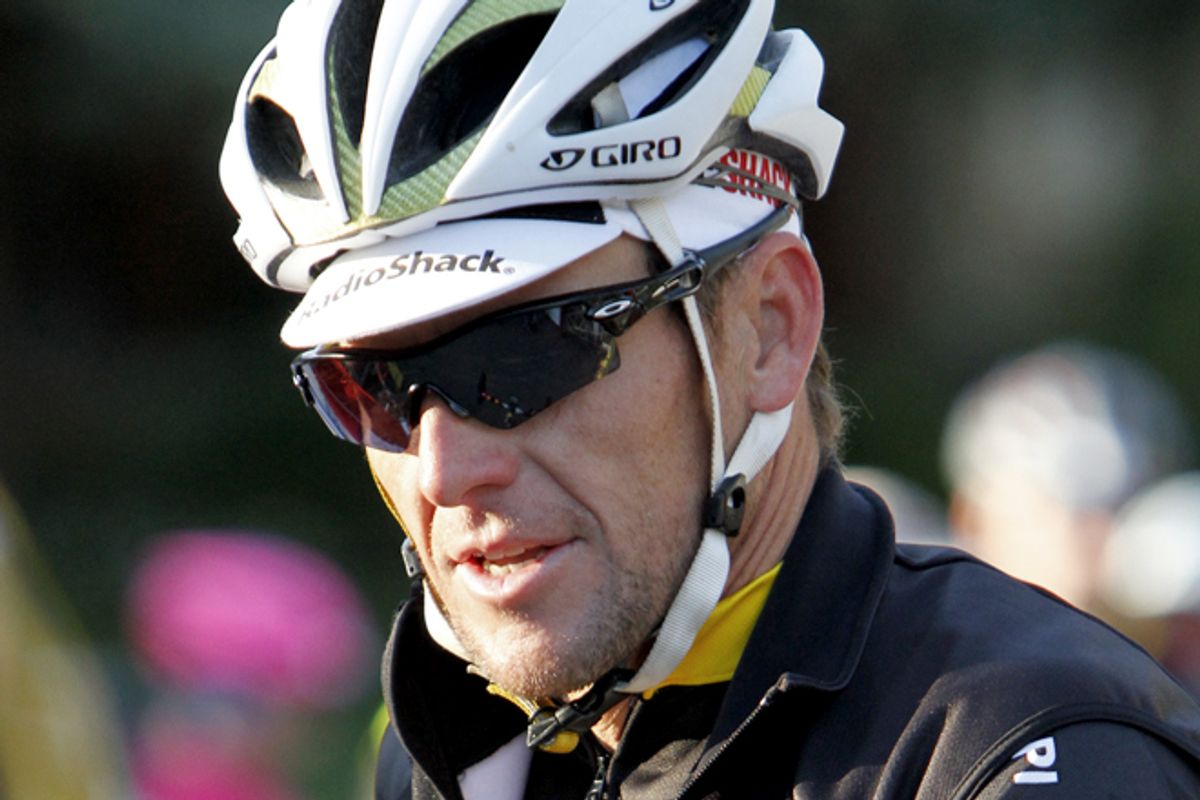 Oh, this is going to be good. Lance Armstrong, America's favorite cyclist/cancer survivor/alleged epic doper has revealed he is going to speak the most openly – and at length – he has since being stripped of his seven Tour de France wins and banned from competition last August. If you're watching, you might want to stock up on Gatorade because this is an endurance event – his first interview is going to be 90-minute sit-down with (arm flourish) Opraaaaaaaah Winfreeeeeeeeeey.

On her site, Winfrey and company promise the interview, airing next week, will be "no-holds-barred" — and that "Armstrong will address the alleged doping scandal, years of accusations of cheating, and charges of lying about the use of performance-enhancing drugs throughout his storied cycling career." Last week, the New York Times laid the groundwork for what he might reveal, with the news that "he is considering publicly admitting that he used banned performance-enhancing drugs and blood transfusions during his cycling career." The Times says rumor has it Armstrong is mulling an admission in the hopes of an eventual reinstatement for competition – a career move that the 41-year-old realistically doesn't have a whole lot of time left to make.

It's all clearly a very calculated informational rollout. After the many, many passionate denials of doping that Armstrong issued throughout his career, if there's to be a change in his story, it makes sense he'd do everything he can to control the message. First, there's the well-placed leak from "people familiar with the situation" to the biggest source possible: the Times. Then there's the inevitable lengthy, in-depth interview with a beloved icon. It's a long, cautious road back to public trust.

It's bound to make for fascinating television, not merely because of Armstrong, who just months ago was self-aggrandizingly calling the USADA's process "an unconstitutional witch hunt." What will make it compelling viewing is O herself, a woman who historically does not just sit on the couch and make meaningful nodding gestures. If there's a story, Oprah will inevitably insert herself right into it in her Oprah way.

And Winfrey does not take kindly to prevaricators. Two years ago, she had a veritable field day in a two-part rematch of her 2006 showdown with James Frey – the man whom she made a star when she chose "A Million Little Pieces" for her book club, and whose literary deception the most powerful woman in the media did not appreciate. While the earlier interview, in front of her audience, had simmered with Winfrey's fury at betrayal, the 2011 one, a pretaped one-on-one affair, had the icy chill of her moral superiority. She played with Frey like a cat with its hacked-up hairball, asking him if he believed she'd been fair to him while looking like his jackass opinion couldn't matter less.

So it'll be interesting to see what she does with Armstrong. She can, when she wants to, be a controversial subject's biggest cheerleader — evidenced by her 2009 interview with Whitney Houston, in which she gently summed up the singer's drug abuse as "dimming your own light" and asked, "Did the drugs give you any sense of relief?"

Armstrong hasn't personally humiliated Winfrey like Frey did. But he is also a man who's had to step down from his own cancer organization, a man whose angry, how dare they? self-righteousness over the doping allegations will make him appear the worst kind of hypocrite if he finally tells a different story now. It's been that stubbornness, that defiance, that has made him reviled by many of his former fans now, the sense that if he's guilty of what he's been accused of, he's been so arrogant for so long. Whatever comes next, he will never fully live it down. But he may be making a start toward the best redemption he can hope for — and he'll probably have to squirm under Oprah's scolding eye for it.

Oprah's all about the nurturing and the healing and the finding your spirit, but she's also tough on liars. When Armstrong sits down with her, he'll be facing a woman who has said that "Everything you do and say shows the world who you really are—let it be the truth." We'll see next week whether he does.