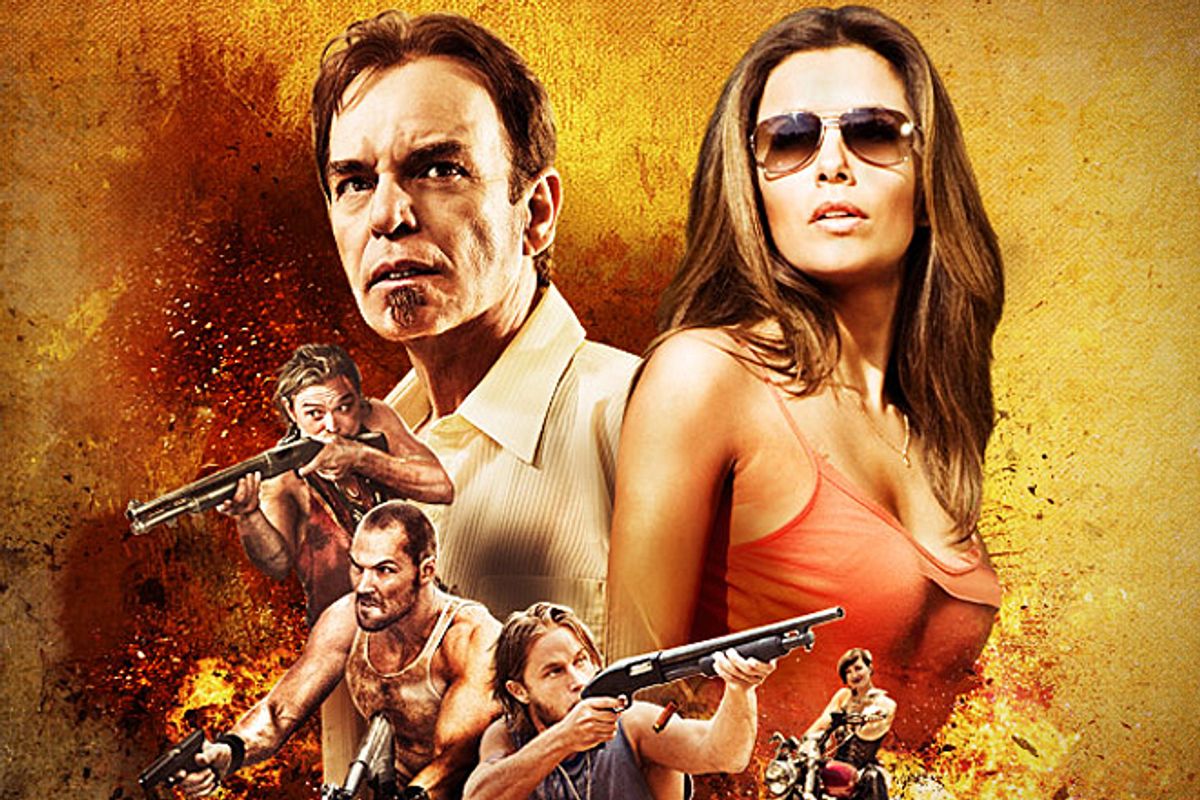 I’m tempted to tell you that, except for its thoroughly repellent racial and sexual politics, the imitation-Tarantino action flick called “The Baytown Outlaws” – which you could be watching on your TV or computer or mobile device right now, instead of “working” – isn’t much worse than “Django Unchained.” But that’s admittedly like saying that, except for that episode in Ford’s Theatre, John Wilkes Booth was one of the cooler Americans of the 19th century.

How’s that for sneaking two Oscar contenders into an article about a January VOD release that will never be nominated for any awards by anybody? In all seriousness, I’m not sure whether to recommend “The Baytown Outlaws” as a guns ‘n’ glory time-waster or warn you off it as a piece of mendacious trash. So I’ll do both. A superficial and stylish redneck-sploitation spree, “Baytown Outlaws” has no real reason to exist beyond the quest for cash. Its appealing B-plus supporting cast, including Billy Bob Thornton, Eva Longoria and Andre Braugher, almost elevate it to the level of mainstream mediocrity – but then again, that was never the goal.

Instead, director and co-writer Barry Battles is after the specific grade of faux-Tarantino-ness represented by “The Boondock Saints,” arguably the first true cult hit of the 21st century. This is like the neo-Confederate version of “Boondock Saints,” mixed with a faint dose of the Coen brothers’ “Raising Arizona.” A trio of unwashed and nearly illiterate Alabama brothers, who are supposedly lovable despite being depraved contract killers and the sons of an infamous Klansman, hit the road in a zany kidnapping plot involving a disabled teenager. Among the numerous people they must kill en route are a gaggle of leather-clad hookers, a Native American biker gang who go around scalping people, and a bunch of heavily armed African-American dudes in an assault vehicle.

Yeah, I’m serious. The main action of this movie involves three über-macho white guys, whose charismatic leader, Brick Oodie (Clayne Crawford), wears a Rebel-flag T-shirt in every scene, driving around the South killing women, blacks and Indians. Mind you, Battles is smart enough to try to soften the psychodrama around the edges: Braugher plays the corrupt African-American sheriff who serves as the brothers’ patron, and their kidnapping errand is conducted at the behest of Celeste (Longoria), the ex-wife of a Latino crime lord. (There’s also an utterly irrelevant tender moment between Brick and a hot illegal immigrant.) But Carlos, said evil Latino crime lord, is played by Billy Bob Thornton, who is partly of American Indian ancestry but not really all that plausible as a Mexican or Cuban or Dominican.

Which leaves us … where, exactly? With a movie that is too campy to be taken seriously, featuring protagonists named Brick, McQueen and Lincoln (a singularly unlikely name for an Alabama Klansman’s son). But also one that’s not nearly enough fun to escape its overriding mood of insidious racist-murder fantasy. Fundamentally, it appeals to the basest impulses of white male viewers, while pretending not to. Braugher and Thornton are both good enough to make me wonder what in hell has happened to those guys – I mean, beyond middle age, career burnout and the perverse currents that govern casting decisions in movies and TV. If the movie were actually about Carlos and the corrupt sheriff, and ditched the redneck idiots, it would be a whole lot better, not to mention less odious. Well, there’s still room for a sequel, and in this kind of movie, nobody’s ever so conclusively dead that you can’t bring them back.

“The Baytown Outlaws” opens this week at Cinema Village in New York, and is currently available on VOD from cable, satellite and online providers.