Why is Congress so dumb? They spend their days hounding donors rather than researching the bills they vote on 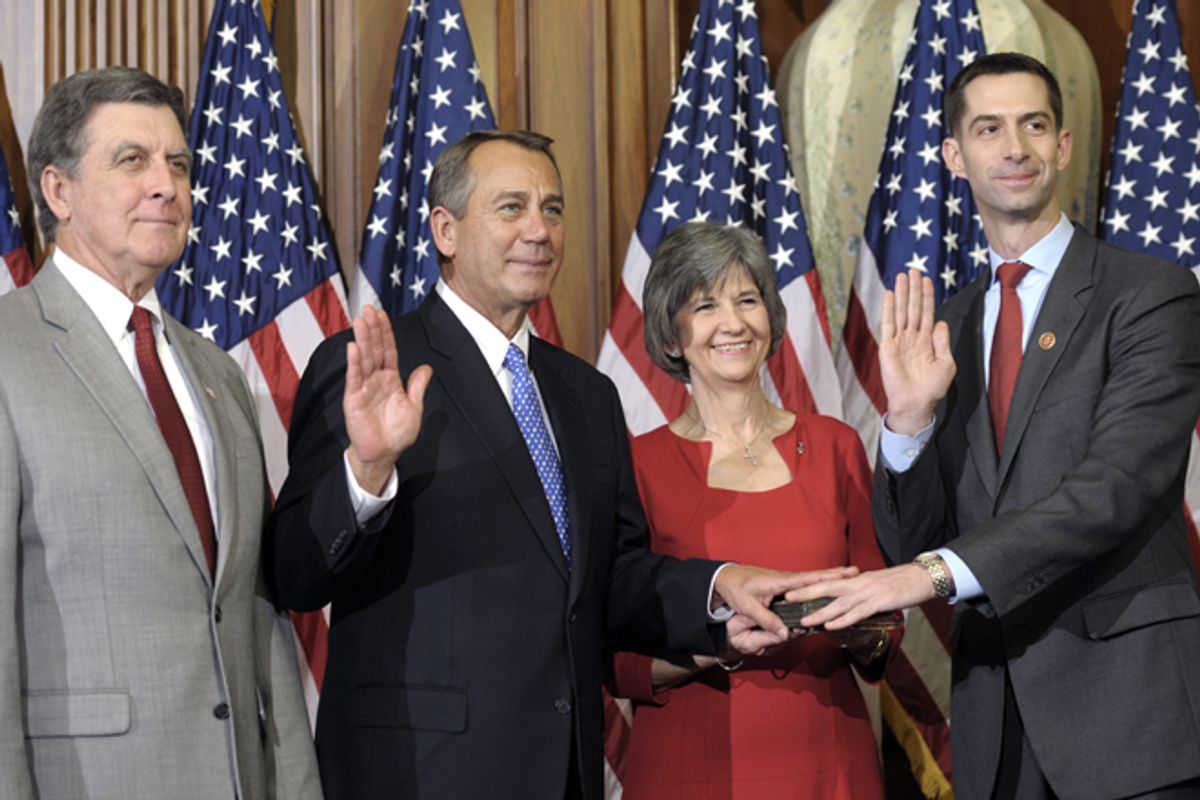 Members of Congress don't know anything about "the issues" and they spend all their time fundraising, according to both a new Huffington Post story and "an easy inference to make after observing Congress for almost any length of time."

The HuffPo's Ryan Grim and Sabrina Siddiqui obtained a PowerPoint presentation given to incoming Democratic freshmen legislators by the Democratic Congressional Campaign Committee, and the DCCC's recommended schedule for House members includes four hours spent on the phone begging rich people for money and one hour spent begging rich person for money in person. This is the daily schedule.

As Kevin Drum notes, this leaves no time for studying or homework. Members rarely know much about anything, policy-wise. An unnamed member confirmed to HuffPo that these guys basically are exactly as ill-informed as you feared:

One member of Congress said that the fundraising takes up so much time that members don't even have time to become experts on bills they sponsor. "One thing that's always been striking to me is even the members playing a leading role on specific issues actually could not talk about the issues," said the member, who didn't want to be quoted by name. "They didn't have enough knowledge on their own issues to talk about them at length. I'm probably guilty of that." He recalled one meeting early in his career, where he brought several members together to try to hash out a compromise, just as he had done earlier as a state legislator.

"Staff members were all twitching at the discussion, because their principals were saying things that were just flat-wrong or uninformed or wondering aloud about what the industry practices really were," he recalled. "The staff members of course had a pretty good idea. ... The members were sitting around the table having a remarkably uninformed and unproductive discussion."

This, as much as anything else, is why our Congress is both dysfunctional -- legislators have no clue what they're voting for or against most of the time -- and so attentive to the priorities of the very wealthy.

Newt Gingrich completely dismantled the internal institutions that used to provide Congress with objective information and research, both because that information frequently contradicted conservative dogma and because he knew that doing so would force Congress to rely on outside (ideological) organizations for information, which would strengthen the corporate-funded policy shops and think tanks that powered the conservative movement. Now nearly everything Congress "knows" about policy comes directly from self-interested, industry-funded groups. Simultaneously, as Lorelei Kelly recently wrote, congressional staff began shrinking, which means expertise was, once again, outsourced -- now, increasingly, lobbyists perform the educational function that well-versed staffers used to.

So: the constituents members of Congress have the most direct contact with, and the ones they see themselves as reliant upon to remain in office, are the ones who have the ability to write massive checks. And the people the members talk to to understand the issues are either think tank ideologues or paid representatives of industry or both.

The result is Congress as it's been since the second Clinton term: Hundreds of dim bulbs, a couple of brilliant-but-evil guys, and a handful of dedicated and intelligent people who frequently do weird and inexplicable things like "voting for the horrible 2005 bankruptcy bill."

The annoying thing is that the solutions to these problems are incredible simple: public financing of elections and huge increases in congressional staff budgets. But you might notice that both of those solutions involve spending more money on the government, making them non-starters in our age of bipartisan agreement that government spending is unseemly.

The alternative to constant fundraising by the members is for outside groups to take care of it for them, which is a model conservatives already sort of practice. In their "Behind the Caucus" column on Rep. Tom Cotton, an Arkansas freshman who will vote against raising the debt ceiling because he explicitly wants the United States to default, Politico's Mike Allen and Jim VandeHei explain that Cotton won his primary because the ultra-conservative Club for Growth simply sent Cotton "a FedEx envelope full of checks that he didn’t ask for." And that certainly saves some time. Allen and VandeHeil also note that Cotton, and his peers, explain why we are probably about to induce a recession for no reason:

Many in the media — us included — often underestimate just how conservative and how impervious to criticism and leadership browbeating these members are when appraising the chances for change in the next two years.

Hey, Mike and Jim, that's what we've been saying for a while now. We're screwed, because the people who spent thousands getting Cotton elected are the ones explaining the issues to him and his dumber peers.