Does Obama have a diversity problem?

He lost the votes of white men, but they're winning top Cabinet picks. Still, the Times distorted his record a bit 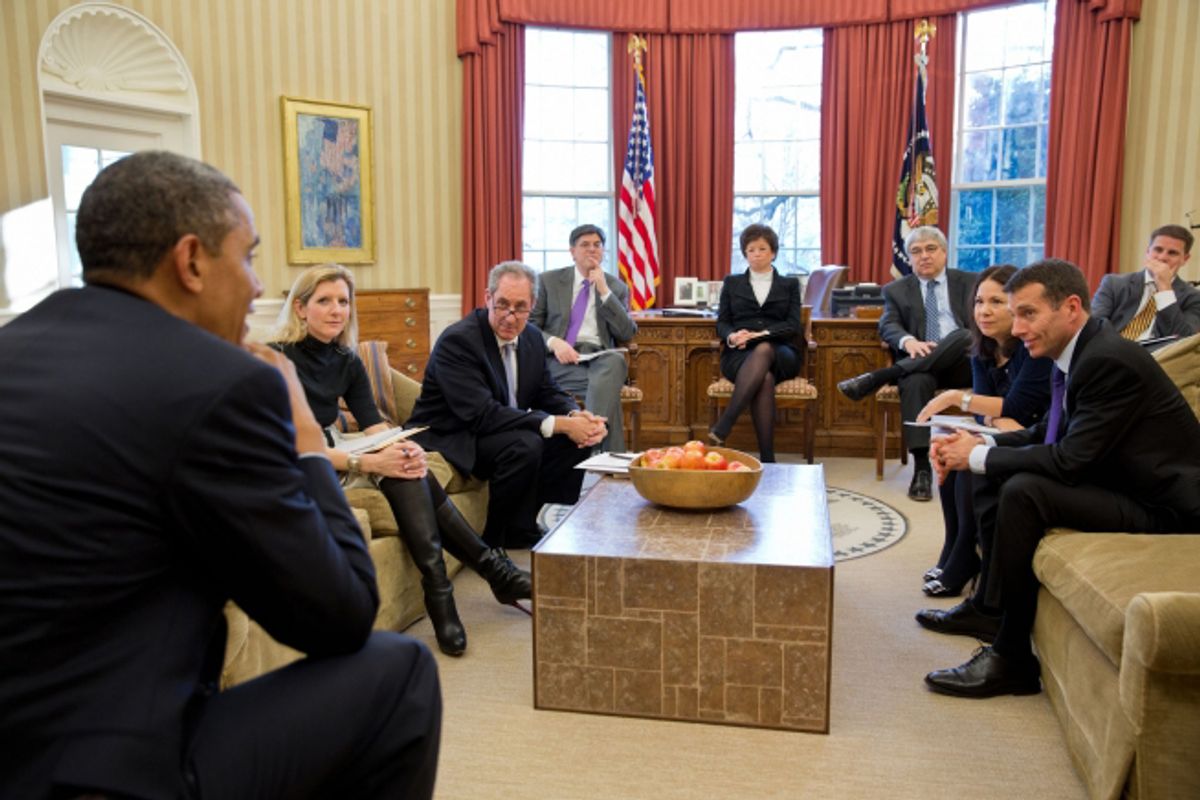 The New York Times turned up the volume on questions about the president's second-term Cabinet diversity with its Wednesday front-page headline: "Obama's Remade Inner Circle Has an All-Male Look, So Far." The real story was the photo that illustrated the piece: The president meeting with his top advisers, and every one of them that we could see was a man, nine of 10 white.

It turns out, if you looked closely, that Valerie Jarrett was actually in the room, but hidden behind a colleague. Sure, that could be a metaphor, but it probably isn't: Jarrett is by all accounts one of the most influential people, if not the most influential, in the president's inner circle.

So by obscuring Jarrett, literally and figuratively, the Times piece and its dramatic presentation immediately overstated Obama's diversity problem – but that doesn't mean there isn't a problem. With the loss of Hillary Clinton, who's being replaced (the president hopes) by Sen. John Kerry, his appointee, there will be no women in the top tier of the Cabinet. Obama has also replaced Treasury Secretary Timothy Geithner with Chief of Staff Jack Lew, and the top candidates for Lew's job are all male. When it comes to federal appointments overall, Obama's done a better job than George W. Bush but about the same as Bill Clinton.

The Times analysis falls short by failing to mention that both of Obama's only two Supreme Court appointments have been women, one of them a Latina, and his judicial appointments overall have been balanced. It also seems churlish to blame Obama for the white maleness of his top Cabinet picks, given the right's takedown of Susan Rice, who was rumored to be his top choice for secretary of state. Had Rice been nominated, there may well have been no story. Yes, there's the question of whether Obama should have fought for her, the way he's going to have to fight for his defense secretary pick Chuck Hagel, but it's hard to make the case that her gender was a factor there. By all accounts Rice is very close to the president, and she could still wind up his national security adviser. (And she is still his U.N. ambassador.)

It's rich when the very forces that made sure we didn't have an African-American woman secretary of state complain that our first black president's Cabinet lacks diversity. But that's what they're doing. On Wednesday Mike Huckabee accused Obama of his own "war on women," decrying the fact that there's "so much testosterone" in his Cabinet and "so little estrogen." But liberals like Margaret Carlson are also slamming the president. In a Bloomberg column headlined "Obama to Romney: Send me your Binders Full of Women,” Carlson complained that "at the rate he is going, Obama is going to have a Cabinet that looks more like the Augusta National Golf Club than America."

The White House hasn't made any formal comment on the Times story, but it seems no accident that its official Wednesday photo of the day, via Twitter, is the one that accompanies this story -- much more mixed than the one that ran on the Times piece, with Jarrett right in the center, across from the president.

It's hard to deny that Obama's second-term Cabinet runs the risk, at least, of being less diverse than his first. With remarkable timing, the same day the Times piece ran, Labor Secretary Hilda Solis announced her departure (although it's easy to imagine she'll be replaced by someone who's not a white man). The administration has lost several other prominent women over the last couple of years, including EPA chief Lisa Jackson and top domestic policy adviser Melody Barnes. Council of Economic Advisers head Christina Romer and Carol Browner of the Office of Energy and Climate Change Policy made earlier exits. Romer and Jackson, at least, were widely perceived as chafing at decisions in their realm that went against their recommendations to the administration. Of course, plenty of men have left the administration's upper tier, too.

This isn't the first round of complaints about whether Obama tends to surround himself with men (apart from the influential Jarrett and, of course, his wife, Michelle). As early as October 2009, the Times' Mark Leibovich found administration women complaining about the "men's club" atmosphere in the White House, where bonding and sometimes decision-making took place on the basketball court or golf course. Although Jarrett denied the friction at the time, a  month later she organized a dinner with Obama and his top women staffers so they could share their concerns.

“There were some issues early on with women feeling as though they hadn’t figured out what their role was going to be on the senior team at the White House,” Jarrett told the Washington Post in 2011. “Most of the women hadn’t worked on the campaign, and so they didn’t have a personal relationship with the president.”

On MSNBC today, Minnesota's Democratic Sen. Amy Klobuchar defended the president, pointing to his high-profile partnership with Hillary Clinton and the fact that "both" of his Supreme Court appointments were women, as well as his policy choices on behalf of women, starting (but not ending) with the Lilly Ledbetter Fair Pay Act. "Obviously I'd like to see some women in there," she told Andrea Mitchell, "but I'm sure we're going to see some women down the line."

Apart from (maybe) Rice, I'm not sure there are a lot of women whose being passed over represents a clear disappointment or missed opportunity, let alone a mistake. (That's not an excuse: It would be nice to see a Democratic president surprise us with some not so obvious choices.) Some people mentioned former Assistant Defense Secretary Michele Flournoy as an alternative to Hagel (but a lot of them were Republicans and neocons like Dan Senor). In the financial sector, there’s the economist Janet Yellen, vice chairman of the San Francisco Federal Reserve. We're almost certain to see another woman as labor secretary, since that spot gave us our first female Cabinet member, FDR's Frances Perkins; former Michigan Gov. Jennifer Granholm is one possibility. Klobuchar herself is mentioned as a candidate to replace Attorney General Eric Holder if he leaves, but Obama would probably have valid reservations about plucking a Democrat from the Senate.

Even if I think the Times piece lacked some context, diversity advocates are right to squawk about the composition of the administration as it's forming. From the start, the president has had to work to make his top team less a men's club, and he's got a lot more work to do in his second term.

I talked about this on MSNBC's "Hardball" with Eugene Robinson and Chris Matthews: