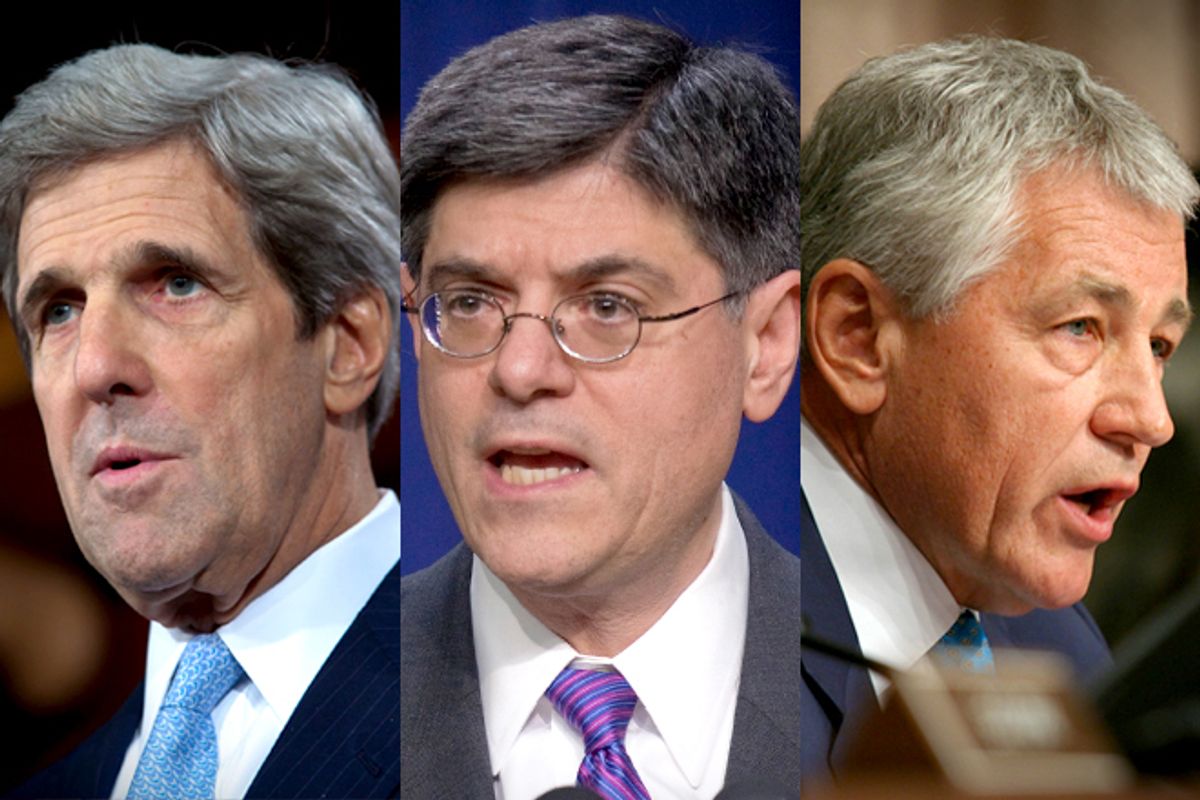 January has brought a wave of Republicans gleefully calling out Democrats for the Obama administration’s maleness and whiteness. They’re hypocrites, still stung by the “war on women” and “binders full of women” and the fact that Herman Cain and Michele Bachmann didn’t constitute a special diversity shield. But even hypocrites can be right sometimes, as a recent New York Times number-crunch backs up.

Diversity in any sense is something that doesn’t really happen unless you try, and if the Obama administration is trying with its top-level appointments, other priorities have clearly trumped it. This doesn’t have to be because of a conspiracy: A lifetime of seeing almost exclusively white men as authority figures has a way of perpetuating itself, and without much self-examination or effort, people tend to go with a certain comfortable framework. (This is true despite the president being a black man; as anyone who has worked for a woman or a person of color who was the first to stake out a spot on hostile turf can tell you, racism and sexism aren’t exclusively white male phenomena.) But it's still a problem that needs to be talked about, over and over again, until something changes.

Unlike Republicans, who have to awkwardly dance around “affirmative action” and the like, Democrats at least nominally accept the logic of why picking the same kind of person who has always ruled things is not a good thing. They certainly accepted it during the campaign season, when they had to turn out women and people of color, who in turn helped them win. They’ve recognized it, rhetorically at least, since the campaign, too. Here they are in their own words: Jay Carney, answering a question about it after Republicans scuttled Susan Rice’s nomination, said, “I think the president has always believed that in order to achieve the highest level of excellence in his Cabinet, and more broadly, in his administration, that diversity is important.” Nancy Pelosi, who has continually made focused efforts on this, from recruiting to committee rank, said, “One of the messages it sends, if you’re a woman, if you’re gay or if you’re a minority, you can have the comfort of saying: ‘Somebody like me has a seat at the table. Somebody who understands my aspirations, my hopes and dreams.’”

And yet the administration has only matched the Clinton administration’s record on diversity, which, given that two decades have passed and more underrepresented people have joined and risen through the ranks, is entirely unimpressive. Yes, the Bush administration was worse, which actually surprised me and goes to show how symbolic representation -- the Condoleezza Rices and Karen Hugheses and Colin Powells -- can fool you into thinking there’s more under the slick surface. But then, while both the Republican National Convention and the Democratic National Convention this year were panoplies onstage, it was crystal clear from attending both that only one had participants to match. And the joyous, blustering diversity at the DNC was the result of actual coalition-building, not just cherry-picking, a verbal commitment of policy as well as representation.

Still, leadership matters, and here we are with this top-level lineup of too-familiar faces. Hillary Clinton is gone, and we don’t have Sheila Bair, Michele Flournoy or Susan Rice (a pretty good selection given that “pipeline problem") and another white man is expected to succeed Jack Lew as chief of staff should be become the treasury secretary. The numbers look even worse now that Hilda Solis, a Latina woman, has resigned as secretary of labor.

So here are some follow-up questions: Will John Kerry carry on the legacy of Hillary Clinton in encouraging female leadership and entrepreneurship around the world? Will Chuck Hagel, if confirmed as secretary of defense, fully and fairly implement the progressive changes in the military the administration supports, including the partial expansion of abortion access for service-members and dependents, despite his past opposition? How independent will Lew be from the Wall Street boys’ club’s values and logic? And how will the administration do better on this stuff next time, if it does indeed care about it?