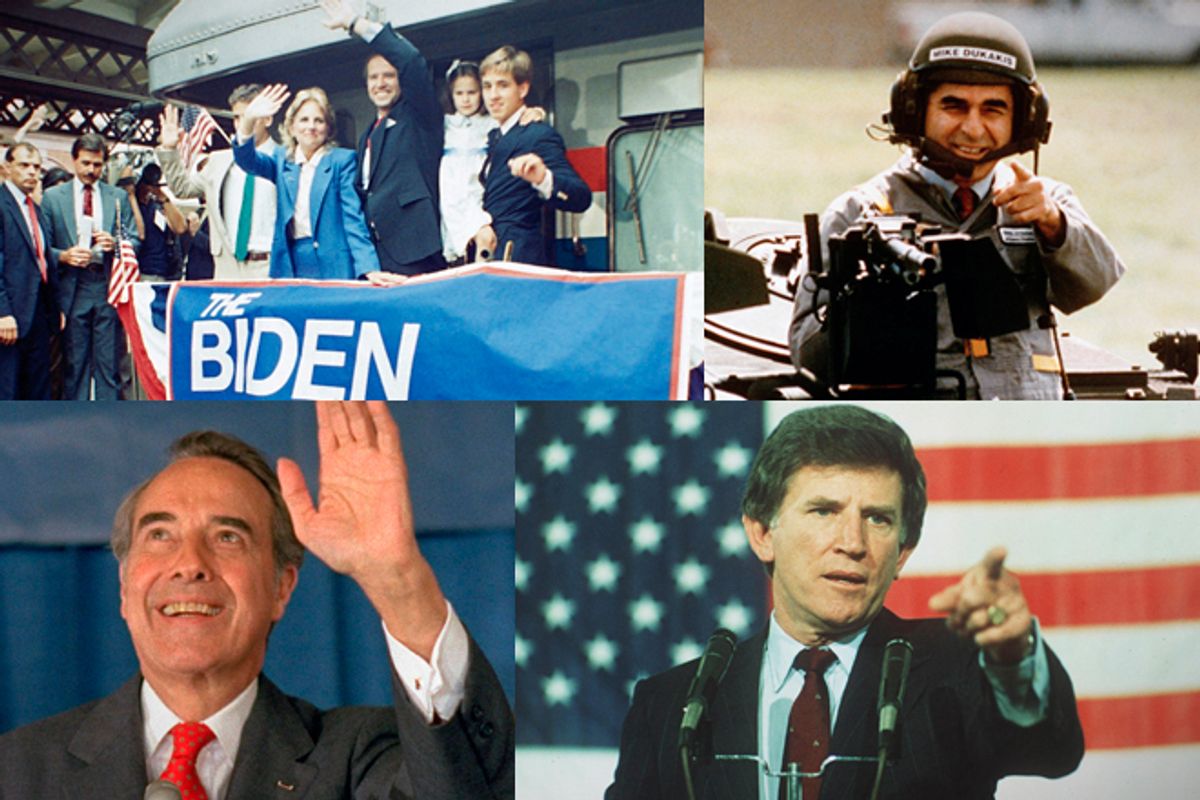 The sad news of Richard Ben Cramer’s death has given the political world an occasion to acknowledge his most ambitious work’s status as the best campaign book ever written. It also prompted one of the principal characters in “What It Takes” to make a startling admission to Salon.

“I'm going to tell you something that I've never told anyone before,” Gary Hart said this afternoon. “I never read the book."

Hart was among the six 1988 presidential candidates Cramer profiled in his book, although that’s a completely inadequate description of what Cramer sought to achieve. For two years, he immersed himself with Robert Caro-ish devotion in the lives of his subjects, hoping to understand who they really were as people, and then spent several more years writing the book. When it was released in 1992, “What It Takes” was greeted with ho-hum reviews and meager sales, but it’s become a cult classic in the years since.

“He spent just an inordinate amount of time in interviews with me, my friends and my family,” Richard Gephardt, who was also featured in the book, told Salon. “He came down to St. Louis countless times. What he was interested in doing, I think, was psychoanalyzing what, in the end, makes someone run for president.

“It was a slant of presidential politics that went well beyond where Teddy White left it off in the 1960s and early 1970s. And that said, it probably hasn’t been done since.”

One of the reasons no one has attempted a similar project is the level of trust between author and subject that it required. Because the incumbent president wasn’t seeking reelection, the ’88 race attracted an unusually large field – at one point or another, 15 candidates actively sought the Democratic and Republican nominations. Many of them are barely mentioned in the book, but those who made the cut allowed Cramer to witness their most vulnerable moments -- key meetings, tense backstage moments, even intimate family conversations.

Gephardt, who began the race as a long shot but ended up winning the Iowa caucuses, said he doesn’t remember exactly how the project first came to his attention or why he agreed to it. But he said he quickly warmed up to the author and came to view him less as a reporter and more as a friend along for the ride.

“He did it well,” Gephardt said. “He didn’t interfere. He knew when to back off. He was a delightful person to be around. He was very funny, very smart. And unlike some writers in the political space, he wasn’t all hung up on politics. He was really interested in the human side of it.

“People on the staff, people in the family, just liked talking to him. Sometimes he’d just ride in the back of the van, telling jokes and stories – not doing interviews.”

Hart said he was “very suspicious” of Cramer’s request at first, but that “people that knew him recommended him, and said he was honest and trustworthy. And I found that he had a great sense of humor – and that goes a long way with me.

“He was pretty clear he wanted access,” Hart said, “but not so much face-to-face time. He just wanted to be around and to be there when the big discussions took place.”

“That was a great part of his methodology. He ingratiated himself in the best sense of the word. He doesn’t push his way into the center, he’s on the fringe, he’s observing, he’s to a degree participating. His style was very rumpled, and almost absent-minded. So you kind of wanted to take care of him.

“He was so gentle and polite to my wife and my kids. My kids liked him an awful lot. And you understand that he’s not doing daily journalism, that he’s not looking for a headline. So as time went on, you just learned to open up to him.”

Nor was Cramer looking to turn his access into a gossipy chronicle of campaign infighting and behind-the-scenes tantrums. That sort of book might have sold better, but he emerged from his project with a genuine fondness for the candidates. In a 1992 C-Span interview, he was asked if the Dick Gephardt he’d gotten to know was different from the Dick Gephardt the rest of the country knew through the media.

“Yes,” Cramer replied. “I think people misjudge all of these fellows. That’s kind of the point of the book. The ordeal through which we put these guys tends to diminish them and demean them.”

Of course, “What It Takes” is nonetheless littered with unforgettable anecdotes – for instance, a fully grown Michael Dukakis chasing his cousin Tiki around with the severed head of a fish. But Cramer included them to help illuminate the candidates as human beings.

Hart recalled how Cramer, who had just returned from a seven-year stint as the Philadelphia Inquirer’s Middle East correspondent, first described the idea to him. “His thesis when he first talked to me was, ‘I was over in the Middle East, and I’d get these reports about the presidential campaign, and I kept asking myself, ‘Why would anyone do this?’ And the more brutal it became, the more the question would bother him.”

The reason he’s never read the book, Hart said, is because the ’88 campaign remains a painful chapter in his own life. Hart, who had narrowly missed out on the 1984 Democratic nomination, began the race as the overwhelming favorite for his party’s nod. But a scandal in early 1987 forced him out of the race, and when he reentered later that year, he failed to recapture the magic. In honor of Cramer’s passing, though, Hart said, “I think I’ll go ahead and read it now.”

There are a few reasons why “What It Takes’” is more popular today than it was when it first came out. One is the endurance of so many of its characters as relevant national figures. George H.W. Bush went on to serve as president, and his son – with whom Cramer struck up a friendship while writing the book – had two terms of his own. Bob Dole was the top Republican in the Senate in the early and mid-‘90s, then ran as the GOP nominee against Bill Clinton (at which point a Dole-only edition of “What It Takes” was released). Gephardt went on to serve as the top Democrat in the House for a decade, ran for president again in 2004 and nearly became John Kerry’s running mate that same year. And, of course, there’s the current vice president, Joe Biden.

Gephardt said there’s more appreciation for what Cramer achieved now because no one else has even attempted to pull off a similar project.

“He did something that nobody has ever done. That’s what made it a classic.”