Was ESPN announcer Brent Musberger being a creep?

The 73-year-old announcer gushed over a QB's beauty queen girlfriend. She wasn't offended, but everyone else was 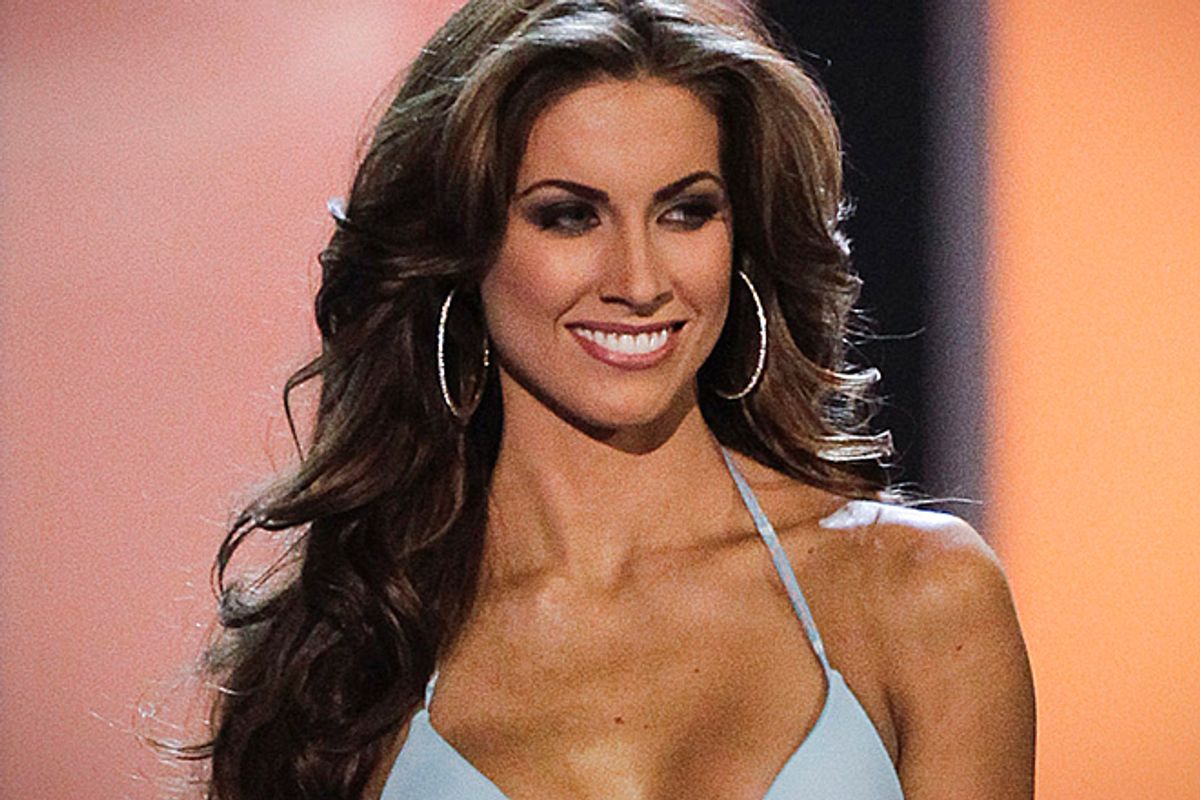 Gosh, she's pretty. So very pretty. I'm sorry, what we were talking about? Oh, right, Katherine Webb, Brent Musberger, football. Hang on a minute. I'm getting lost in those piercing eyes again.

Katherine Webb has that effect on people. On Monday, the 23-year-old 2012 Miss Alabama became an overnight star when the cameras strayed away from the Alabama–Notre Dame game – and her boyfriend, quarterback AJ McCarron. "Do you see that lovely lady over there?" enthused ESPN announcer Brent Musberger, a man five decades years her senior.

"Wow, I'm telling you. You quarterbacks, you get all the good-looking women. What a beautiful woman! Wow! Whoa!" said Musberger, gushing like a guy coming off a juice cleanse in an Outback. "If you're a youngster in Alabama," he added, "start getting the football out and throw it around the backyard with Pop."

With that kind of attention, it didn't take long for the more-radiant-than-the-sun Webb to find a sudden uptick in face and an avalanche of new followers on Twitter. The public was less kind, however, to Musberger and what the Kansas City Star deemed his "creepy," "dirty old man" line of commentary. On Twitter, football fans took issue with his advice to young athletes to "practice hard so you can pull hot chicks," while Deadspin summed it up as "uncomfortable, awkward, heteronormative." And the New York Times quoted journalism professor Sue Carter's assessment that the comments were "a major personal violation, and so retrograde that it’s embarrassing." They also give you a good idea of how very exciting the game itself was.

On Tuesday, ESPN issued an apology, saying, "We always try to capture interesting story lines and the relationship between an Auburn grad who is Miss Alabama and the current Alabama quarterback certainly met that test. However, we apologize that the commentary in this instance went too far and Brent understands that."

But on the "Today" show Wednesday, Webb said no mea culpa was necessary. "I think the media has been really unfair to him. I think if he had said something along the line if we were hot or sexy, I think that would be a little bit different." She added that "The fact that he said we were beautiful and gorgeous, I don't think any woman wouldn't be flattered by that. I appreciate it, but at the same time I don't think I needed an apology."

If you ask me, in a world where women are raped to death and blamed for it by their attackers, Musberger's comments are hardly the biggest deal in the Cause of Womanhood. And the clip from the game is genuinely entertaining, thanks to Miss Alabama's blithely unamused, Blue Steel expression throughout Musberger's slobbery rhapsodizing. That little bit where she gives a bored wave of her spirit pom? I want to make a gif of that for everything I don't give a crap about in life.

But there's a reason the whole kerfuffle touched a nerve. For starters, it once again lumps the world of sports into players and their WAGs – wives and girlfriends – lending credence to the widespread presumption that athletes are men: men who get pretty ladies as their rewards. And that's a real shame, a notion that does no service to either men or women. Because you know what girls who throw the football around with Pop get? They get to go to the Olympics. Not too shabby either, Musberger.

The other problem with Musberger's outburst is something the cornflower-eyed, pouty-lipped Webb herself compounded with her reaction. She is a beauty queen. When someone calls her beautiful, she's doing her job effectively. But not "any" woman would automatically be "flattered" to get a random HEY WHOA LOOK AT HER while she's just sitting watching a football game. Believe it or not, women moving through the world just doing their stuff don't always feel like being judged for their appearance -- even if that judgment is a positive one, thanks. In fact, women aren't always just so grateful to you, random dude, for both your attention and your unsolicited assessment! And while it's absolutely true that a polite, sincere compliment can be a gracious gesture, it's likewise true that sometimes it just comes off as aggressive and weird. It can lead to some hostile and crude stuff very quickly, as many of us have experienced. So just show a little restraint. Maybe wrap it up after the first acknowledgment of how impossibly beautiful she is. That's all we're saying here. Even if she's a goddess incarnate like Katherine Webb.