5 reasons natural gas won't save us 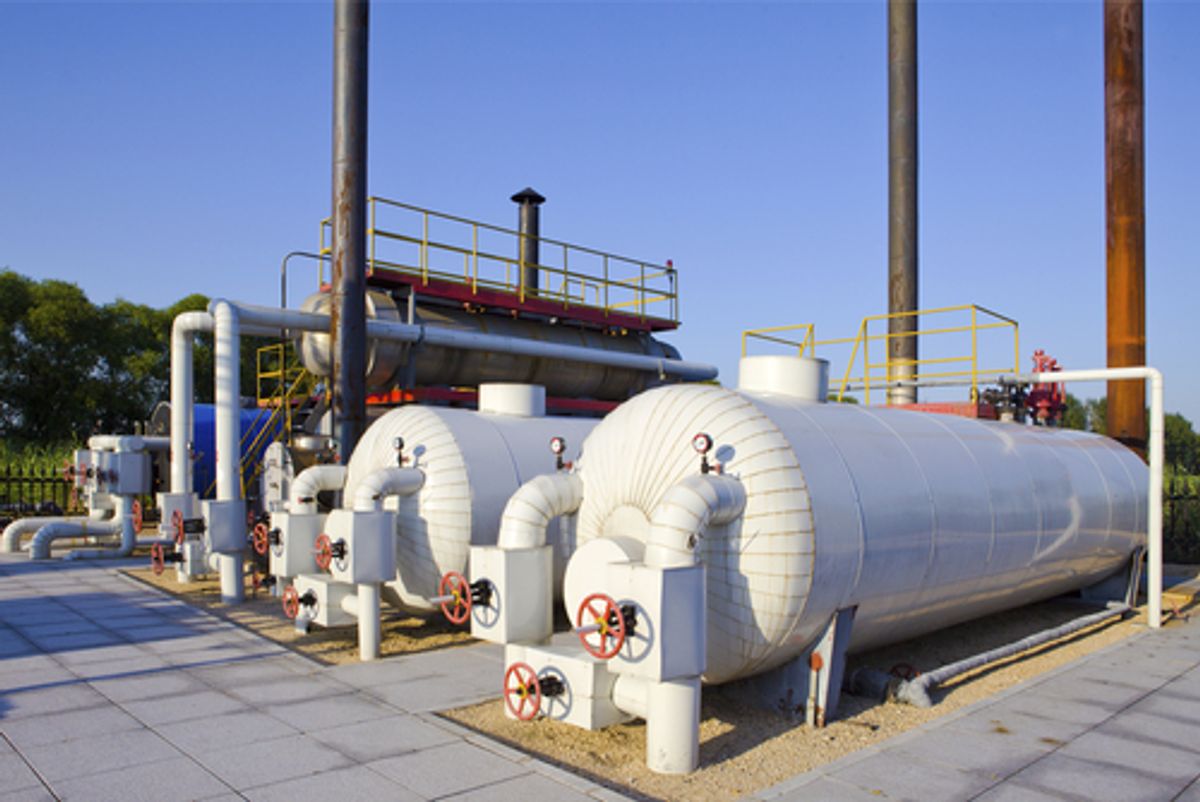 If you’re hoping the natural gas boom means we’ve solved our environmental and economic woes, you’re going to be disappointed. While natural gas produces less nitrogen oxides and carbon dioxide when burned compared to coal or oil, the end product is only part of the story. The natural gas boom in recent years has been fueled by extreme extraction methods like fracking that are posing a new slurry of environmental problems before the gas even makes it to consumers.

If you look at the complete picture of how we extract natural gas today, you begin to realize pretty quickly that we aren’t going to be able to drill our way out of the climate crisis without creating an even bigger mess in the process. The list of impacts from fracking is huge, but here are five to kick off the conversation:

Natural gas may release less pollution when burned, but it still may be a significant contributor to global warming pollution after all because we must take into account what happens during extraction, too. “Scientists are once again reporting alarmingly high methane emissions from an oil and gas field, underscoring questions about the environmental benefits of the boom in natural-gas production that is transforming the US energy system,” writes Jeff Tollefson for Nature. He explains:

The researchers, who hold joint appointments with the National Oceanic and Atmospheric Administration (NOAA) and the University of Colorado in Boulder, first sparked concern in February 2012 with a study suggesting that up to 4% of the methane produced at a field near Denver was escaping into the atmosphere. If methane — a potent greenhouse gas — is leaking from fields across the country at similar rates, it could be offsetting much of the climate benefit of the ongoing shift from coal- to gas-fired plants for electricity generation.

Industry officials and some scientists contested the claim, but at an American Geophysical Union (AGU) meeting in San Francisco, California, last month, the research team reported new Colorado data that support the earlier work, as well as preliminary results from a field study in the Uinta Basin of Utah suggesting even higher rates of methane leakage — an eye-popping 9% of the total production. That figure is nearly double the cumulative loss rates estimated from industry data — which are already higher in Utah than in Colorado.

When it comes to climate change, leaking methane is a big deal. The EPA reports, “Pound for pound, the comparative impact of CH4 [methane] on climate change is over 20 times greater than CO2 over a 100-year period.

Methane released during fracking doesn’t just end up in the air, but also in the water. By now you’ve likely already seen the videos of people living near gas drilling operations who can light their water on fire as it comes out of the tap. (If you haven’t then it’s time to see “Gasland.”) In 2011 the United States Geological Survey released a report about water in Pavillion, Wyoming where residents complained about water quality after drilling. Here’s what they found:

EPA’s analysis of samples taken from the Agency’s deep monitoring wells in the aquifer indicates detection of synthetic chemicals, like glycols and alcohols consistent with gas production and hydraulic fracturing fluids, benzene concentrations well above Safe Drinking Water Act standards and high methane levels. Given the area’s complex geology and the proximity of drinking water wells to ground water contamination, EPA is concerned about the movement of contaminants within the aquifer and the safety of drinking water wells over time.

Other studies have show the same, including one published in the Proceedings of the National Academy of Sciences.  Abrahm Lustgarten writes for ProPublica:

The research was conducted by four scientists at Duke University. They found that levels of flammable methane gas in drinking water wells increased to dangerous levels when those water supplies were close to natural gas wells. They also found that the type of gas detected at high levels in the water was the same type of gas that energy companies were extracting from thousands of feet underground, strongly implying that the gas may be seeping underground through natural or manmade faults and fractures, or coming from cracks in the well structure itself.

And that’s just the methane. Frack fluid that is injected into the wells contains a toxic soup of hundreds of chemicals, including carcinogens and volatile organic compounds like benzene, toluene, ethylbenzene and xylene. Companies aren’t required to disclose what chemicals they’re using either — so it makes it difficult to test for leaks and spills, and for people to be treated for health problems that may arise from exposure.

Oh yeah, and fracking is exempt from the Safe Drinking Water Act — thanks Dick Cheney!

Fracking is water intensive. It can take anywhere from 2 million to 13 million gallons of water to frack a single well and more water is needed to drill the well. Additionally wells are often fracked multiple times, some times as many as 18 times. Where does all that water come from? The Pacific Institute reports:

Water for hydraulic fracturing is typically withdrawn from one location or watershed over several days. Additionally, in some cases, the water is taken from “remote, often environmentally sensitive headwater areas” (Beauduy 2011, 34), where even small withdrawals can have a significant impact on the flow regime. As a result, while fracking may account for a small fraction of a state’s or even a basin’s water supply, there can be more severe local impacts.

Additionally, much of the water injected underground is either not recovered or is unfit for further use once it is returned to the surface, usually requiring disposal in an underground injection well. This water use represents a “consumptive” use if it is not available for subsequent use within the basin from which it was extracted. In some cases, water is treated and reused for subsequent fracking jobs, although this is still fairly uncommon, and no national estimate on the prevalence of this practice is available.

Already states like Texas and Pennsylvania have run into conflicts with fracking due to water shortages. And things are likely to get worse, as the Pacific Institute states, “In many basins, the application of fracking is still in its infancy and continued development could dramatically increase future water requirements and further intensify conflicts with other uses.”

How does all the water water and chemicals get to drilling sites? Trucks, trucks and more trucks. In Pennsylvania it was estimated that drilling and fracking a single well can result in 1,000 truck trips. For residents in rural areas, this means a constant stream of trucks barreling along small roads, some unpaved. Residents have complained of pollution from idling diesel trucks, roads that aren’t big enough for the vehicles, dust pollution on unpaved roads, and excessive wear and tear on bridges and pavement. The results have been accidents galore and big bills for taxpayers.

A surge in hydraulic fracturing to get gas and oil trapped in rock means drillers need to haul hundreds of truckloads of sand, water and equipment for a single well. Drilling that added jobs and tax revenue for many states also has increased traffic on roads too flimsy to handle the 80,000-pound (36,300 kilogram) trucks that serve well sites.

The resulting road damage will cost tens of millions of dollars to fix and is catching officials from Pennsylvania to Texas off guard. Measures to ensure that roads are repaired don’t capture the full cost of damage, potentially leaving taxpayers with the bill, according to Lynne Irwin, director of Cornell University’s local roads program in Ithaca, New York.

So much for the economic boom that fracking was suppose to create for small towns. The road repairs are just the start. In one of the most heavily drilled counties in the Marcellus Shale, a hospital CEO in Pennsylvania is now blaming the gas drilling industry for an operating loss. The AP reported:

Jersey Shore Hospital president and CEO Carey Plummer told the Sun-Gazette of Williamsport that many subcontractors attracted to the area’s Marcellus Shale drilling boom do not cover employees.

That has brought a growing number of uninsured people to the community-owned, nonprofit hospital, Plummer said.

“We had a loss,” Plummer said. “I don’t think it’s a sign of the economy. I think it’s the influx of the gas, industry and those who lack insurance.”

Homeowners may also stand to lose. The Huffington Post reported, “Nationwide Mutual Insurance Co. has become the first major insurance company to say it won't cover damage related to a gas drilling process that blasts chemical-laden water deep into the ground.” The company released a memo that said:

While the fracking industry promises to create jobs, those like Tish O’Dell, co-founder of the Cleveland-area group Mothers Against Drilling in Our Neighborhoods, wonder about what jobs will be lost from impacts to farming, tourism and dairies. She told Midwest Energy News, “If you were going to do a really serious study you would look at these things,” she said. “If water is contaminated and fish die, what are the fishermen going to do? If you have parks where people go for peace and quiet, what happens when you turn it into an industrial landscape? If you have an organic dairy and the soil is polluted, what does that mean? These are all valid questions.”