Pick of the week: Lost love amid aging music legends 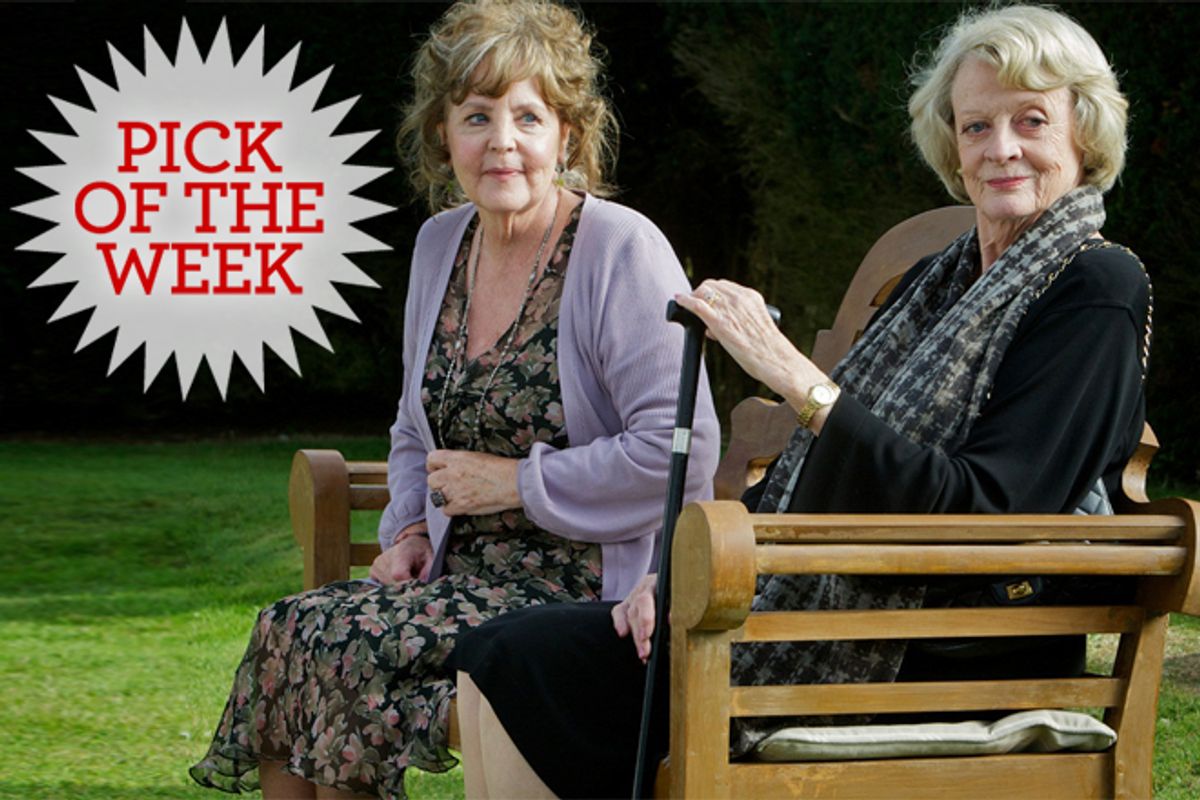 Once upon a time, when Dustin Hoffman was not just a major movie star but also seemed like the on-screen voice of a rebellious generation, it would have been big news if he’d directed a film. At age 75, the two-time Oscar winner is nobody’s idea of a rebel anymore, and he probably seems like a mysterious figure to younger moviegoers – that guy from “Meet the Fockers,” who long ago was in some movies important to their parents. As if to lower the stakes even further, Hoffman’s official directing debut arrives in a supremely English film made for the BBC – an actorly film based on a play, a film rooted in an appreciation of opera and classical music, and a film (I hardly need to say this part) that’s mostly by and about and for older people.

If that sounds like I’m getting ready to damn Hoffman’s “Quartet” with faint praise, I’m really not. This is a lovely film directed with delicacy and taste, profoundly alive to the rhythms of its actors and characters, which gives its superlative British cast of stage and screen legends the time and space they deserve. If you want to talk marketing, I think Hoffman is right on time: The unexpected summertime success of “The Best Exotic Marigold Hotel” demonstrated once again that there’s a significant audience of seniors who will show up in large numbers for the right movie, and also that a surprising number of younger viewers will come along. And Michael Haneke’s riveting “Amour,” which tackles similar issues of aging, mortality and dementia in an admittedly darker vein, has just been nominated for multiple Oscars.

Adapted by Ronald Harwood from his own 1999 play, “Quartet” is almost like a lighter palate-cleanser to “Amour,” and can likewise be construed as a loving tribute to the cultured classes of the postwar generation as they pass into history. But at Beecham House, a retirement home for musicians in the English countryside, they aren’t dead yet, or at least not the flinty and fearsome Jean Horton (Maggie Smith), who was once a great diva of the operatic stage and retains both her pride and her vanity. Jean’s arrival has thrown Beecham House into an uproar, not least because a beloved resident, Reggie Paget (Tom Courtenay), was once her onstage partner and also, very briefly, her husband.

Smith is the undoubted star of “Quartet,” playing a woman of tremendous steel and fortitude who now must confront both her own physical frailty and the consequences of long-ago misdeeds. And Scottish comedian Billy Connolly nearly steals the show as Wilf Bond, another retired singer who plans to face the end of days with his wisecracking, ladies’-man bonhomie intact. (Connolly is a uniquely British phenomenon who has never translated to Americans; this seriously may be his most winning film performance.) But I was charmed, seduced and finally brought to tears by the calm and sad performance of Courtenay (once the star of “Billy Liar,” “The Dresser” and numerous TV adaptations of Dickens) as a man whose hopes for a “dignified senility” have been overturned by the apparition of his lost love and all the suppressed but not-quite-dead emotions that arrive along with her.

I suppose “Quartet” is about a great truth of life that we all learn if we live long enough, which is that while advancing age may offer a certain perspective on events, it does not protect us from doing all the foolish, headstrong and impossible things for which young people are justly famous. (As my mother, who is precisely in the “Quartet” demographic, once told me, the wisdom that comes with age is that wisdom does not come with age.) If Reggie at first does not want to forgive Jean the wrong she did him decades ago, for her part she is too proud to sing the legendary quartet from Verdi’s “Rigoletto” they once performed with Wilf and Cissy (Pauline Collins), a flibbertigibbet fellow resident whose worsening mental condition makes the whole enterprise hazardous to begin with.

I suppose that to appreciate this movie you have to possess the imagination and sympathy to agree that the quartet from “Rigoletto” really is a wonderful achievement of human culture that should not be lost, and not just some silly or poisoned piece of 19th-century frippery that only old and rich people care about. (It would have been so easy to make the scene in which Courtenay’s Reggie talks to teenagers about the relationship between rap and opera condescending, but instead it’s quite wonderful.) But the question of whether the geriatric quartet can reunite one more time, at a public gala that will raise enough money to keep Beecham House running, is almost the ultimate MacGuffin.

This movie is much less about that than about the slightly acrid foreground charm of Smith, Courtenay, Connolly and Collins and about the background performances by an entire roster of British performing-arts veterans. Michael Gambon, once the star of Dennis Potter’s groundbreaking miniseries “The Singing Detective,” has a hilarious turn as Beecham House’s resident impresario, with an impetuous temper and a ridiculous dressing gown. Gwyneth Jones, a real-life Welsh soprano and top-level opera star, plays Joan’s rival, who throws down at the gala with a killer performance of Puccini’s “Vissi d’arte” from “Tosca.” (It’s definitely Jones singing, but I assume it’s from a recording.)

From former music-hall performers to orchestral violinists and pianists, one-time Sinatra sidemen and veterans of the eccentric (and tragically defunct) D’Oyly Carte Opera Company, “Quartet” is alive with the sounds of an era in British high culture and middlebrow culture that has now reached sunset, and is moving toward dusk. Yet there is no sense of tragedy about this film or its people, only a wistful determination to face the final curtain with head held high, a stiff upper lip, and projection from the diaphragm. Exactly how and why a Jewish guy from Los Angeles wound up directing this quintessentially English film I have no idea, but it’s a lovingly crafted little marvel, perfect (as they say) for audiences of all ages.

"Quartet" opens this week in New York and Los Angeles, with other cities to follow.