Here's how to find the ideal stroller or kickass camera: Tap into the greatest "word of mouth" network ever built 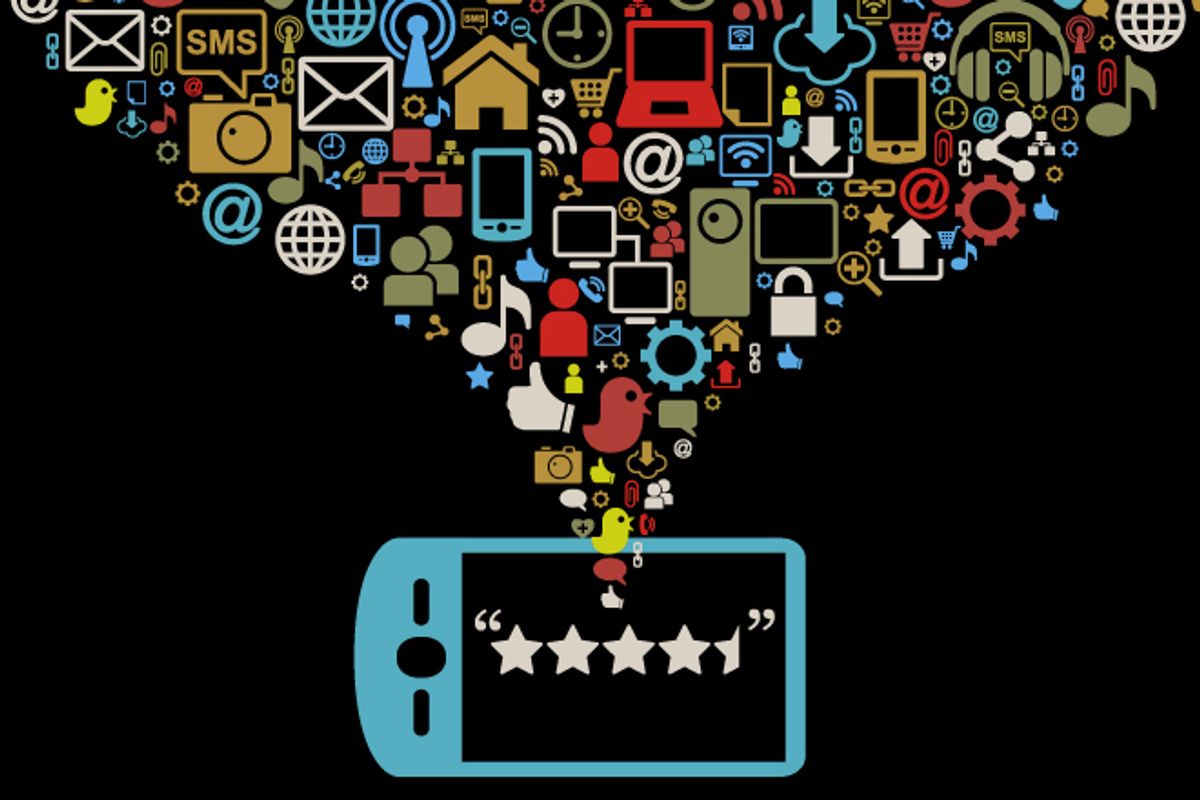 This is the first column in Salon's newly-launched technology section.

Over a lunch of masala dosa and aloo tikki at Vik's Chaat in Berkeley, Calif., Manish Vij, CEO of Daring Software, is demo-ing his company's new shopping app, Arrow.

The software is simplicity itself. First, you choose from one of 10 product categories: for example, "Bluetooth headset," "camera," "hiking shoes." (Vij says more categories will be added in the future.) Then you rank which attributes of that product are most important to you -- for the Bluetooth headset you might choose "easy to use" and "comfort," while another shopper might go for "signal" and "volume level." There's a slider bar to determine price range, and that's about it. You click your buttons, the app crunches "ratings" of the products culled from the Web, and pops up a ranked list of top-rated suggestions.

Click on the first choice -- a Bose Series 2 -- and along with a couple of links to purchase the item from Amazon and Best Buy (Arrow's business model, for the moment, is to generate cash as an affiliate) -- you will also see multiple reviews of the headphones from real people.

Which is where I got curious. The world is full of slick shopping apps, but something like Arrow will only work if users can trust the ratings and reviews that make the whole thing go. So where were these reviews coming from? And why should I believe in them?

The answer to those questions offers a glimpse into the evolution of the Internet's hive mind -- and the efforts of retailers to exploit it. It might come as a surprise to those who think -- with some justice -- that the universe of Internet comments is little more than an infinite morass of spam and flame wars and astro-turfed marketing campaigns. But for online retailers, word of mouth, or, to be precise, what's known in the trade as "authentic word of mouth," is pure gold. We don't trust marketers and we're wary of sales bargains that are too good to be true, but we'll usually let ourselves be swayed by the consensus of our peers. So-called social commerce -- where social media and the marketplace merge -- is built upon real people telling each other what they think about real products. If you can tap into that conversation, you have a chance at survival in today's insanely competitive retail marketplace. If you can't, you might as well not even try.

Vij explains that Arrow's ratings and reviews are generated by a company called Bazaarvoice. After purchasing a smaller competitor last spring, Bazaarvoice is now the reigning powerhouse in aggregating and enabling online consumer product reviews that take place outside the walled gardens of Internet giants like Amazon and eBay and Facebook.

So if you review a product that you purchased from Best Buy or Target or Radio Shack or Staples, you are likely doing so via a cloud-based software architecture provided by Bazaarvoice. A few weeks after purchasing that product, you may have also received and filled out a survey via email asking you to rate your purchase according to various criteria. That, too, is managed by Bazaarvoice. Your word of mouth has been monetized. Your authenticity has been captured.

For years, the writing has been on the online bulletin board. Before making a purchase, consumers go to the Web first and do some research. Studies conducted by retailers suggest that other people's opinions have become the critical factor influencing that all important moment -- the purchase decision. So the race is on to tame the chaos of online conversation and translate it into formats that retailers can exploit.

Enter Bazaarvoice. In theory, the scale of Bazaarvoice's operation -- lots of retailers, lots of reviews, lots of ratings -- defeats fraudulent attempts to insert fake reviews into the conversation. But the effort to ensure integrity is important enough that Bazaarvoice has an employee with the delightful title of "Director of Content Authenticity."

In a conference call last May announcing and explaining Bazaarvoice's purchase of its competitor PowerReviews, CEO Brett Hurt made the case for his company's business model.

...[I]ncreasingly the authentic content we collect is being used to make purchase decisions no matter where the consumer is shopping due to mobile, kiosks, in-store displays, and other means. Our brand clients, who sell through these retailers, get tremendous value by using our technology platform to collect authentic word of mouth content and then distributing that content to their consumers through the Bazaarvoice network. A brand such as 3M that sells through Staples, who is a PowerReviews client, as well as OfficeMax, who is a Bazaarvoice client, can now much more efficiently distribute content and interact with their consumers using our solutions. For the PowerReviews retail clients, we can now bring them much more authentic word of mouth content to help their consumers and drive more sales for both the brands and the retailers.... Independent research shows how much consumers trust this content and they want as much of it as possible to help them in their purchase decisions, no matter where they shop.

Bazaarvoice's business model has come under some heavy fire from analysts. The company is not profitable and operates in a market where some very heavy hitters -- Google, Microsoft, Facebook -- are focusing vast resources on efforts to aggregate and understand consumer opinions and preferences.

But whether or not Bazaarvoice figures out how to cash in on the hive-mind conversation obsessing about the best camera or stroller or running shoes, one thing's for sure: That conversation is not going to stop, nor are the efforts to distill our collective consciousness into hard facts about retail sales opportunities. And there are some really interesting implications embedded in this new shopping paradigm. When Manesh Vij makes his pitch for Arrow, he argues that the products that rise to the top of the rankings really are the best products -- at that price range, for those particular user-selected attributes. The people, he says, do not err.

Suppose he's right. What happens to the marketplace when we can unerringly find what we really want when we go shopping, when our social media conversation routinely overwhelms the influence of marketing campaigns and ad blitzes? Doesn't that mean that bad products will gain less and less traction? Since purchasers will likely coalesce quickly around whatever product gets the hive mind endorsement, won't that mean that competitors will have to ramp up innovation and push the state-of-the-art forward even faster than before? Prices will have to fall, features will have to improve. Faster and faster and faster.

Which will, I guess, give us more things to talk about online, for others to listen in on and exploit.