This year, I resolve to be the person I was before the time-wasting, approval-seeking site got the better of me 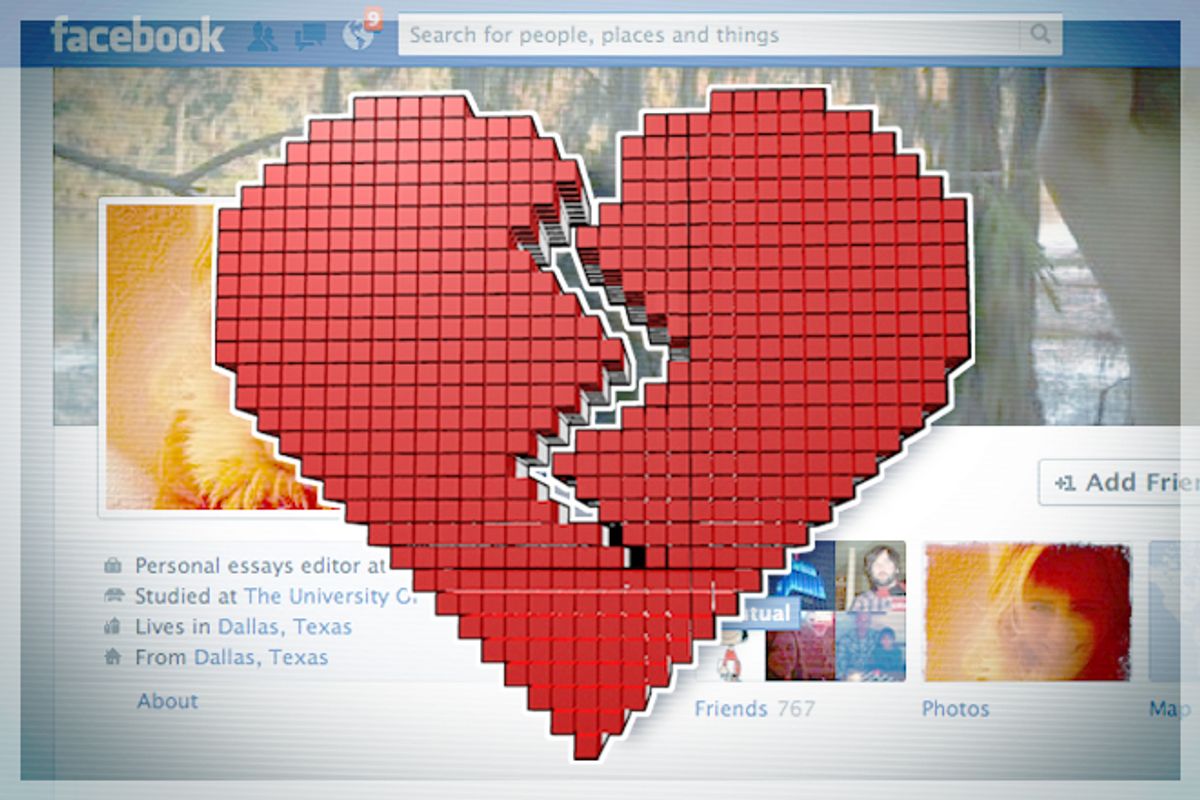 Two days after I’d made the New Year’s resolution to quit Facebook, I realized how much the site had been messing with my mind. Holding hands with my son, walking down a gritty urban street in downtown Los Angeles, I suddenly stepped out of myself and observed the way my innocent, sun-kissed 6-year-old contrasted with the steely greys of the streetscape around us. I saw the construction, the hipsters strolling with their hip dogs, and thought, “I need to post this.” Not, “I need to take a picture of this,” but that I needed to share this experience with others. What had been a mother-son excursion to a downtown bookstore became fodder for an audience of hundreds.

The impulse hit me hard and felt incredibly wrong. When I was a kid, I sometimes worried about what my incessant TV and movie watching was doing to my experience of everyday life. To make the day more exciting, I’d sometimes imagine that I was in a scene from a film. Even when I wasn’t actively daydreaming, I’d sense that my perception was being slightly altered, as if cameras were on me. Nothing too extreme, but just a nagging feeling of being onstage. I’d see myself from the outside; happy moments were occasionally tinged with foreboding – tragedy always interrupted joy in movies, right? But that sensation was a tiny nudge compared to this, the sense that I needed some kind of virtual applause for just being somewhere. The fact that my child had become online “content” was even creepier.

And not even a week into this experiment, I already felt sunk.

The suspicion that Facebook was satisfying a need I didn’t even know I had -- training me for a certain kind of behavior -- made me wonder if I needed a support group or something.

I wasn’t always like this. I first logged in to Facebook merely to look at photos from my far-flung family. A few years back, my brother invited me to join. He posted for a while and then he seemed to completely vanish from his page – no more updates, no more pictures. He had sent an ominous email, something to the tone of “Be careful. It’s addicting.” We never spoke of it again.

Of course, he was right. Facebook has become a place where so many of us try to regain the feeling of being connected, to assert our personalities after the workday’s done (or while it’s happening). We know the pattern by now. That initial rush arrives with the first “like,” comment, or share. Then it becomes a habit. Instead of reading a book or the newspaper, I would troll through my friends’ pictures or comments, jumping from one stray, random idea to another. I was feeling fragmented, even a bit wasted, by the end of my daily FB journey.

I had to switch roles often on Facebook. Students at the school where I work would friend me, and then I would have to alter my comments. My boss friended me. Soon, I was jumping through a number of mental hoops, double-checking whether the “me” I broadcast was professional, upbeat, proper. It's not easy to make all these projected selves cohere: My friends and family include folks from Southern evangelical Christianity, from the rap/rock critic subculture, from '90s bohemia, from mommy-land, from the public-education universe. My guess is that most people on social media have some variation of this problem. In life, I entered each space separately; on Facebook, it all happened simultaneously.

I found ex-boyfriends through the site – one of them chastised me for not posting enough photos. I was never “good enough” for Facebook.

But the fantasy of leaving -- and FB was such a part of my life that it definitely felt like a fantasy -- began to tug at me when I started seeing posts by friends attending a colleague’s wedding. The idea that I hadn’t been invited didn’t bother me at first, until I saw who had been – pretty much all of my co-workers on Facebook. Why had I been left out? The question popped up every time I saw a new post of the festivities, which was constant. I got a glimpse of all of the antics, the smooshed-cake faces, the pre- and post-wedding shopping, the heaping plates of food, the jovial bonding. It was a constant reminder that I was on the outside looking in.

Some people say that the Web takes everyone who uses it – regardless of age -- back to a high-school mentality. But this experience vaulted me back to junior high, when a new girl, a queen bee, entered my group of more-or-less popular friends. She instantly turned them into a vicious pack of exclusionary vipers, seeking opportunities to create lower-caste members of the group and to make them taste the pain of rejection again and again.

Of course, my colleague is nothing like that blond, mini-skirted sadist, but the experience made me think of how brutal Facebook would have been for that junior-high me, suddenly ousted, watching the fun from the sidelines. Kids today must have to weather a heap of pain and rejection beyond anything that my generation can even imagine.

After junior high, I vowed to eschew in-group approval. I painted, wrote, read “The Catcher in the Rye” 11 consecutive times and hung out with nice, interesting kids who had too much going on – like their quest to find rare '60s vinyl records in Silver Lake basements – to get off on making others feel bad.

Then, unwittingly, I rejoined the approval-seeking party when I signed up for Facebook. I would thrill when my posts got traction and sink a little when they didn’t. After an hour-long session, I would go to bed feeling fragmented and rattled, unhappy that I had spent my time jumping from one random item to another, knowing that there is something deeply disquieting about both the reading of posts and the posting.

I began to see – on Facebook – other people making public declarations about breaking up with the site. Most of them were pissed off about privacy issues – quitting because they didn’t want Facebook owning their birthday, or photos or whatever. And that’s when I decided to make my move.

I decided not to post an “I’m quitting” update on my wall because I worried that it might sound self-righteous, kind of like yelling out “This bash sucks!” before slamming the door behind you. However, the pull of the site is so strong that one cannot quit without making it official. Users need to plant a flag and say “it’s over” to keep them true to their vow. A public goodbye makes it harder for me to walk it back a week later: I’m guessing it will keep me from being one of those people who goes on a New Year’s diet and then falls into a pizza orgy before Martin Luther King Jr. Day.

It’s been just a few days without Facebook, and I’m already feeling much better about not logging in. Although I’m fond of my Facebook friends, I don’t think I will miss their posts. In fact, I believe that I see my friends less because Facebook gives us the sense that we are connecting when we really aren’t: Maybe my quitting the site will mean that we’ll feel the need to actually have a drink together sometime. I definitely feel that a certain part of me may be invisible or even die without Facebook -- that quitting means entering a silent, private, faceless realm. But that approval-seeking me is someone I said sayonara to all those years ago – and I don’t want her back.

Sometimes I wonder if my New Year’s resolution is unrealistic or too Luddite. (Can I really go back to a pre-Facebook era? What’s next? Typewriters? Scrap-booking?) I only know two people who are not on Facebook, and one of them is an octogenarian.

But then I think of some of the current high school and college students that I’ve spoken to recently about their digital habits. Finishing up my graduate library program, I interviewed college students about texting and Facebook. I expected that social networking was so fully embedded in their lives that they would have a difficult time stepping out of it, but I was surprised to hear from many a sense that something had gone awry with their plugged-in lives. One eloquently described his need to unplug but said that he could never even think about doing that for very long. “My friends would get worried,” he said. “They would think that something was wrong.” The way he described it, he was like an imprisoned juggler, perpetually condemned to keep the social networking and texting balls in the air. He couldn’t escape even if he wanted to. Would he – on unplugging -- simply disappear?

I think I can disappear for now. The party will have to go on without me for a while. As the days go on, I’m automatically being drawn to more rewarding tasks – reading Virginia Woolf and the New York Times, writing in a journal, maybe even getting back to painting and playing guitar. Life feels less like a strange simulation. I might find my cooler, less needy self in the process. Maybe I’m an early adapter after all.