Sarah Losh and the strange, beautiful, "pantheistic" church she built in an obscure corner of 19th-century England 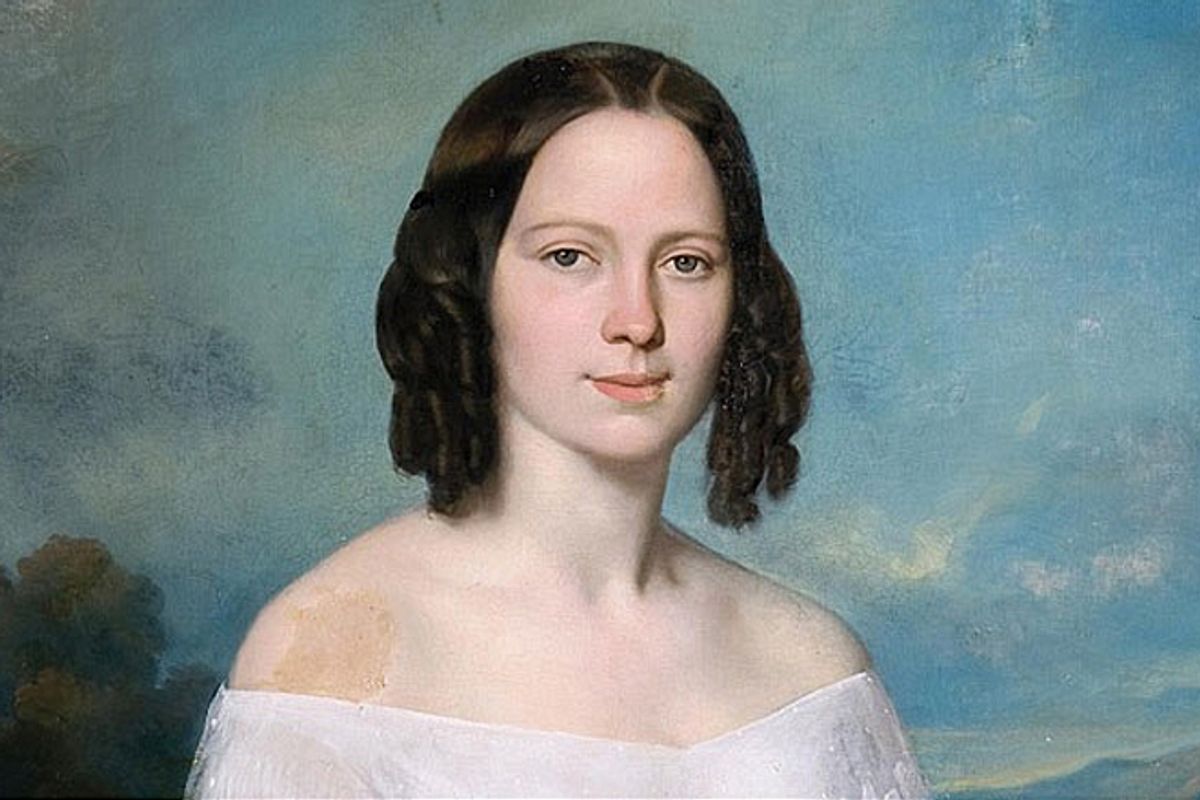 In a remote rural corner of northern England stands a small, deceptively simple-looking church, built in the early 1840s. The church, St. Mary's in the village of Wreay, Cumbria, is remarkable for several reasons. It was built in a style -- the Romanesque or Norman, although the architect called it "Saxon" -- that recalls the earliest Christian churches but that was decidedly out of fashion at the time. (The Gothic Revival of London's Palace of Westminister, with its tower containing Big Ben, was both all the rage and regarded by some authorities as morally and theologically obligatory.) Instead of the saints, biblical scenes and other customary motifs of ecclesiastical architecture, the windows, stone ornamentation and wooden carvings used to decorate the interior of St. Mary's depict such natural forms as coral, flowers, birds, insects, reptiles, vines and -- in the semicircle of high, deep windows at the top of the apse, carved from translucent alabaster -- fossils. You had to look hard even to find a cross.

When the pre-Raphaelite poet and artist Dante Gabriel Rossetti first saw St. Mary's and some surrounding structures erected by the same artist in 1868, he proclaimed them "real works of genius, but most especially the church at Wreay ... very original and beautiful, very much more so than the things done by the young architects now." Rossetti was also not insensible to another unusual fact about the church: It was designed and built by a woman.

"The Pinecone" is British biographer Jenny Uglow's account of the life of that woman, Sarah Losh, a landowner whose family had deep local roots. At the heart of the book is an enigma, Sarah herself, who burnt many of her papers before she died in 1853 and whose journals and notebooks have been lost. Yet this only makes Uglow's attempt more arresting and the mystery of Sarah's genius more evocative. The celebrated Uglow, not an unduly speculative writer, has located several firsthand sources on Sarah's personality — all of them written, ironically, by men — and the ample paper trail left by a woman of Losh's prominence: minutes from town meetings, subscription lists for charities, inventories, wills, deeds, receipts, etc. The author also presents a consummate portrait of Sarah's times, from its radical political movements to its scientific breakthroughs -- all of which passionately engaged Losh herself.

A daughter of the Regency, Sarah Losh makes an excellent illustration of Virginia Woolf's central argument in "A Room of One's Own." She was able to pursue her desire to build because she was independently wealthy, unmarried and locally influential, and she acquired the knowledge to do it because her older male relatives honored and encouraged her intelligence. The fact that her talents didn't earn her wider recognition and opportunity, however, suggests the outer limits of Woolf's prescription. Whereas women writers (if they got enough time to work) might hope to achieve a fame similar to (if usually not as solemn as) that accorded to male novelists, Sarah Losh's interests lay in mathematics, the natural sciences and architecture. Women of her day might get to hunt for fossils or play handmaiden to a man engaged in such studies, but they were barred from the scientific and antiquarian societies where major discoveries were announced and discussed. Women architects were simply unheard of.

Yet Losh's life spanned a period of great change, and for all that she lived out in the sticks, she enjoyed a ringside view on much of it. She was the daughter of a country squire, but her uncles (she had three, all doting) were inventors and industrialists; a good part of her fortune derived from the "soda factories" founded by her uncle William, who helped devise a method for synthesizing the alkalis essential to several types of manufacturing, and from iron foundries and railways. Her uncle James participated in the reformist political currents streaking across Britain in the early 1800s and was a close friend of Wordsworth and Coleridge from early in their careers; Uglow believes Sarah and her sister Katherine were among the first women to hear "The Rime of the Ancient Mariner" read aloud. She knew William Gilpin (the originator of the "intelligent design" theory) and Elizabeth Gaskell and traveled as far into the continent as Pompeii, where both the architecture and the use of decoration based on closely observed natural forms made an indelible impression. Losh was a great reader, particularly interested in politics and the sciences, and she spoke several languages.

Sarah and Katherine Losh were as handsome, clever and rich as Emma Woodhouse, that creation of Jane Austen, Sarah's somewhat older contemporary. And like Austen and her sister, Cassandra, their primary emotional connection was to each other. Both sisters seem to have resolved not to marry — at any rate, they refused all proposals. When Katherine died of an illness in 1835, Sarah was inconsolable. One of the handful of structures she built in addition to St. Mary's is a stark "mausoleum" in Katherine's memory, a cell-like edifice sometimes described as "druidic," containing an austere marble statue of Katherine holding a pine cone, her sister's emblem. It is, as Uglow describes it, less a memorial than a physical manifestation of Sarah's grief.

Uglow believes that St. Mary's Church, a project the sisters had had in mind for a while, was the result of an eruption of creativity Sarah experienced as she emerged from the worst of her mourning. It's impossible to know for sure, however, what Sarah was thinking or feeling as she designed and supervised the construction of her masterpiece. Although she carved some of the elements herself -- most notably a baptismal font designed to look like a lily pond -- most were made by local artisans under her direction. These men were skilled, but not fine artists, and the results are for the most part unrefined and all the more moving for it. The backgrounds of the stained-glass windows, whose primary images were of flowers, were assembled from broken glass apparently gathered from the workshop floors of glaziers. They look startlingly modern.

Surely Losh was being frugal in making these choices, but did she also want ornaments for her church that grew from the taproots of her home? Did she anticipate William Morris and his Arts and Crafts movement by two decades? Then there's the content of the decoration itself. Why in commissioning the church's two carved wooden lecterns, did she opt to have them represent a stork and an eagle? And why was the pulpit carved to resemble "a ringed fossil tree, a calamite, with a primitive horsetail for a candlestick"? We may never know the answer, not unless Losh's journals and notebooks resurface. (Uglow thinks they will.)

Still, you can't help but wonder what Losh's fellow parishioners thought of her church, whose belfry is topped by an eagle instead of a cross, and whose windows are rimmed, on the exterior, with carvings of plants and beasts. "The imagery of the church suggests she was a deist," Uglow writes, "not holding to doctrines of the Trinity, race or redemption, but a believer in an Ens Entium, a Supreme Being who had set the universe in motion, renewing itself in measureless time." Elsewhere she characterizes the symbolic vocabulary of the church as "pantheistic." Uglow knows that Losh read widely in contemporary theology, and suspects her of making allusions to Egyptian mythology by including many images of lotuses in the church. The fossils suggest the emerging understanding of the Earth's immense age, theories the amateur naturalist Losh followed closely.

On an earthier note, there's also a smiling bat and a grub gnawing away at one of the stone vines and more than a few pine cones. (Let's not even get into the brass arrow mysteriously embedded in the church's wall.) These Uglow reads as references to the texture of everyday country life, perhaps also the idea that God is immanent in even the humblest details of creation. The treat you might not expect to get from "The Pinecone" is just how palpably Uglow evokes that Cumbrian life, from the doings in the village to the shifts of the seasons: "The frost lingered, but in March the sun arrived, the peas and beans were planted and the workmen came back to Wreay," she writes at one point, presumably drawing on the diaries of local farmers that she quotes on several occasions.

I have never read a biography quite so atmospheric, or at least not one that succeeds so well at making you feel both the dawn of a new era and winter giving way to spring as it has done for countless generations before. Sarah Losh lived, comfortably it seems, both in an immemorial landscape and in a time of irresistible change. Uglow may not be able to tell us exactly how Sarah felt about all of that, but she comes magically close to making us feel it ourselves.

You can find a Flickr stream of photographs of Wreay, St. Mary's and other Sarah Losh works here.