Who will claim the bodies of unknown immigrants?

Forensic scientists are working to identify thousands of anonymous corpses along the U.S.-Mexico border 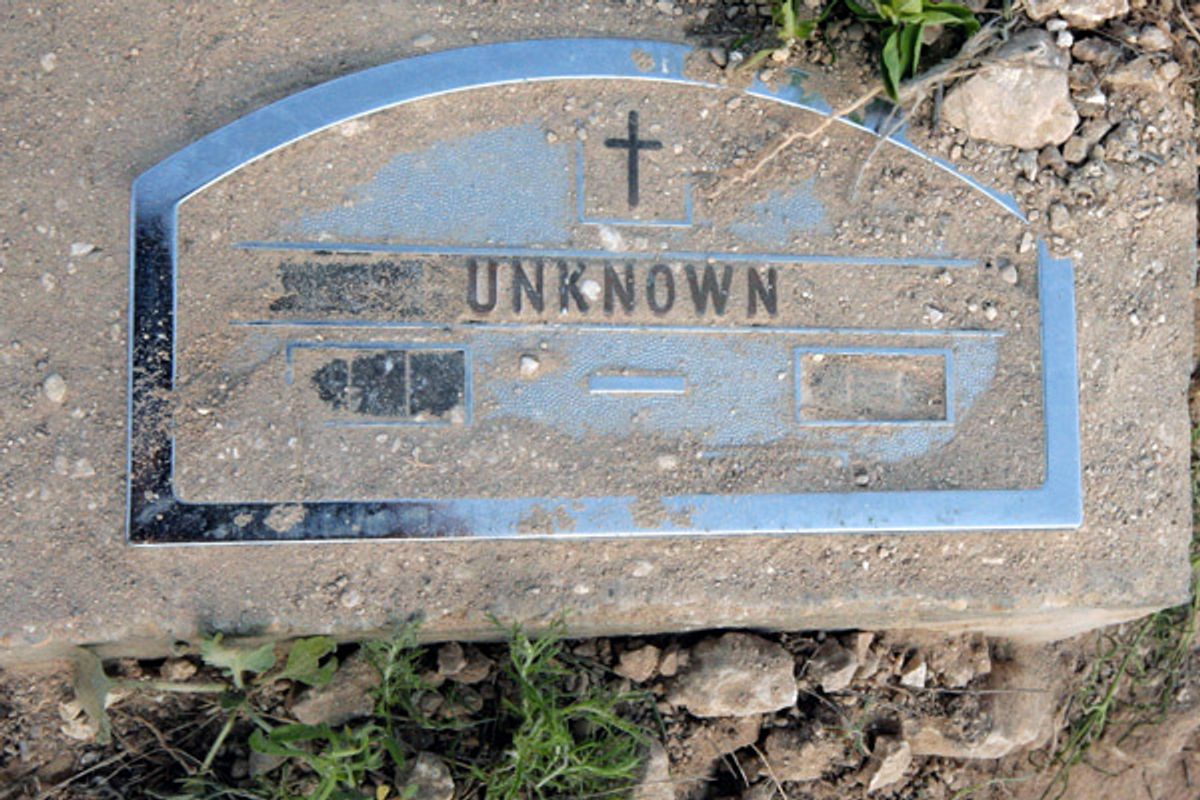 At the bottom of a freshly opened grave, two young women use brushes and dustpans to sweep the last traces of powdery south Texas soil off the coffin. It’s a little before 8 a.m. on a cloudless May morning, and the punishing sun will soon push the temperature into the 90s. Up on ground level, the excavation’s super​visor, a sprightly forensic archaeologist named Lori Baker, snaps photos of the work. All around them, granite headstones display the names of the dead buried here in the city of Del Rio’s Westlawn Cemetery—Connor, Pennington, Ramirez. Baker has come here from Baylor University in Waco, Texas, to determine the identity of the others, the ones without headstones or whose resting places bear a single word: Unknown. Many of them, she believes, are illegal immigrants who drowned in the Rio Grande or died from heat exhaustion—and whose families have no idea what became of them. “It doesn’t matter if they disappeared in the 1990s,” Baker says. “People don’t stop searching.”

Baker’s team soon gathers around the grave, and two students pry open the coffin with hammers. Inside lies a woman’s body, partially mummified. A clump of hair rests alone, like a bird’s nest, on the pillow. “Where’s the head?” someone asks. Then they spot it. Her head lies at the foot of the coffin, next to two cotton slippers—a final indignity for a woman buried without a name. The cemetery’s gravedigger says the head must have fallen off and rolled there years ago, when the coffin was dug up and moved to make room for another grave.

The decapitated woman’s exhumation is the first of many in Baker’s efforts to identify anonymous immigrants’ corpses in Texas. She will provide samples of DNA extracted from the bodies’ bones to match against databases compiled by the Mexican and U.S. governments. Her painstaking work, she hopes, will give closure to families who don’t know whether a vanished relative has died, been kidnapped, or is simply out of touch.

The number of undocumented immigrants caught by the U.S. Border Patrol has plummeted from a peak of 1.2 million in 2005 to 340,252 last year. But the number of deaths has not fallen apace; hundreds of corpses are still found every year. In 2011, 42 percent of the 357 deaths reported by the Border Patrol were in Texas, where many of the bodies are recovered from the thorny scrub of ranches. And that’s only the bodies the patrol found. My visits to county offices and graveyards, together with surveys by government officials, suggest that thousands of anonymous corpses have been buried in Texas over the last 20 years. A statewide law directs officials to collect DNA samples from unidentified corpses, but both funeral directors and law-enforcement officers tell me that doesn’t always happen. After all, only one of the 15 border counties in Texas has a fully equipped medical examiner’s office.

It’s a long-standing problem all along the border. Several years ago, Bruce Anderson of Arizona’s Pima County Office of the Medical Examiner was facing a surge in unidentified deaths, from an average of just a dozen a year to 200. “We had 100 bone samples in our freezers,” he recalls. He contacted Baker for help, knowing she had used genetics to study ancient American migrations. Baker paid her own way to Pima County and started taking DNA samples. She soon cracked her first case, identifying the remains of a mother of two who twisted her ankle while crossing into Arizona and was abandoned by her companions. The woman’s family broke into tears when television reporters interviewed them about the discovery.

The Mexican government soon gave Baker grants to sequence the DNA of 250 more bodies, yielding about 70 matches. In 2004, the U.S. Department of Justice began paying for the sequencing of the roughly 4,000 unidentified remains recovered on U.S. soil each year, wherever they’re found. By now, Anderson has identified 65 percent of the 2,000 anonymous cadavers found in Arizona over the past decade.

Baker, meanwhile, has shifted her modest lab’s focus to long-buried bodies. In addition to looking at DNA, she’s also analyzing trace elements found in the remains. The elements can show evidence of the person’s diet, which can help separate foreigners from locals.

Last spring’s trip to Del Rio proved how grueling her project will be. She first tried the city’s San Felipe Cemetery, but the aging groundskeeper couldn’t recall where he had buried unidentified bodies. So she moved on to Westlawn Cemetery, several miles away, which seemed to have better records. One team of her students, however, spent four days digging in the 100-degree heat before they uncovered a corpse clasping a plastic-wrapped Bible—from the Retama Manor Nursing Center. Not an unknown body after all. Baker had already spent an afternoon in the emergency room with a serious bout of heatstroke and was not pleased with one more frustration.

After 10 days of work, the group packed six bodies into the back of its trailer and headed north to begin the laboratory work. Just a few days later, a call came in to a nearby sheriff’s office. A body had been found on a remote ranch. It was going to be a long summer.

Brendan Borrell reported this story with the support of a freelance grant from Investigative Reporters and Editors.