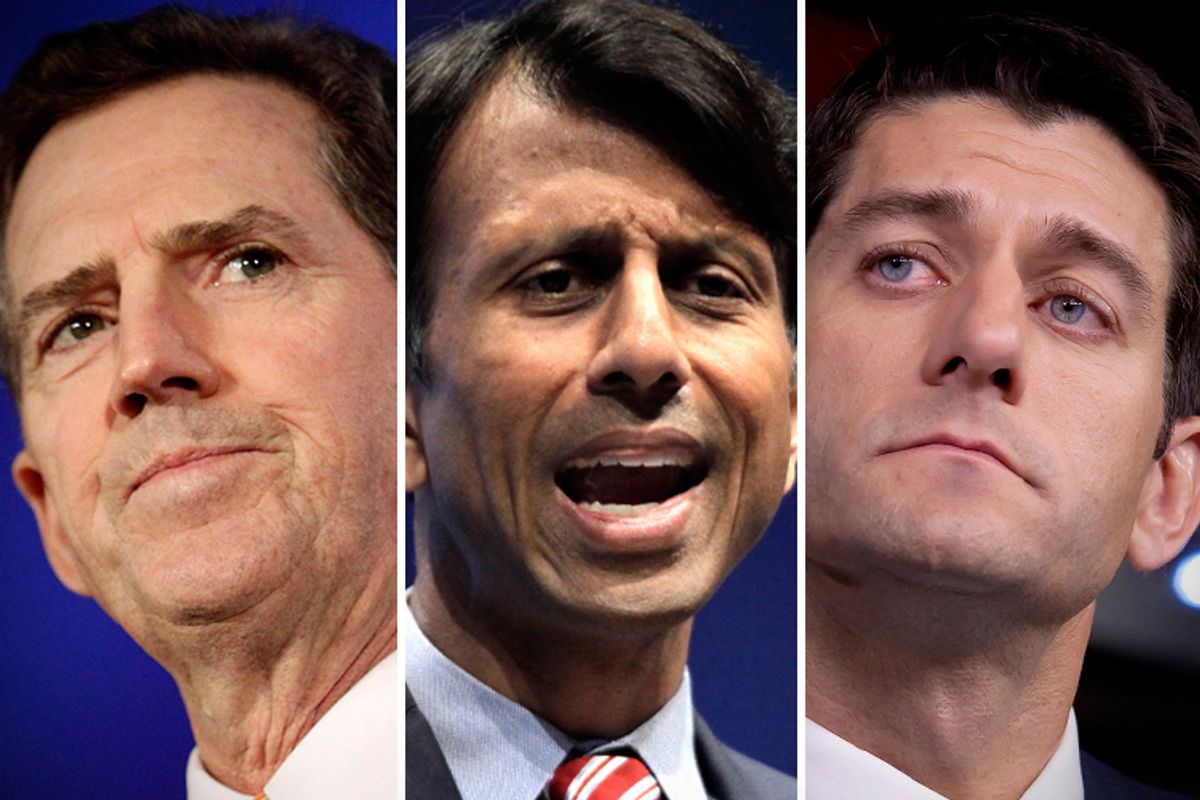 The Republicans, we're told, are going to have to start making some big changes if they want to start winning elections again. (Besides all the congressional elections they handily win.) Americans are tired of their stale rhetoric and old, white standard-bearers. The party needs fresh blood and bold ideas. It needs people like Louisiana Gov. Bobby Jindal, a GOP rising star and highly regarded "ideas" guy.

After the election, Jindal told Politico that the Republicans had to totally rebrand themselves to escape being known as "the party of big business, big banks, big Wall Street bailouts, big corporate loopholes, big anything." And so Bobby Jindal's big new idea for Louisiana is ... eliminating all income taxes. And shifting the tax burden onto poor and working people.

Bold! Fresh! New! But how will Louisiana get money to pay for stuff? Easy!

Political analyst John Maginnis, who on Thursday reported in his email newsletter LaPolitics Weekly that Jindal will propose balancing the tax loss by raising the sales tax, now at 4 percent, said the strategy fits with the governor's interest in keeping a high national profile.

The thing about sales taxes is that they are inherently and extremely regressive, hitting poorer people much harder than richer people, because the poor spend a greater proportion of their income on goods subject to the sales tax than rich people do.

The Institute on Taxation and Public Policy has already whipped up a little report, and, surprise, eliminating Louisiana's income tax and replacing it with higher sales taxes means taxing rich people much less and poor people much, much more. According to ITEP, while Louisiana millionaires would receive a tax cut of around a quarter of a million dollars, "[the] poorest 20 percent of taxpayers, those with an average income of $12,000, would see an average tax increase of $395, or 3.4 percent of their income, if no low income tax relief mechanism is offered." (And if a low income tax relief mechanism is offered, it will have to be paid for, almost definitely on the backs of the middle 20 percent, with average incomes around $43,000.)

This is the fresh new plan from a guy regularly touted as the future of the party: A massive tax cut for rich people, in an already low-service state, paid for with a tax hike on poor people. Remember this the next time you read a story about how a major conservative figure -- like Jindal or Marco Rubio or Paul Ryan -- has announced that his party has to get serious about helping the poor or at least not actively hurting them: The movement these guys are products of is incapable of generating "new ideas" to help poor people, and is still dedicated to a policy agenda developed mostly before Reagan was president.

Jim DeMint is not a fresh face, but he's the new head of the Heritage Foundation, the most influential and powerful of the conservative think tanks. Heritage's mission is to decide the policy agenda of the conservative movement. If "new ideas" on poverty or anything else are going to gain acceptance on the right, they will likely have to come from the Heritage Foundation. And so DeMint published an Op-Ed in the Washington Post last week, laying out his agenda as the new face of the intellectual arm of the movement. It is atrocious. It is so lacking in anything resembling substance or argument that I can't figure out why the Post published it. This is the closest it gets to an attempt at persuasion:

OK, sure. "Conservative ideas work and liberal ideas don't" is a very compelling message. Remember what I said about the policy agenda not changing for 30 years? The rest of the piece is mostly about welfare reform and missile defense. DeMint says Heritage will work very hard on convincing Americans that ideas like welfare reform and missile defense are good ideas. And then we'll defeat the commies and show the Ayatollah who's boss. Maybe we can fight a War on Drugs, too?

How's that welfare reform working out for people, exactly? In the state of Georgia, where 300,000 families survive below the poverty line, 4,000 people are on welfare. The goal is zero people on welfare. Not "zero poor people," but zero recipients of government benefits. Welfare reformers, whose goal is the shrinking of welfare rolls, not the aiding of impoverished people, would consider this a success story. Conservative ideas work!

The Republican Party will not "get serious" about poverty, or foreign policy or climate change or anything else, until it extracts itself from the conservative movement that rescued it after the collapse of the New Deal coalition. But there's not a single GOP "leader" or rising star who isn't a product of that movement through and through. They may fix their electoral problems with fresh rhetoric or new faces, but once in office they'll govern as if nothing has changed since 1980, with disastrous results for every non-wealthy American.