Did the Golden Globes upend the Oscar race? 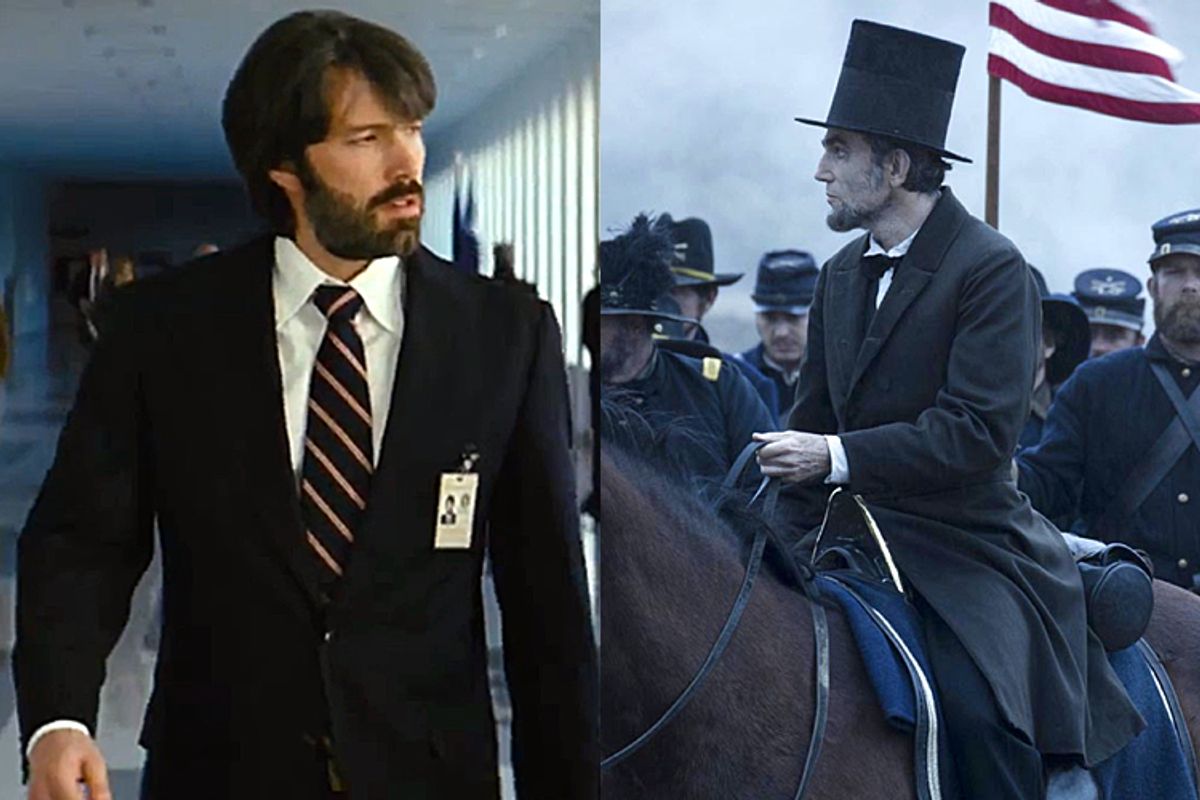 If the Oscars are a defining pseudo-event of our time – a self-promotional industry trade show we have all agreed to invest with larger cultural meaning – then what term could possibly be adequate to describe the Golden Globes? If anything, the Globes now possess an aura of pure cheesed-out spectacle that is sometimes masked by the self-seriousness of the Oscars. Journalists often treat the academy’s annual election season, with its voter base comprising a few thousand elderly folks in the western half of Los Angeles County, as if it were the Super Tuesday primaries, and as such susceptible to all sorts of amateur social science and insider-baseball analysis.

But the Globes are voted on by a group of 80 or so Hollywood stringers for foreign newspapers who spend their working lives on the studios’ gravy train. They aren’t critics, and most of them aren’t even full-time professionals. The impolite industry term for what those people do begins with “junket,” and ends with a word describing the world’s oldest profession. But if you want some explanation for the influence and bizarre clout of the Golden Globes, it lies in the fact that the members of the Hollywood Foreign Press Association are indisputably movie fans. Indiscriminate and promiscuous movie fans who deliberately avoid choosing between lightweight and serious fare – splitting their major awards between “dramatic” and “musical or comedy” categories – and who are committed, first and foremost, to putting on a show.

While the big news on Sunday night’s Globes telecast was surely Jodie Foster more-or-less coming out (while accepting an honorary award no one cares about or understands), the HFPA also succeeded in throwing the Oscar race into confusion, at least for the moment. Officially, the Globes never have much influence on the academy’s voters, who view the HFPA and their showcase with professional disdain. This year, the academy even took steps to neutralize the Globes’ perceived effects, by announcing the Oscar nominations before the Globes ceremony for the first time in recent memory. But the Globes’ X factor I just alluded to, the fact that HFPA voters are more like movie fans than industry professionals, is precisely what lends these awards some apparent weight. And this year’s Globes suggest that movie fans are confused and divided by a bumper crop of quality films.

Most notably, by spreading their awards over so many different movies, Globes voters made it clear that they weren’t sold on “Lincoln,” which I still regard as an overwhelming favorite in every major Oscar category (with the sole exception of supporting actress). They were also scared off by "Zero Dark Thirty," but given the media controversy surrounding that film's depiction of torture, that's no surprise. In both cases, this might reflect the fact that most of the HFPA’s members are not Americans, but I suspect it’s more about the fact that Steven Spielberg’s historical opus, despite its stellar ensemble cast, simply does not offer the kind of lightweight popcorn celebu-tainment Globes voters favor. Ben Affleck’s “Argo” is an America-centric film too, one that massages the unsavory real-life saga of our nation’s tortured relationship with Iran into a zany, up-tempo thriller with a Hollywood subplot. “Argo” captured the Globes’ best-picture award (in the drama category) and also garnered a directing award for Affleck, who wasn’t even nominated by the academy.

In the musical/comedy slot, the Globes’ best-picture prize went to “Les Misérables,” which has built a devoted popular following despite widespread critical derision and a general sense within Hollywood that the whole experiment of having movie stars sing live sounded a lot better in theory than it does in practice. Like “Argo, “Les Miz” is now perceived as a non-factor in the Oscar race, at least if we go by the conventional wisdom that a best-director nomination is an absolute prerequisite for winning best picture. You could make a case that the big Globes win for “Les Miz” further damages the Oscar prospects of David O. Russell’s “Silver Linings Playbook.” But that’s too boring an area of speculation, and I’m stopping right there.

In the wake of that chaotic awards spread at the Globes, various commentators will now proclaim that the Oscar race is wide open or has become totally unpredictable. Well, here’s what I have to say to that: Remember all those people in October who tried to convince you that the presidential election was a dead heat, and might end up being decided on a handful of votes in Ohio, or thrown into the House of Representatives after an Electoral College tie? That was an attempt to keep you riveted to the so-called drama at precisely the moment it was decisively dissipating, and so is this.

Mind you, the Globes did a nice job of justifying their existence, even in a year when they’ve been successfully defanged as an Oscar predictor. It was a reasonably fun and freewheeling TV show, larded with boozy celebrity silliness and offbeat moments, and that’s the sole and entire reason why the HFPA exists. The Oscars may well be less entertaining to watch (and often have been). But reflect on what I said earlier: The academy is a trade organization, whose mission is to cast the American film industry in the best possible light. That, more than anything else, is why “Lincoln” – a shining example of middlebrow-serious Hollywood filmmaking -- remains the prohibitive favorite in almost every big category, and could easily wind up sweeping a near-record number of awards.

Here’s what we know for sure after the Globes, and most of it is stuff we already knew: Daniel Day-Lewis will win best actor, and best actress will be a tight race between Jessica Chastain ("Zero Dark Thirty") and Jennifer Lawrence (“Silver Linings Playbook”). Anne Hathaway will win best supporting actress, for actually being able to sing, tolerating extreme close-up well and rocking a pixie cut that made every woman in America fall for her, in that weird girlfriend-y way that guys will never understand. Christoph Waltz might supply the main competition for Tommy Lee Jones in the supporting actor category (my money’s still on Jones), though any suggestion that the Oscars could follow the Globes in giving a screenplay prize to Quentin Tarantino for the carnival of wretched excess that is “Django Unchained” – over Tony Kushner’s brilliant and nuanced script for “Lincoln” -- is beyond silly.

In other news, we can pretty much all forget about “Life of Pi,” and high time too. Anybody still trying to beat the Oscar drum for that candy-colored inanity is working way too hard. Jodie Foster is still gay, and still kind of mad at us for even caring. Which, honestly, we kind of don’t.