After decades of ducking the issue, a "big coming out speech" -- whether she meant to do it or not 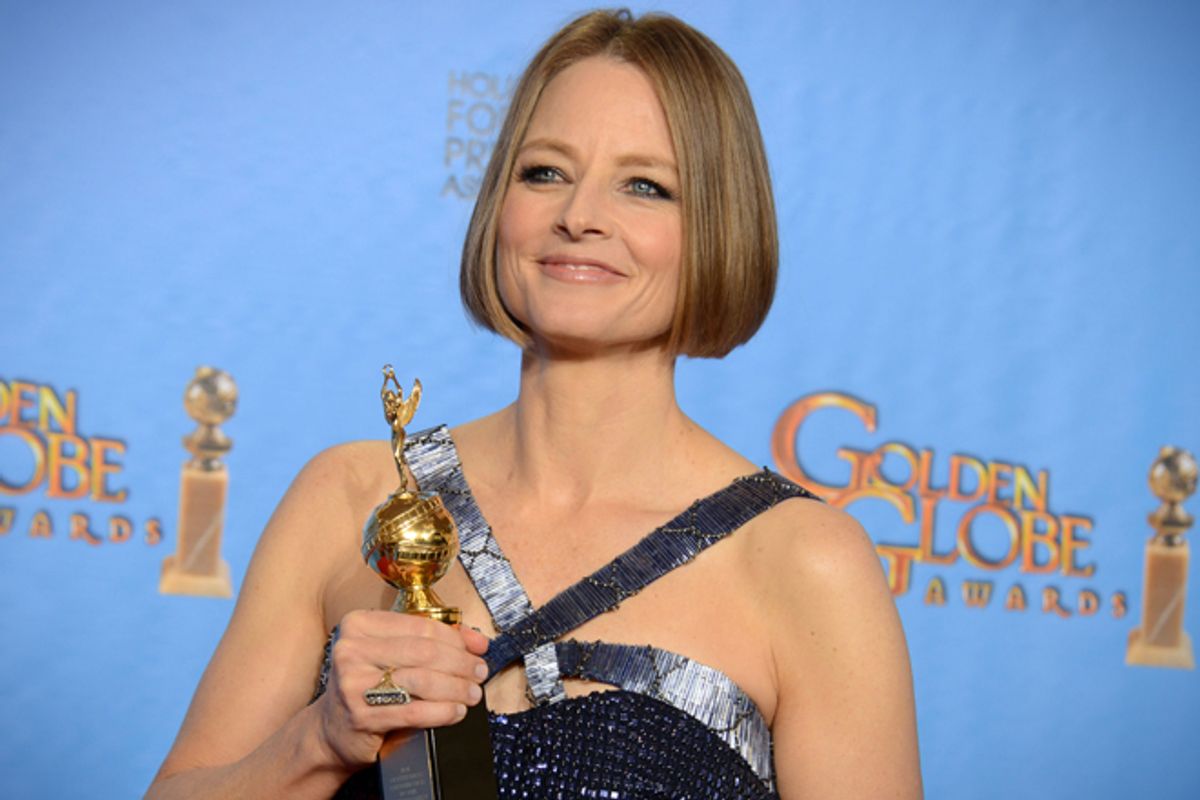 She never said "gay." Or "lesbian." In fact, as she accepted the Cecil B. DeMille Award for her outstanding Hollywood career at the Golden Globes Sunday night, Jodie Foster specifically said, "I'm not going to do a big coming out speech tonight." And this, for a woman who has spent her adult life fiercely refusing to comment on her personal life, was what coming out looked like. Instead, she explained, "I already did my coming out speech about a thousand years ago, back in the Stone Age."

It was a moment many fans assumed would never arrive at all, and one of the most unexpected things to ever happen at the Globes. It was awkward and at times angry and brave and strange. Because Foster, ever one to do it her way, didn't choose to make her declaration via an in-depth sit-down with Oprah, or an open letter to Andrew Sullivan. Instead, she mixed it into a rambly speech that seemed equal parts defiant and terrified, one in which she channeled her inner Sally O'Malley by announcing, with a swagger that threatened to turn her award acceptance speech into an impromptu keynote for the Red Hat Society, "I'm FIFTY." She did it on a night in which she sat flanked by her two sons on one side and grim-faced, acknowledged domestic abuser Mel Gibson on the other. She did it in a speech in which she confidently stated her age but confessed her nerves before saying, "I'm just gonna put it out there, right? Loud and proud, right? So I'm gonna need your support on this. I am … single. Yes I am, I am single. No, I'm kidding. But I mean, I'm not really kidding, but I'm kind of kidding."

From there, she got to the heart of her message, while remaining oblique nonetheless. She railed about how "every celebrity is expected to honor the details of their private life with a press conference, a fragrance, and a prime-time reality show" and said, while referencing "Honey Boo Boo" along the way, "If you had been a public figure from the time you were a toddler, if you'd had to fight for a life that felt real and honest and normal against all odds, then maybe you too might value privacy above all else. Privacy. Someday, in the future, people will look back and remember how beautiful it once was."

Privacy is indeed a beautiful and increasingly scarce commodity. But the scary, difficult, complicated thing about it is how differently that word and the privilege it implies can be applied to different people. When it comes to love and family and the essence of a person's identity, what's privacy — and what's secrecy? There's a courage required to create boundaries, and there's another kind of courage required to live openly. And Foster, on Sunday night, struggled to find her place within that matrix with a candor and vulnerability she's never before displayed.

In her wise and entertaining "How to Be a Woman," author Caitlin Moran explains her test for feminism and gender equality: She looks at an issue and asks herself whether men have to worry about it. A similar litmus can be neatly applied to LGBT issues. If you can consider a situation and ask yourself if straight people have to deal with this stuff, you can usually get to the heart of how far we still have to come. Picture Ben Affleck up there, winning for "Argo" and expressing concern that he might be making his publicist "nervous" by thanking Jennifer Garner. Imagine George Clooney and Julianne Moore, Foster's generational contemporaries and still very much at the top of their games, contemplating a career future "so quiet and delicate that only dogs can hear it whistle." Imagine Foster's fellow former child stars Drew Barrymore or Joseph Gordon-Levitt spending years conspicuously silent about the person they regard as "one of the deepest loves of my life, my heroic co-parent, my ex-partner in love." Or even feeling the need to.

Foster's speech – with its additional apparent announcement of a new career direction and a touching expression of gratitude to her mother, who has dementia — drew tears from the celebrities in the room, and no doubt even more in living rooms across the world. It was a big day, one that prompted Michelangelo Signorile to declare, "It means: We won big — activists, the LGBT community, all of us, over decades. And the closet lost, big…. No one can stay closeted anymore."

Now, there's one less person in the closet in the world, and that's a big thing. And 24 years after accepting her first Oscar by saying, "There's love and work and family," Jodie Foster finally gave her most complete picture of what those things look like to her. Yet there's a bigger day still coming – the one in which standing up and saying who you are and who you love isn't considered a brave or momentous act at all, because it'll be so commonplace and expected. A day in which basic human rights aren't a grueling battle. A day in which "gay marriage" is called just marriage, and love is just love. A day in which there's nothing to be nervous about.