The resentment toward the "Girls" star was in full force at the Globes. Why do people begrudge her her success? 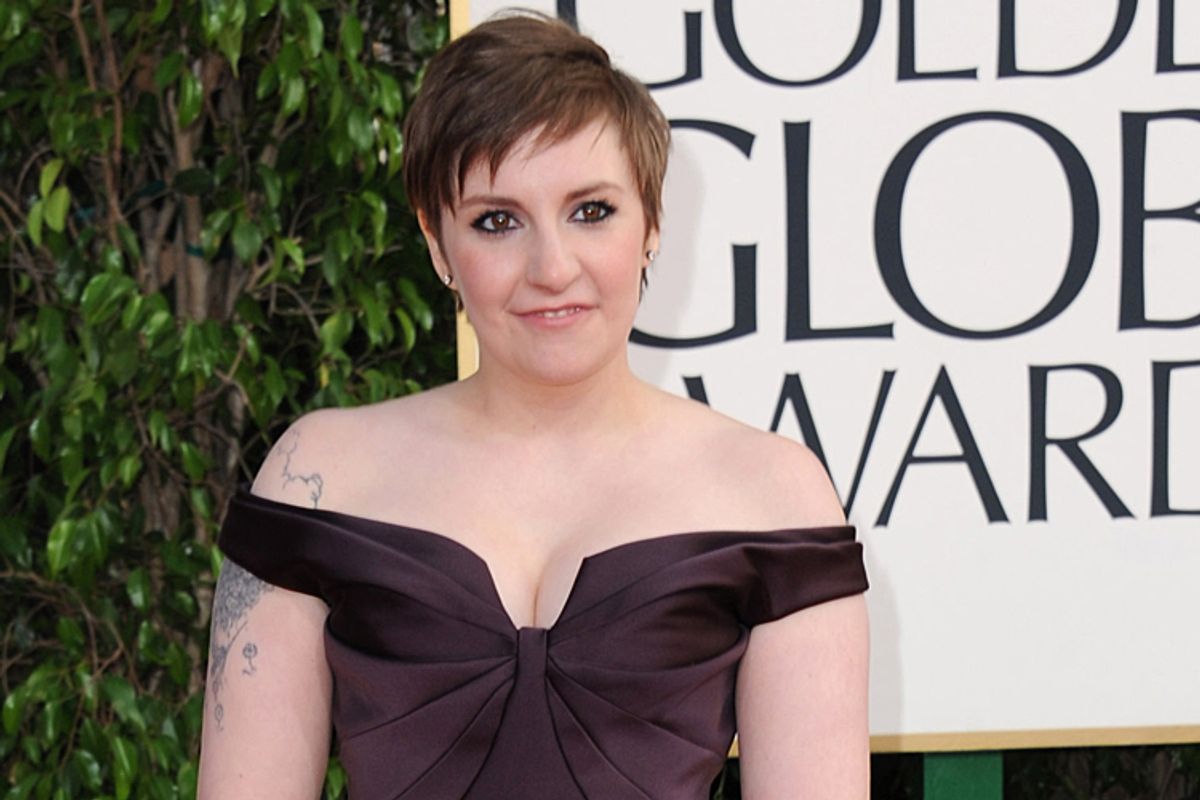 I couldn’t help noticing last evening, as I cheered for Lena Dunham, who won two Golden Globes, that those around her were decidedly less enthusiastic. Chilly even. I understand that no one likes to lose or see their friends lose, but faking some gracious smiles (you are supposed to be actors, after all) would have been nice. As well as appropriate, given that Dunham is clearly a talented young woman with great promise. I’d think that everyone in that room, knowing how the business works, would go out of their way to applaud the young and gifted Dunham if for no other reason than they might want to ask her for a job one day. If for no other reason, ladies, than she’s a young woman making it in a world still dominated by old men. And, hopefully, not being of a generation where women have felt pitted against each other — token against token — she will be good for the "girls."

It’s not just the Golden Globes. I can’t recall another writer/actor who has attracted so much hate from those in the media. I understand the resentment about her advance (see Rob Spillman's piece in this very publication), but lots of writers receive outsize advances. I have yet to hear anyone react to the news of an advance with, “Yep, that seems about right.” It would be great if the writers and books that deserved the most money got it — ditto the same amount of attention and praise. And all the gripe-storming about how slight her book proposal was, and how she’ll never make back her advance — when did we start reviewing book proposals? When did writers start caring so passionately about publishers recouping their losses?

I hear the charges of nepotism, but seriously? The entertainment industry is not a meritocracy. From before the days of Barrymore to our present age of Bacons and Bridges, Sheen-Estevezes and Zappas family has, for better and worse, equaled opportunity. The Coppola family’s connections and influence are so vast they’d make the mob envious. It’s not right, but doors swing open more easily for some than others. Does it matter whether it’s your father, neighbor or the casting agent you fucked who opened it?

I hear the diversity criticism. However, to suggest that "Girls" — a show whose charm lies in part in its documentary-like feel — presents the universe these young women inhabit, working in publishing and the arts, as rich in racial diversity, would be, sadly, to lie. Besides, did anyone ever kvetch about Jerry Seinfeld’s lack of Asian friends?

Yes, Dunham is a baby (although none of the other nominees is exactly edging into advanced age). I think it would have been swell for Amy Poehler or Tina Fey to win last night, given the quality of their shows and the innumerable accomplishments and contributions they've made to the world of comedy — gender aside — over the years. As Dunham pointed out, these two, together with the very funny Julia Louis-Dreyfus, have served as role models for lots of funny young women since her middle school days. (Yes, I admit I did cringe at that.)

I’d argue that Dunham’s youth is less a problem than her gender. I keep thinking about Dunham's acceptance speech last night: "This award is for every woman who felt like there wasn't a space for her. This show has made a space for me."

It’s true. The show has provided a space to feature the experiences of young women whose lives the culture derides as insubstantial, to assert their value and do so with great humor.

Dunham made a space for herself. She had help — as we all do — but she made it. It may sound trite, but I do hope that the validation she received last night for her work will inspire other female writers and actors to persevere, take risks, and, believing that a space exists for them — a bigger space thanks to Dunham — succeed. Maybe next time those haters and backbiters will smile genuinely when she accepts her next award, and years later elbow her when she is thanked from an awards stage for having been an inspiration to the winner since she was in diapers.