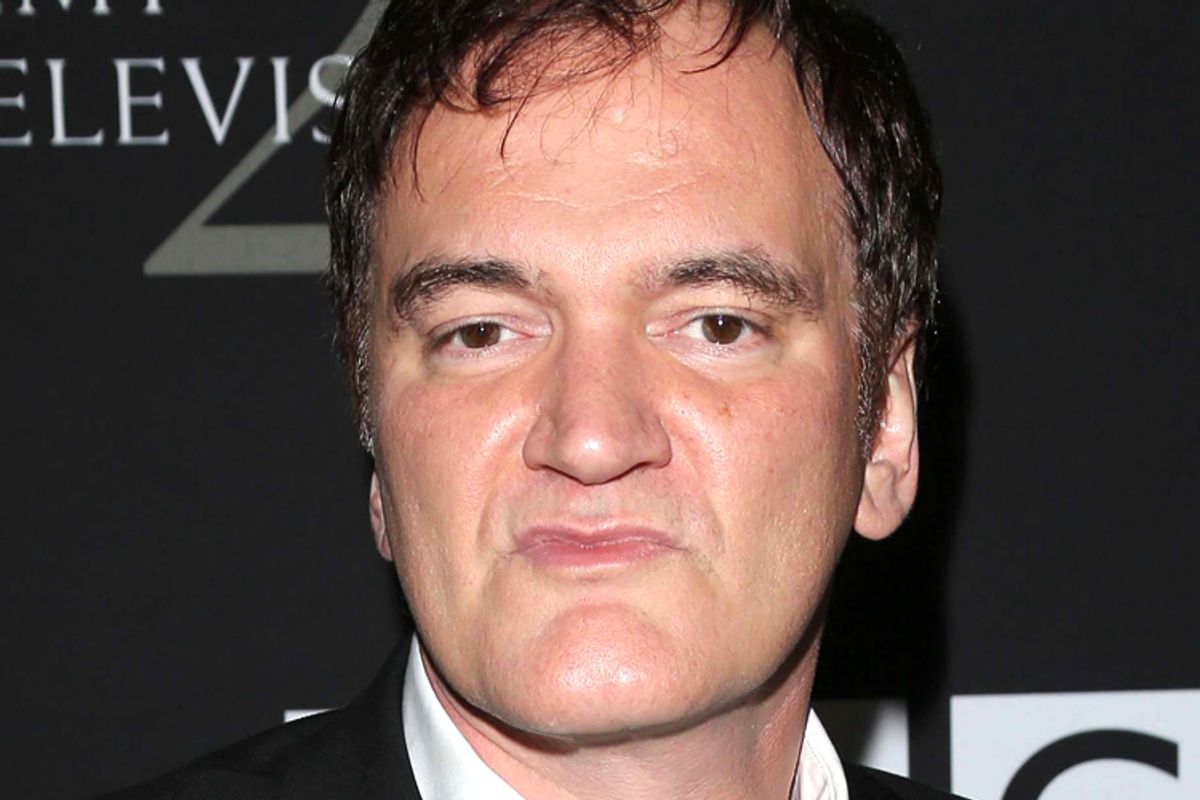 In a career spanning over two decades, Quentin Tarantino has made abundantly clear all the things he greatly loves to insert into his films. Epic bloodshed. Pop culture references that show off the breadth of his knowledge of cinema. And the word "nigger."

Boy, does he love to give his characters the chance to say that one. Think Dennis Hopper's coolly manipulative speech about Sicilians in "True Romance."  The dead body storage problem in "Pulp Fiction." Steve Buscemi's attempt to break up a fight in "Reservoir Dogs." And boy does it reliably tick people off. So fond is Tarantino of the word that it's a wonder it took him so long to figure out that if he made a movie set in the plantation-era South, he could deploy the word all the time, because, you know, history. So it should have come as zero surprise to anyone that after winning a Golden Globe Sunday evening for his epithet-laced "Django Unchained" screenplay, he would then use the word to talk about the controversy about using the word.

The Hollywood Reporter noted Sunday that while backstage discussing his winning screenplay — the screenplay that uses the same word over a hundred times -- Tarantino drew "audible gasps" from the press. Yet the exact, "N-word" deploying sentence that so shocked the press wasn't even quoted. Gosh, it must have been really terrible. Instead, the Hollywood Reporter mentioned that Tarantino had defended his screenplay, saying, "They think I should soften it, that I should lie, that I should massage. I would never do that when it comes to my characters." And as the story was picked up around the usual media outlets, it was merely noted that Tarantino had said the dreaded "N-word."

This wasn't the first time Tarantino has created controversy for his vocabulary. Almost 16 years ago, Spike Lee griped about "Jackie Brown," saying, "Quentin is infatuated with that word. What does he want to be made -- an honorary black man?" More recently, he called "Django Unchained" "disrespectful to my ancestors," proving Lee hasn't developed any new fondness for the director over the years. More bluntly, erratic comic Katt Williams recently offered to take his fist and "put it right in his mouth."

Whatever you think of his films, it's obvious that Tarantino is passionate about telling stories about characters of different races, and the way that race factors into how they talk and fight and work together. And he's not going to tell those stories in a decorous, Steven Spielberg style. He's going to do it in a way that provokes threats of punches in the face, and in language that so spooks reporters they can't even directly quote him for fear of offending people.

The question of whether Tarantino tells those stories successfully shouldn't come down to whether he's allotted a certain number of N-bombs in his career. And having characters speak in a ways that are ugly or offensive is pretty much the point. As "Training Day" director Anton Fuqua noted last month, "We’re supposed to find some truth in films and if you set a film in the 1850s, you’re going to hear the word 'nigger,' because that’s the way they spoke then, and you're going to discuss slavery because that was part of the reality," And he added, "I want my kids to hear those kinds of words in the right context, so that they'll know that language is not OK."