Do today's gays have it too easy?

Twenty years ago, gays were united -- and politicized -- by AIDS. The new gay generation barely remembers it 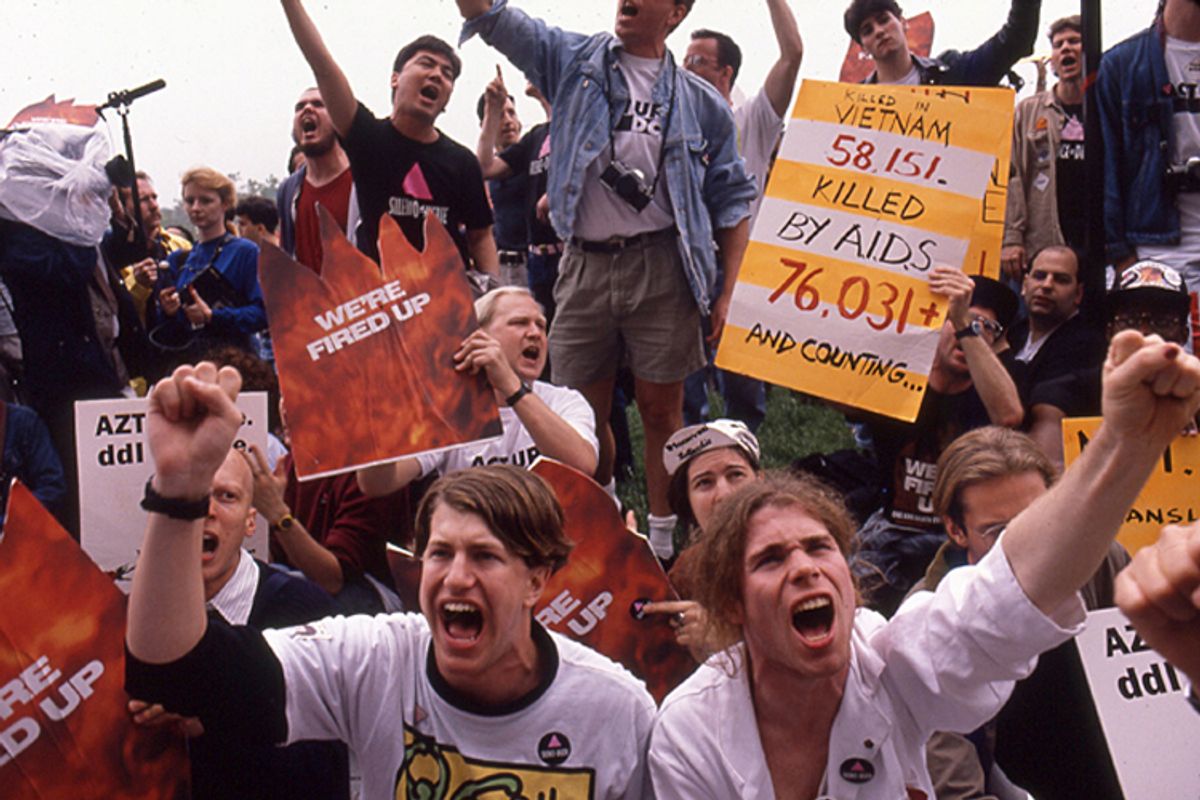 A scene from "How to Survive a Plague"
--

"I look at 'How to Survive a Plague' and, in some ways, I’m jealous," said Carl Siciliano, executive director of the Ali Forney Center, which serves at-risk homeless gay youth.

"How to Survive a Plague" is a nonfiction film — nominated for the best documentary feature Oscar — that depicts the early years of the fight against AIDS, specifically the activism undertaken by groups like the radical movement ACT UP to get attention from an establishment more comfortable turning a blind eye.

There's little enviable, it would seem, in their life-or-death fight. And certainly the environment today for gay men — who enjoy all the comforts straight people presume and enjoy in some parts of the country — is far friendlier. And yet there was a political galvanization during those years, at least judging by the kiss-ins and screaming denunciations of former New York City Mayor Ed Koch in "Plague," that is lacking today.

"When I think about the parallels, the differences — people do have a lot more inside access and everybody’s not going to die. [Causes today are] not going to generate the same enthusiasm," said Siciliano.

With the AIDS crisis still raging but no longer a daily fact of life for many gay men, and with even pie-in-the-sky issues like marriage equality and the right to serve in the military trucking along, has the gay community lost something as it’s entered a new and more mainstreamed generation?

Maybe it's simply a sign of the times: The fight has gone out of a generation told that anything is possible, no matter who you are. "Hasn't all identity politics hit a wall?" said "Plague" director David France. "Feminism as identity politics is nothing like it was in the '70s and '80s, the way we talk about race is all kind of blurred now. I don't know how to describe the period we're in, but it's post-identity politics."

Which makes sense: At the peak of her fame in the late 1980s and early 1990s, Jodie Foster was fiercely protective of her privacy. In 2013, she's free to come out, sort of, in a roundabout fashion that likely read as gibberish to awards-show-watching young people unsure why anyone would ever bother to be closeted. (The current vogue looks more like Nate Silver both acknowledging his sexuality and denying any tie to community or tradition as he declares himself "ethnically straight" in Out, or Anderson Cooper polishing his bourgeoisie bona fides by citing the love of his family and others while coming out.) Joe Biden cited "Will & Grace" as the artwork that made widespread acceptance of gays possible, but today's homophile NBC sitcom "The New Normal" isn't (just) about cosmopolitan, swishy gays but, well, "normal" dads. Gays are in the mainstream, and there's far less against which to fight.

It's that quest to be accepted as normal that has defined the modern battle post-epidemic, and it isn't something worth fighting in the streets over. Not that there's even a centralized place from which to launch a battle. While ACT UP hardly represented the views or tactics of every gay man of the time, it was a launching pad for sweeping social change. "The most frustrating part for our community," said France, "is this idea that we don't have single places to find one another. The idea of the community center: It was the Grand Central of homosexuality. Everyone was there. You couldn't go two or three days without being there. You needed to go in person, to be with your people. We don't have that anymore. We have social networking."

The rise of the app Grindr, for instance, has removed the romantic imperative of meeting new people through shared interests; more pressingly, Facebook and its ilk have obviated the need for gay enclaves at the moment external pressures made such enclaves obsolete, anyhow. David Halperin, a professor of history and theory of sexuality at Michigan and the author of "How to Be Gay," cited rising real estate prices and gentrification as central to ending the primacy of neighborhoods like New York's Chelsea and the West Village among gay men.

"The world that made possible ACT UP -- that world has been destroyed," Halperin said. "There is no place now for a diverse gay population to live all together, even if we wanted there to be." As the gay neighborhood has faded due to external factors, its decline has led to generations who don't see gay protests on the evening news and are less interested in gay separatism. The cycle fuels itself.

Dispersed among heterosexual friends and classmates rather than able to choose a homosocial group of friends and compatriots, young gay men have adopted some of the same ambitions as their peers -- and Halperin, whose book is on the gay traditions passed down from generation to generation (think heightened aesthetic sensibility and glamour worship), doesn't see that complacency as a good thing. "I do think there is a loss when gayness becomes completely depoliticized, cut off from any political movement. It’s not as if we lack political causes nowadays. What we lack is political mobilization."

Siciliano, the Ali Forney Center director, was careful to note that young people had been helpful in fundraisers and enthusiastic about the cause. But the degree of mobilization simply isn't comparable; the 1980s is now another country altogether. "We don't have to function outside. Then, folks kind of had to be radicalized. But today, in New York, the speaker of the Council [Christine Quinn, an out lesbian] is the most powerful person in the city. Big corporate law firms and banks all have affinity groups. People are forced to work within the system."

In another sign of the times, "How to Survive a Plague" hasn't just been embraced by the academy that denied "Brokeback Mountain" the best picture Oscar; it's been embraced by its own villain, the unresponsive, unfeeling gay movement bête noire, Ed Koch. Koch reviewed the film positively and urged the city's chancellor of education to screen the film in schools and the president to give ACT UP leaders the Presidential Medal of Freedom. "Koch would have jailed [ACT UP] if he had Hugo Chavez's powers," said France. "If he were Putin, he'd have thrown them into Pussy Riot's tomb. How the mainstream comes to love the radical fringe -- they should teach that in college."

The post-AIDS generation's failure to meaningfully unite may help make the movement more cuddly and "New Normal" and less likely to act up in a manner disturbing to those in power. "Before AIDS, we were divided," said France. "AIDS, as horrible as it was, stripped those away. And when that campaign against us lifted, we had the luxury of returning to our lives. For better or worse."