"Amish Mafia" exploits the traumatic aftermath of a massacre as entertainment. Can reality TV stoop any lower? 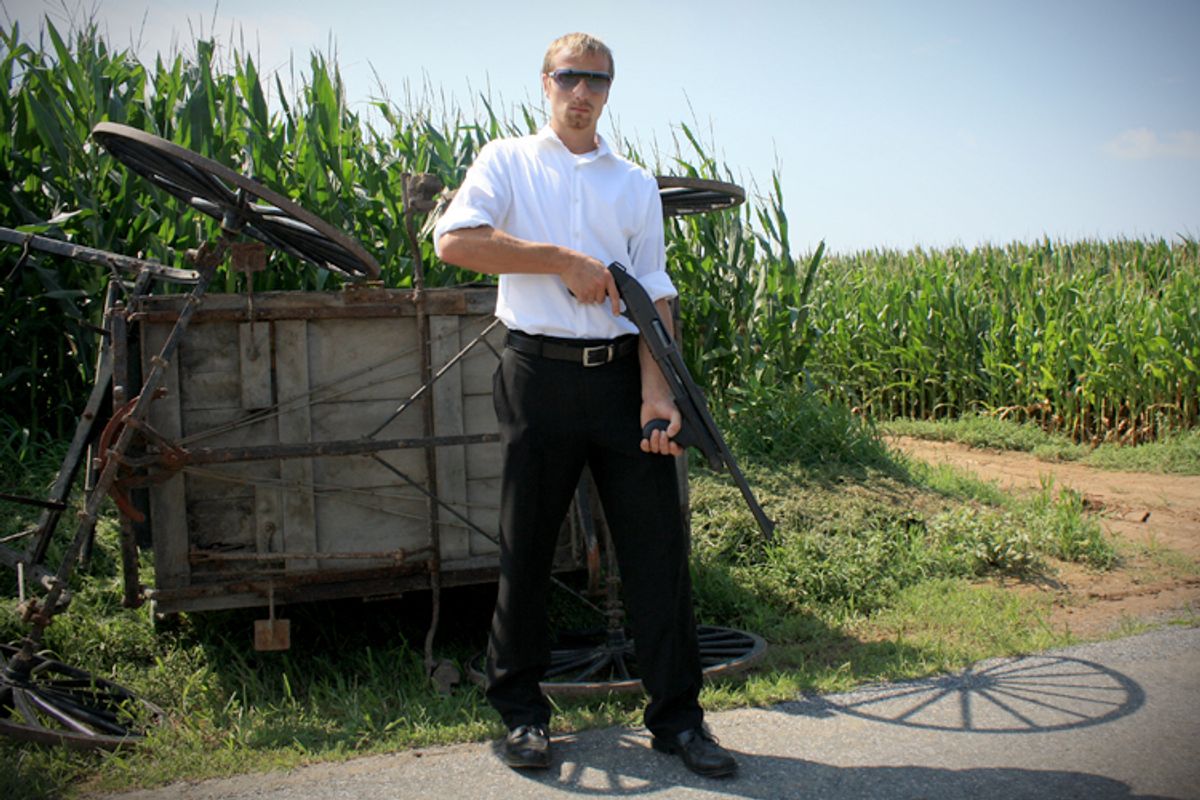 “Amish Mafia,” the popular Discovery Channel series that I first wrote about when it debuted in December, has prided itself on its authenticity: Nearly everyone in Lancaster County, Penn., where the show is set, knows – or knows someone who knows – a cast member or someone who worked on the show (often, as has been claimed to me, with the enticement of free booze) or who works at a business featured in the show. But any local, even one who doesn’t have a connection to the program’s production, can tell you: Amish guys wielding guns and sledgehammers in broad daylight isn’t a regular feature of county life.

Which is not to say portrayals of Amish criminal behavior couldn’t be true. Of course, the Amish are no more immune to vices and temptations than are any other group. Donald Kraybill, an expert on the Amish at Elizabethtown College, points to the 1998 drug bust of a group that included members of the Pagans motorcycle gang along with two young men from the Lancaster Amish community as the spark that fueled media interest in Amish behaving badly and led to the torrent of Amish documentaries and reality shows focusing – with varying adherence to the truth – on less noble aspects of the community.

But selling the Amish – with and without “gone wild” – dates back further and is more widespread than just reality TV. The Amish have long been used to market everything from tourist destinations to paperback novels to space heaters with specious efficiency claims. In just the few weeks since “Amish Mafia” has been on air, Lifetime has aired a new original movie “An Amish Murder” starring Neve Campbell, and Cinemax premiered “Banshee,” an Alan Ball drama set in Amish Country.

Since the 1998 drug bust, not only has interest in wayward Amish exploded, but so too has reality TV in general. And increasingly, fictitious and invented content is presented as reality. Where straight-up documentary-style glimpses into quirky subcultures or lifestyles used to exist, scripted material now increasingly fills the space. However, such shows still find value in actual reality, using the real names and bios of their casts and drawing on other real-life information and events. The gold standard for the most exploitative seems to be getting subjects to lend their real identities and backgrounds to projects that make them appear as embarrassingly flamboyant, foolish or lawless as possible.

True to this form, “Amish Mafia” uses the trappings of a reality show to give us instead what amounts to an action soap opera, complete with intrigue, romance and betrayal – with ample doses of lowbrow humor such as “cow-patty bingo” and a three-person toilet in an Amish home. It’s clear “Amish Mafia” is a scripted program with delineated plots, more similar to “The Dukes of Hazzard” than to “Cops.”

But while other shows masquerading as reality TV may be just as scripted, “Amish Mafia” probably stands apart in how far removed from reality it actually is. Case in point: No arrests have been made due to the show – even with its repeated instances of destruction on public roads and admissions of scores of other crimes.

West Virginia Sen. Joe Manchin hit the airwaves to condemn MTV’s new show “Buckwild,” whose aim seems to be to depict young people in his state as unflatteringly as possible (like Amish, poor Appalachians seem to be easy prey). Manchin began speaking out before the show even aired; people have pretty good intuition for when they are on the receiving end of bigotry. Similarly, even “Jersey Shore,” MTV’s tamer “Buckwild” predecessor, which ran for six seasons, found itself publicly condemned by New Jersey Gov. Chris Christie, who criticized its depiction of life in his state and used his office to stop the show from getting a tax break.

There hasn’t been the same high-profile condemnation of “Amish Mafia.” Then again, the Amish don’t have their own state – or many people willing to speak up prominently when they are treated unfairly. (To his credit, U.S. Rep. Joe Pitts once led an effort to criticize the 2004 reality series “Amish in the City.”) But however unwelcome and distasteful depictions in “Jersey Shore,” “Buckwild” and similar shows may be, “Amish Mafia” breaks new ground (nothing new in the world of Amishploitation) by ever so casually weaving real-life tragic, violent crime into the plot.

The show’s use of two particular recent news stories makes “Amish Mafia” perhaps the TV series with the most offensive back story ever: The 2006 school shooting in Nickel Mines, Penn., in which five children were murdered and five others were injured (all the victims were Amish), is given at the outset of the show, as well as on the show’s website, as the outrageous raison d'être of the Amish mob. If the show’s characters were actually in the business of guarding Amish schools, it might make sense. But not even the NRA’s Wayne LaPierre could make out whether these were the good or bad guys. Discovery’s Amish thugs are engaged in everything from extortion rackets to illegal fight clubs to horse-and-buggy drag races.

Not only is profound and sad disrespect shown to the tragedy’s victims by the show’s use of the massacre, but the idea that a criminal gang would spring to prominence in the wake of the tragedy with the implicit approval of the traumatized community to pursue its cartoonish crimes is ridiculous.

And in the third episode, viewers meet Merlin from Ohio’s Holmes County (like Lancaster County, an area with a large Amish population). The show implies that Merlin has been in competition with real-life hate-crimes convict Samuel Mullet Sr. to be the leader of the Amish in Ohio. Mullet is the cult leader who instructed his members (when he wasn’t sexually and psychologically abusing them) in 2011 to launch religiously motivated physical attacks on Amish families in Ohio and Pennsylvania and now awaits sentencing in February in which he faces up to life in prison.

To compete with Mullet’s crimes (the show seems to suggest going off the rails is viewed as a key leadership attribute by Amish people in Ohio), the show makes Merlin a martial arts black belt who ominously keeps a rotary saw in the woods, describing him as “hardcore crazy.” As if to drive home the point that he’s indeed ready to fill the shoes of hate-criminal Mullet, when Merlin shows up in Pennsylvania as an uninvited guest at an absurd buggy-pimping contest as part of his quest to extend his territory, he proclaims, “This is Ohio Amish!” while appearing to pour liquor on a horse.

Take any other combination of hate crime and mass shooting from today’s headlines and picture them featuring in a piece of entertainment in the mold of “Amish Mafia” a year or two from now. The outcry would be huge. People would be calling for apologies from the network and for the show’s sponsors to pull their support. It’s not hard to imagine public anger forcing the cancellation of the series and the people behind it into hiding.

It takes a complete lapse in moral and critical thinking to accept gunned-down schoolchildren and violently attacked hate-crime victims with your entertainment. But it takes a lot more than that to create such content in the first place.

Amish and Mennonites – from whose communities the cast of “Amish Mafia” come – emerged out of Europe’s Anabaptist movement, which emanated out of Switzerland in the 16th century. Amish are named for Jakob Ammann, Mennonites for Amman’s forerunner, Catholic priest Menno Simons. Both Ammann and his 17th-century contemporary Hans Reist were successors to Simons, but Ammann considered Reist and the Mennonites to have gone soft on matters of discipline and went his own way. (You’re excused if your pop-culture miseducation causes you to imagine these religious leaders as rival mob bosses.)

Modern-day Anabaptists, especially in places like Lancaster County, exhibit interaction and movement between the orders. My grandparents entered Rumspringa as Amish youth and came out as Mennonites – a not uncommon transition.

In Europe, Anabaptists were tortured and killed for their nonconformist beliefs and practices by their Catholic and Protestant rulers. This persecution, along with years of lower-level harassment, is the key reason why Amish Country isn’t found in Germany or Switzerland, but in America. The Amish and Mennonites aren’t unique for the reasons that brought them to the New World.

If harvesting the entertainment value of society’s outliers is Western culture’s 21st-century answer to the torture, extermination, forced conversion, enslavement and forced relocation of previous centuries, perhaps that’s one form of progress.

But “Amish Mafia” goes way beyond simply milking the quirks of a unique subculture. Reality programs “Ice Road Truckers” and “American Chopper” did a good job of that. “Amish Mafia” actually manages to employ a real-world massacre and string of hate crimes – revictimizing the already victimized – for what’s ultimately comedic value. Millions watch, but nobody seems to care.

If the Amish really did depend on a “small organized group of men for protection and justice” as the show would have you believe, “Amish Mafia” creator Eric Evangelista and his Hot Snakes Media production company, the Discovery Channel, and the show’s advertisers would be at the top of the group’s list of items requiring attention. The people behind the show should feel lucky their “hardcore crazy” vigilante Amish mobsters are just creations of their own twisted imaginations.