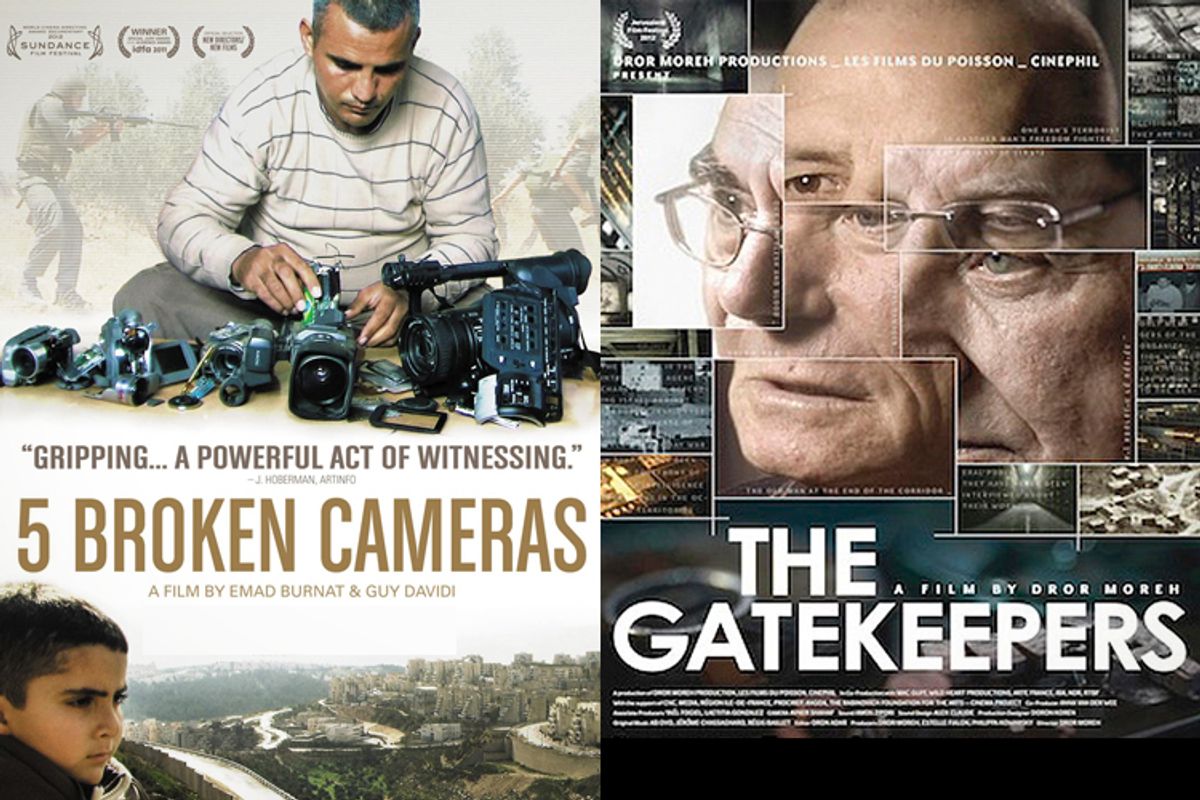 It’s no secret that Israel has an image problem, to put it mildly. From unabated settlement construction in the West Bank infuriating the international community and eliciting repeated condemnations in the U.N., to Prime Minister Benjamin Netanyahu’s bellicose approach to Iran that has strained relations with the Obama administration, to Israel’s consistent disregard for Palestinian human rights, Israel is one of the most divisive subjects in international politics and media. At next month’s Oscar ceremony, that “image problem” will be on prominent display as two local films centered around the Israeli-Palestinian conflict and highly critical of Israel are up for nominations in the best documentary category.

"The Gatekeepers" – an Israeli/French/Belgian production directed by Israeli Dror Moreh – takes the audience into the world of Israel’s anti-terror operations since it assumed control of the West Bank and Gaza in 1967, as told by the very men who oversaw them. Moreh, who says he is inspired by Errol Morris’ "The Fog of War," conducts in-depth interviews with six former heads of Israel’s Shin Bet (the secret internal security service, comparable to the FBI), whose candid recounting of targeted assassinations, village raids and prisoner interrogations reveal the ethical and political failures of Israeli occupation.

"Five Broken Cameras," a Palestinian/Israeli/French production (which is currently airing on Hulu), tells the story of a small West Bank village’s nonviolent struggle against Israel’s separation wall, settlement construction and military control, as told through the eyes (and lens) of Emad Burnat, a resident of Bil’in, which has become a model and international symbol of Palestinian civil disobedience.

Between 2005 and 2011, Burnat’s five cameras have all been physically damaged while documenting the Israel Defense Forces’ violent dispersal methods during weekly protests against the separation wall built on Bil'in’s lands (which was partially dismantled and rerouted last year following a 2007 Israeli High Court ruling). His footage documents routine arrests and night raids in the village, and the killing of several residents by IDF fire while they were protesting peacefully. Burnat has been arrested and shot, and in the film, his wife implores him to stop documenting for fear of another arrest. It is impossible to come away from this movie without a palpable sense of Israel’s unjust treatment of Palestinians in the West Bank.

In "The Gatekeepers," it is not Palestinians, but senior figures from the heart of Israel’s security establishment who criticize Israeli policies. The oldest and most notorious of the interviewees, Avshalom Shalom – who served as Shin Bet chief from 1981 to 1986 and was forced to resign after allegedly ordering the killing of two Palestinians terrorists apprehended after hijacking a bus in 1984 – admits that peace and security cannot be achieved only through military might. He and the others say that Israel must find a way to work with the Palestinians to find a solution. In stark contrast to current government policies and the general atmosphere in the halls of Israel’s Knesset today, all six spymasters call on Israel to negotiate with Hamas, Iran and Islamic Jihad. "In the State of Israel, it's too great a luxury not to speak with our enemies,” Shalom says. It's in the nature of the professional intelligence man to talk to everyone. That’s how you get to the bottom of things.”

Both films put Israel in the international spotlight, sending a clear message that something is very rotten in the Holy Land – not exactly the image Netanyahu and his government want to project to the world. The films constitute candid, tragic confessions of what reality is like on the ground, snapshots of the recent history of Israel/Palestine – one through the perspective of the occupied, and the other, the occupier; one, a grass-roots compilation of rough amateur footage showing civilians going up against a massive army, the other a sophisticated amalgamation of archival footage and digitally re-created imagery that exposes the inner workings and downfalls of some of Israel’s most covert security operations.

The films went largely under the Israeli media’s radar until the Oscar nominations were announced last week, despite both receiving numerous awards and international accolades (among them, "The Gatekeepers" was selected best documentary by the National Society of Film Critics in the U.S., and "Five Broken Cameras" won the World Cinema Directing Award at Sundance). Now headlines in Israel abound with news of the “unprecedented” Israeli achievement. Those on the left stress that it is only thanks to the paucity of dissidents that Israel can salvage its reputation abroad and still have something to be proud of, while those on the far right have gone as far as calling both films “pro-Arab” and even condemned them as “Palestinian propaganda films.”

Responding to the nomination, "Five Broken Cameras" director Burnat said, “This is one of the happiest moments of my life. The village of Bil’in is celebrating international support of my film.” His Israeli co-director Guy Davidi also welcomed the news, but noted the complexity in accepting the recognition. Since the nomination was announced, the Israeli and American Jewish media have co-opted "Five Broken Cameras" as an Israeli film, when it is, in fact, as Davidi notes, “first and foremost a Palestinian film,” but adds, “not that a film should have any citizenship at all.” Davidi hopes the story of Palestinian nonviolent struggle will not only circulate around the globe, but also reach Israeli youth gearing up for their army service. He is trying to organize independent screenings in high schools, since the Ministry of Education steers clear of such politically subversive work.

"Gatekeepers "director Dror Moreh, who considers himself an Israeli centrist, is also determined to have an impact on the Israeli public. He told me the main goal of the film is to “put a mirror in front of Israeli society,” forcing it to confront the “unthinkable actions” taken in its name.  The timing of his film’s release is no coincidence. With elections taking place next week and polls indicating an even further shift to the right, with the increasing popularity of an extremist national-religious-settler bloc that does not support a two-state solution, Moreh hopes the film will make people think twice about what direction the country is headed in.

In such a hot political climate, maybe it shouldn’t come as a surprise that this region is producing some of the most biting and powerful documentary films around. On Oscar night, audiences will be witness to two testaments of Israel’s mechanisms of control over the Palestinian population that Israeli government spokespeople will have a very difficult time trying to repackage or explain away. The question is, will it have an effect on the reality on the ground in Israel?

Mairav Zonszein is a writer and editor based in Israel. She blogs at 972mag.com and is a finalist for the Anna Lindh Mediterranean Journalist Award.