I dreamt that the action star went into politics, and then staged a movie comeback at age 65. Silly, I know 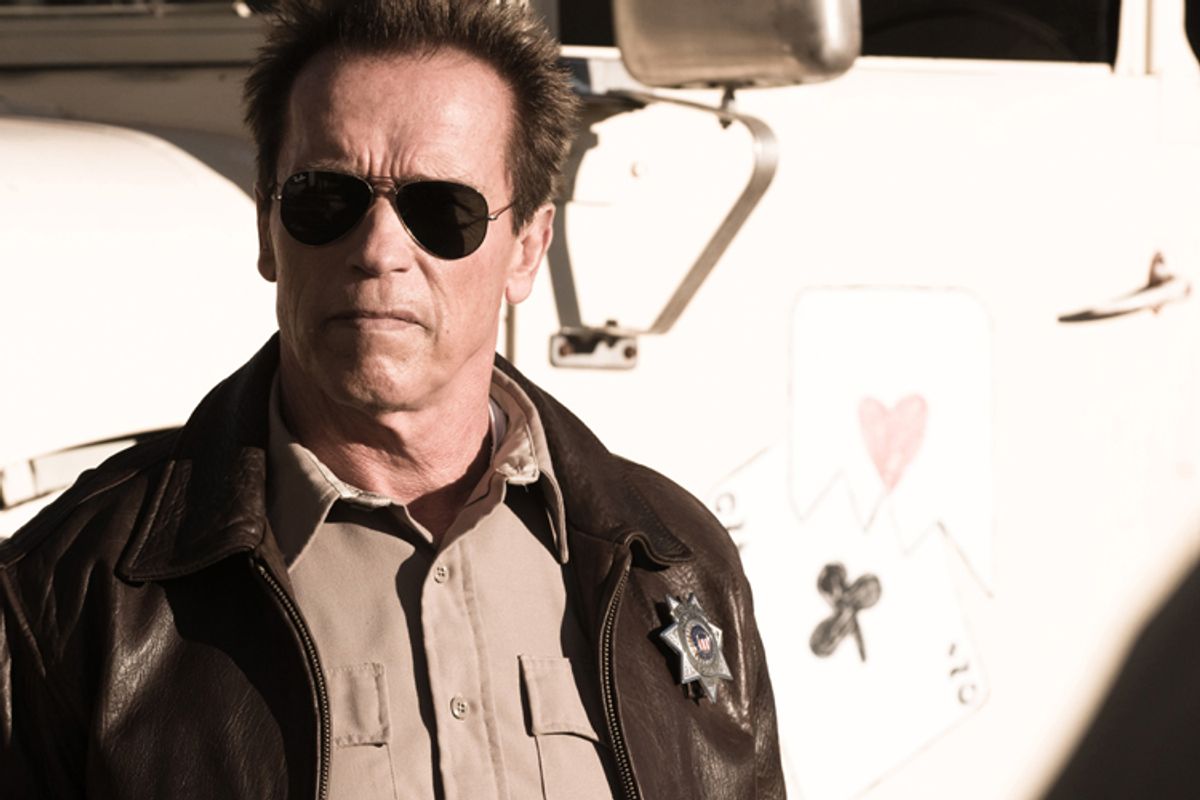 Arnold Schwarzenegger in "The Last Stand"
--

So I just saw the latest Arnold Schwarzenegger movie, “The Last Stand,” in which the 65-year-old one-time bodybuilding champ tries to stage yet another messy, jokey, meta-style comeback. This is a role very much in the mode of Clint Eastwood or Sylvester Stallone – in fact, I kept thinking that Eastwood must have made this film, sometime around 1997 – with Schwarzenegger playing a small-town Arizona sheriff forced to go mano a mano, under exceptionally unlikely circumstances, with an escaped Mexican drug lord. It’s one of those mixed-up Hollywood pictures that has too much going on: It tries to protect the action-hero status of its visibly enfeebled star and it has Johnny Knoxville of “Jackass” in a moronic supporting role and the story doesn’t make any sense and it’s the American debut of whiz-kid Korean action filmmaker Kim Jee-woon (for you film-festival geeks, he made “I Saw the Devil” and “The Good, the Bad, the Weird”).

So to call this a good movie is really a stretch; it’s more like 38 percent of a good movie. But it probably has just enough dumb fun and pointless violence and car chases to seem like a highly viable option for large numbers of people this weekend. Anyway, by this point Schwarzenegger is like an old friend who’s run a bit to seed, and who can resist that? If anything, his acting has gotten worse, which may have to do with whatever work he’s had done on that big Austrian rural rock formation he calls a face. He obviously isn’t quite the imposing physical specimen he used to be, has had some health problems and doesn’t look all that great. But you know exactly what you’re going to get with Arnold, which is ass-kicking, one-liners and a general lack of self-seriousness. Wherever and however he learned it, Schwarzenegger has always had a genial arrogance that audiences eat up: He’s gettin’ paid, he hopes we’re having fun, and he feels no need to pretend that it’s art.

Then I went home and had the weirdest dream! I dreamed that Schwarzenegger, of all showbiz people, had bailed out of his fading Hollywood career and gone into politics, during the nitrous-oxide boom years of the Bush administration. I know this sounds nuts, but in my dream he actually got elected governor of California twice, the first time in a crazy special election that cost the taxpayers of that perennially strapped state tons of extra money. Here’s the part of my dream that was weirdly almost like reality: While Schwarzenegger remained personally popular as governor, his attempts to enact a right-wing agenda totally failed, and he ended up as a bland bipartisan administrator with a failing marriage who was diminished and defeated by the inexorable realities of politics, no more able to prevail over lobbyists and entrenched interests and legislative gridlock than anybody else. He actually wound up being replaced -- in my dream, of course -- by Jerry Brown, the one-time Governor Moonbeam of my California childhood. (I was actually Brown's editor for a little while, when he wrote an opinion column for Spin magazine in the late '90s, and that was kind of weird, I can tell you. But I digress!)

If this bizarre fantasy were actually real, instead of my brain’s response to a late-night hamburger and that second can of Genesee Cream Ale, it would make the Arnold Schwarzenegger of 2013 a strange and pathetic figure, with his political career over and his days of box-office supremacy long in the past. “The Last Stand” really isn’t much of a movie, with its rote supporting roles for Forest Whitaker (as an FBI honcho), Eduardo Noriega (as the sinister Sinaloa mobster, behind the wheel of a souped-up Corvette show car) and Luis Guzmán (as Arnold’s lovable but hapless sidekick). But Schwarzenegger’s resolute performance in its capable shoot-‘em-up scenes embody the wizened, third-act-of-life defiance that Americans always love. (You just watch: Freakin’ Lance Armstrong, the lying-est cheater of all time, is gonna be dispensing sage advice to young people on TV inside of a year.) It’s almost as if a titanic, unstoppable wave of celebritude had crested, broken and receded, leaving behind a cheerful, elderly Austrian muscleman to make B-grade action movies for people to watch in January.