Just how factual is "Lincoln"? 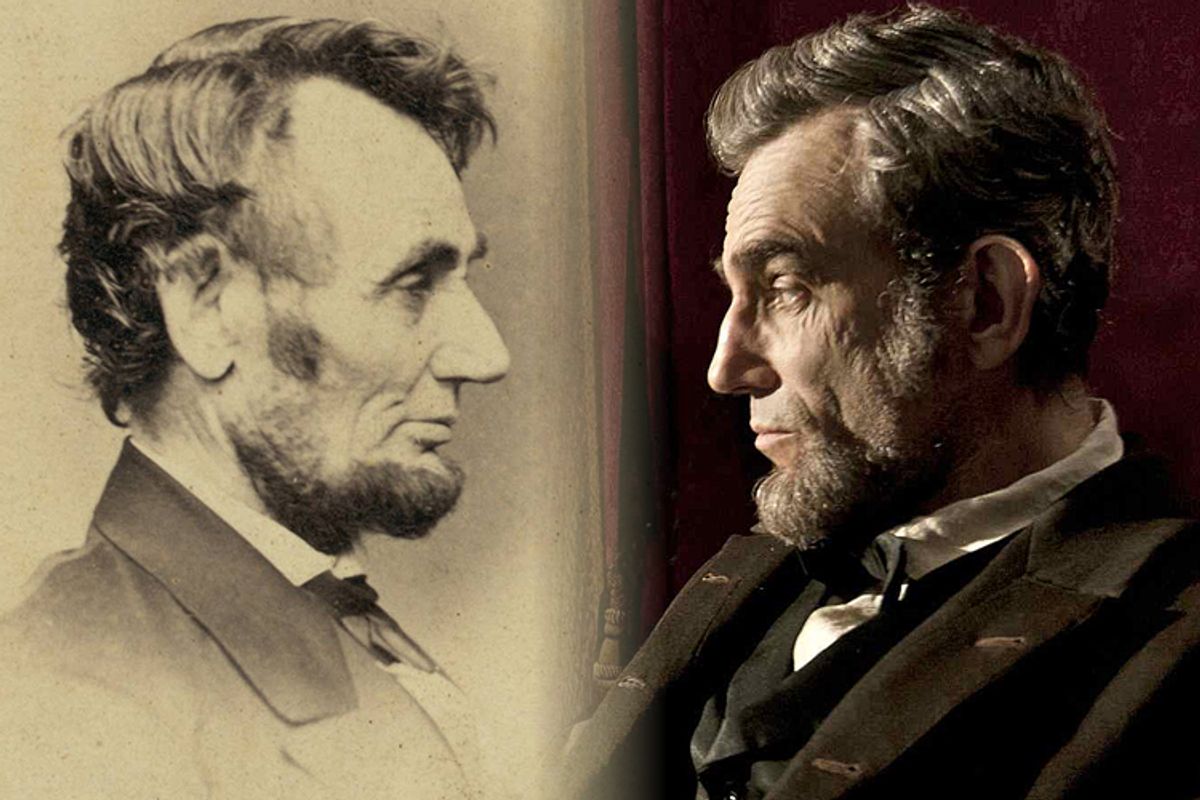 The debate over the facts in "Zero Dark Thirty" rages on, as the sources behind Kathryn Bigelow's self-proclaimed work of cinematic journalism remain obscure. Fortunately for Steven Spielberg, his film has not been the target of media scrutiny. But while "Lincoln" arguably leads the field for the best picture Academy Award and is a huge financial hit, there are historians who believe the film paints a simplistic view of the Great Emancipator and the process of passing the 13th Amendment.

"It coheres, in some ways, very well, and, in some ways, not so well," says Bruce Levine, a historian from the University of Illinois who just published the well-received Civil War history "The Fall of the House of Dixie." "I give them a mixed review."

The film's focus on a narrow period of history — from after the 1864 election to Abraham Lincoln's assassination — necessarily overemphasizes Lincoln's role in ending an institution that was nearing its death, said Levine. "There are fundamental gaps in 'Lincoln.' Watching the film, you don't know that by the time of the events described, slavery is already badly undermined — slaves have been running away from their masters in border states and Confederate states even before fighting began."

Indeed, Levine argues, the 13th Amendment fight that the film paints as a nail-biter was not really in doubt. "The 1864 election gave Republicans enough votes in Congress," he said, "so that when the new Congress convened, the Republicans could have passed a constitutional amendment with their new Congress ... historians are really loath to say anything is inevitable, but the passage of this amendment was almost a foregone conclusion." Sure, Lincoln's force of will in taking on slavery was admirable and instrumental in this instance — but slavery may indeed have been doomed to begin with, thanks to the abolitionist movement.

This rising tide — whereby the end was drawing near despite the film's attempts to portray slavery as a thriving institution — bothered Columbia professor Eric Foner as well. Foner, who won a Pulitzer for his book "The Fiery Trial: Abraham Lincoln and American Slavery," questioned the film's inside-the-Beltway focus for restricting viewers' understanding of just how quickly slavery was dying across the North and South. "You get no sense that the end of slavery is happening all over the place: In  the South, for instance, with armies freeing slaves, and slaves rising up to take over plantations. It was a very chaotic moment and dramatic moment. This is the worst thing you can say about a Hollywood movie: It’s kind of boring compared to the drama in the nation."

The film is based on a section of Doris Kearns Goodwin's book "Team of Rivals" dealing with the end of slavery (albeit a short section: "She must have a very good lawyer to get her name on the screen," cracked Foner). The Columbia professor believes "Lincoln" privileges psychological insight into Lincoln at the expense of a panoramic view of the national scene. "People read Doris’ book for the same reason they read Jane Austen — to get inside human character. They don't read it for the full, big, chaotic end of slavery, with a lot of historical actors."

Those actors include African-Americans, who are, as a New York Times Op-Ed argued, passive when not absent in "Lincoln": There's a brief opening scene in which black soldiers reverently recite the Gettysburg Address to the president and there's Mary Todd Lincoln's confidante Elizabeth Keckley, who is portrayed as a quietly strong seamstress, though in reality, she raised money for newly freed slaves. Said Foner: "She was political, she was out there in the streets doing something. If you go to the other extreme, with 'Django Unchained': That’s a total fantasy, but at least it’s got black people as historical actors."

"Lincoln" can best be understood, perhaps, as an example of Hollywood's quest for truth, limiting its scope to known knowns -- Lincoln did, in fact, preside over the rough-and-tumble passage of the 13th Amendment, and was indeed a forcefully charismatic and visionary individual -- while eliding that which is more complicated. Peter S. Carmichael, the director of the Civil War Institute at Gettysburg College, praised the film for depicting the process of arm-twisting and vote-buying that went into passing the law. "Today, cynicism prevails because there’s no sense of history and how our system functions. When people confront corruption today, they think we somehow lost the purity of our government. 'Lincoln' should remind people that democracy is impure, hopelessly corrupt, but out of that can come powerful and inspiring change."

And historians acknowledge that to vociferously fight Hollywood history would be an uphill battle, and not a very enjoyable one. "The historian is known as a killjoy," said Foner. "People go to the movies and enjoy themselves and the historian comes along. One of the very good things about the movie is that it does put slavery right at the center. Nobody's going to go away thinking the Civil War was about the tariff, or whatever."

The context for the action of "Lincoln" -- the cultural climate that made freeing all slaves possible and necessary -- will remain, for now, the stuff of history books. "The existence of the movie is definitely for the good," said Levine, "precisely because it has stirred up so much interest in this very important subject. I am happy for its existence, and I wish it had portrayed history more accurately."