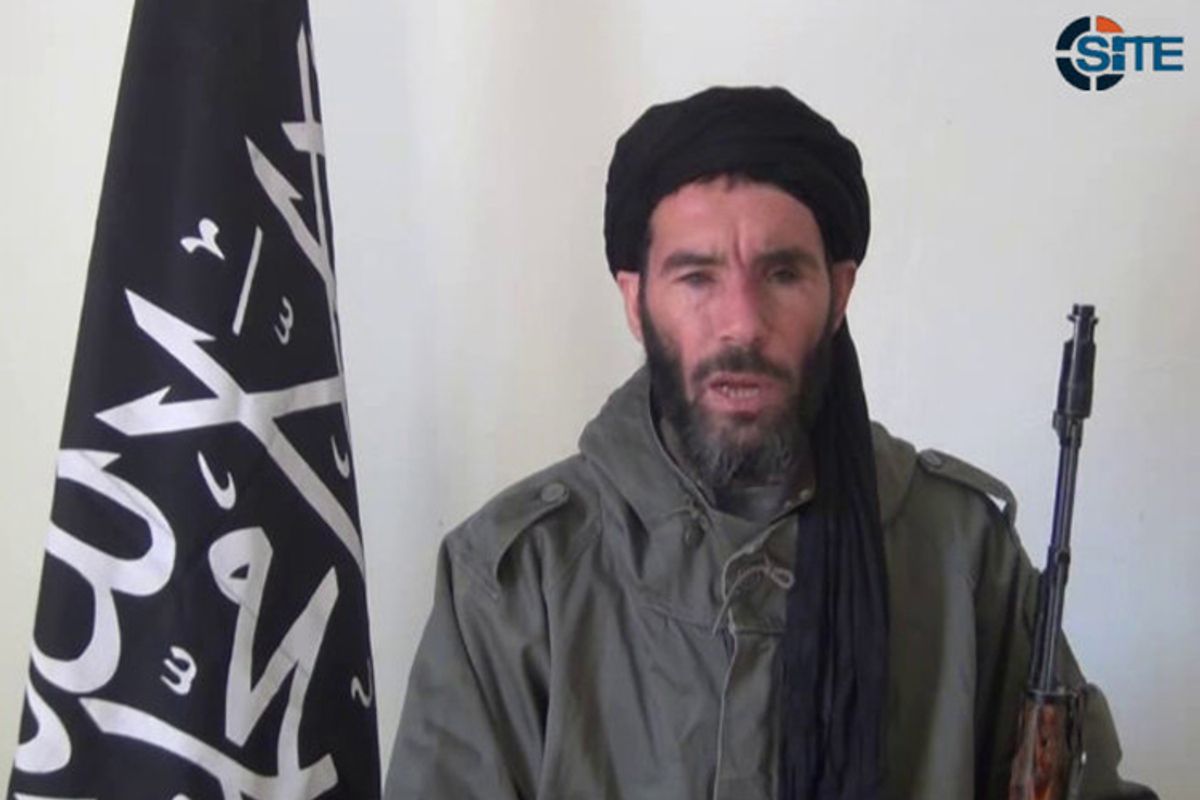 1:55: CNN reports that explosives-laden vests were put on some of the hostages, according to U.S. officials.

The White House did not specify the number of current hostages that are Americans, though a total of five foreign hostages have reportedly been freed.

CNN also confirms that a U.S. drone has been sent to the plant to monitor the situation and send back intelligence.

1:37 p.m.: ANI, the Mauritanian news agency that has been in contact with the militants, there are seven hostages remaining, two of whom are American. There are no confirmed American casualties.

The Qatar-based news agency added that Japan's Vice Foreign Minister Minoru Kiuchi, who "is now in Algeria, urged the Algerian government to put an "immediate end" to the military operation."

1:19 p.m.: Dow Jones Marketwatch, using old BP press releases,  has some background on the In Amenas field. In summary,

The Wall Street Journal's Market Watch dug up BP press releases about In Amenas to offer some insight into the history of the gas facility. The company sent a press release in June 2008 announcing the beginning of its production together with Algeria's state energy company, Sonatrach, and Norway's Statoil. Tony Hayward, the chief executive of BP Exploration and Production at the time, said, "This is a significant milestone for BP and reinforces Algeria's position as a major producer of gas and exporter."
Halliburton subsidiary Kellogg, Brown and Root and the Japanese Gas Corporation of Yokahama, Japan together made up the principal EPC (engineering, procurement and construction) contractor on the project as JGC/KBR. With the facility's American, European, and Japanese background, it comes as no surprise that these countries reportedly constitute most of the hostages' nationalities, and representatives from their capitals have been at the forefront in condemning the hostage crisis. The largely Western makeup of the gas facility most likely proved itself a symbolic target for the militants, who claim they are reacting against the French invasion of Mali.
Advertisement:

1:12 pm.: Here's a video explaining some of Belmoktar's (pictured above) background:

1:01 p.m.: Al-Jazeera English has a different take explaining that the raid was launched on a convoy, rather than the gas plant itself and goes a bit into the militants' motivation .

The fighters said they seized the hostages in retaliation for Algeria letting France use its airspace to launch operations against rebels in northern Mali .

The spokesman for the Masked Brigade, which had claimed responsibility for the abductions on Wednesday, told Mauritanian ANI news agency that the deaths were a result of an Algerian government helicopter attack on a convoy transporting hostages and kidnappers.

Algeria's Interior Minister insisted that the militants were Algerian, not Libyan or Malian, and were operating under Al-Qaeda Sahara boss Moktar Belmoktar:

Algerian media, citing officials, reported that 15 foreigners and 30 Algerians had managed to escape.

The Masked Brigade spokesman said Abou el-Baraa, the leader of the kidnappers, was among those killed in the helicopter attack. He said the fighters would kill the rest of their captives if the army approached.

Algeria has refused to negotiate with what it says is a band of about 20 fighters.

12:54 p.m.: It is worth emphasizing at this point that information is spotty but we're bringing you what seems reliable. CNN London News Editor Richard Allen Greene tweeted that the militants forced hostages to wear explosive vests.

Meanwhile France's Le Monde reported that the raid by the Algerian military ended two hours ago with 600 Algerian employees freed and an uncertain number of casualties.

@HannahAllam State Dept: We have no information to share on the Algeria hostage situation. Obv, the American ppl want to know, but can't jeopardize lives

12:34 p.m.: Here's the location of the isolated energy outpost, via Google: 12:22 p.m.: The Associated Press is reporting dozens dead after the Algerian military raided a gas plant at Algeria's In Amenas gas field in the deep Sahara near the Libyan border. The operation was

...an attempt to free dozens of foreign hostages held by militants with ties to Mali’s rebel Islamists, diplomats said. Islamic militants claimed that 35 hostages and 15 militants were killed after Algerian military helicopters strafed the area but said seven hostages survived.

Islamists with the Masked Brigade, who have been speaking through a Mauritanian news outlet, said the Algerians opened fire as the militants tried to leave the vast Ain Amenas energy complex with their hostages a day after seizing the installation deep in the desert.

Algerian officials have confirmed the raid according to the New York Times. It occurred more than 24 hours after the militants took the gas field and hostages. The official said reports of 35 hostages and 15 militants dead were "exaggerated."