Sandy's heroes get the Vogue treatment

The fashion mag's decadent photo spread poses the storm's responders alongside top models. Is it too soon? 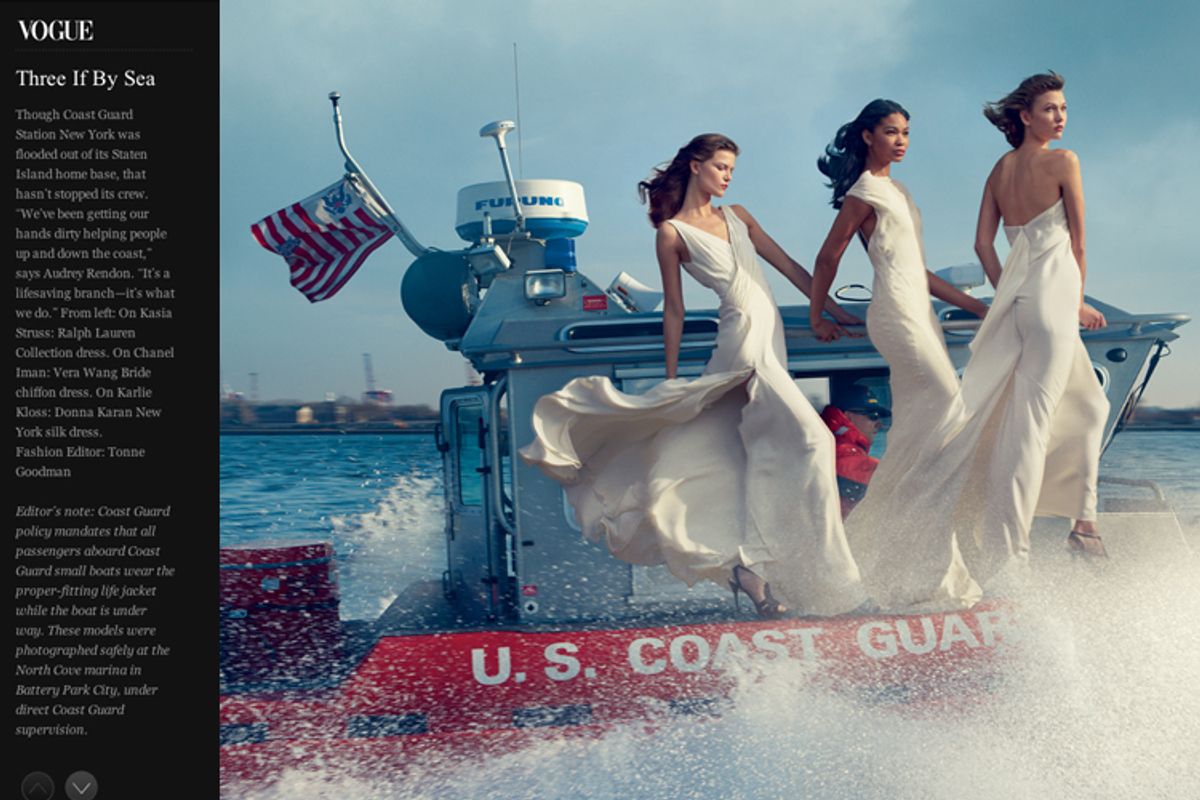 In the new issue of Vogue, Annie Leibovitz shoots key responders to Hurricane Sandy — alongside some of the top models in the industry, dressed in designer togs. There are the models, reclining at the Lexington Avenue Armory while National Guardsmen lift crates of food; there they are pulling just a bit of focus from the neonatal nurses of Bellevue. Ms. Leibovitz even road a Coast Guard response boat in order to nail her shot of three sylphlike models rising from the sea on a military vessel.

It's a jarring juxtaposition -- but maybe not a surprising one for a magazine that has, throughout the tenure of editor Anna Wintour, immersed itself more and more into the world of politics and national affairs. (The last issue, for instance, profiled Newark Mayor Cory Booker, and profiles extolling the virtues of female political figures while polishing them to a fashionable sheen date back to Hillary Clinton, and Wintour's ultimately successful attempt to make her camera-ready.)

Wintour, who's broadened the magazine's sphere of interest and influence, conceived the shoot with fashion editor Tonne Goodman and controversial photographer Leibovitz, according to audio on the Vogue website. But Vogue's engagement with the world is, ultimately, all about Vogue: A profile of DNC Chairwoman Debbie Wasserman Schultz turns the pol into a maybe-airbrushed fashionista in Jason Wu; star Olympians play second fiddle to Karlie Kloss before heading to London; Sandy responders are rewarded for their diligence with the chance to pose with models.

Last year, a model named Nana Gouvea posed amid downed trees and smashed cars as a way to add to her portfolio immediately after Sandy; she was roundly condemned. Vogue's spread is triumphant rather than tragic, in a sense, focused on human accomplishment rather than disaster. And the responders in the photos -- particularly the nurses -- look happy to be recognized. It's Vogue's world, and for the brief length of a photo shoot, mere civilians (even heroic and accomplished ones) are lucky to live in it.